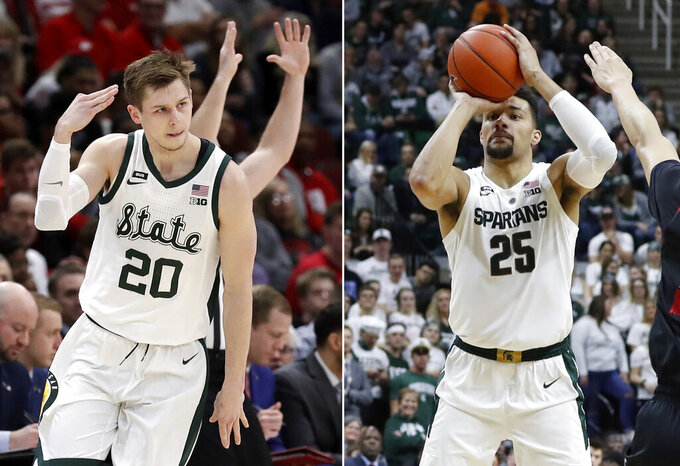 FILE - At left, in a March 16, 2019, file photo, Michigan State's Matt McQuaid (20) reacts after shooting a 3-point basket during the first half of an NCAA college basketball game against Wisconsin in the semifinals of the Big Ten Conference tournament, in Chicago. At right, in a Feb. 20, 2019, file photo, Michigan State forward Kenny Goins shoots during the second half of an NCAA college basketball game, in East Lansing, Mich. Big Ten champion Michigan State is seeded second in the NCAA Tournament in part because seniors Matt McQuaid and Kenny Goins have gone from being role players to standouts.(AP Photo/File)

Matt McQuaid signed with the Spartans, changing his mind after committing to play for Hall of Fame coach Larry Brown at SMU.

For both players, and coach Tom Izzo, it worked out well.

The Big Ten champions are seeded second in the NCAA Tournament in part because both have gone from being role players to standouts.

"I don't think a lot of people believed in me, even in my personal life, but that's the reason I came here," Goins said Monday. "I was pretty much betting on myself. I made it big, I guess. Hit the jackpot you could say."

Goins and McQuaid may have to do a little more than usual Thursday against 15th-seeded Bradley and possibly beyond because junior forward Kyle Ahrens is not expected to play again this postseason. Goins, who primarily plays power forward, could potentially be used at small forward to make up for the absence. Ahrens injured his left ankle during the Big Ten Tournament final against Michigan.

"It's a very, very bad sprain," Izzo said. "He's come back from the dead a couple times, but I'm guessing that he's done."

Michigan State has been done in the first or second round of the NCAA Tournament in three straight years for the first time with its Hall of Fame coach, who has won a national championship in seven trips to the Final Four.

"I know because I set the standard, you're going to be judged on what you do in March," Izzo said.

The Spartans closed the season with 10 wins in 11 games, leaning on Big Ten Player of the Year Cassius Winston along with their two seniors that earned honorable mention recognition in the conference.

McQuaid scored a career-high 27 points and made a personal-best seven 3-pointers on Sunday in a 65-60 win against the rival Wolverines, just over a week after Goins had nine points and 16 rebounds in a victory against them to earn a share of the regular season title.

The 6-foot-5 McQuaid is averaging nearly 10 points a game, shooting 43.3 percent on 3s, and is on the All-Big Ten defensive team.

"Matt McQuaid has spent more time in this place than I have and that's saying a lot," Izzo said. "He's been a great guy, a great teammate, and a guy who has changed and became a defensive player. And his offense has gotten stronger each and every year. He's finally healthy for the last year and a half and, because of that he's improving as a shooter."

The 6-foot-7 Goins is averaging a team-high 8.9 rebounds a game and 8.3 points, trailing just Winston and McQuaid in 3s made, and scored a career-high 24 points late in the regular season against Nebraska. In his second season with the Spartans, Izzo gave the unsung player from Troy, Michigan, a scholarship.

McQuaid rebounded from a disappointment, entering his senior season at Duncanville High School in Texas, when he wasn't invited to LeBron James' camp for high school prospects.

"I told him, 'You can pout about it or you can get to work,'" his father Rob recalled telling him.

McQuaid responded by spending countless hours at his high school, working on his game. The shooting guard was ready to go when he got a call a few days before the camp, giving him a chance to play with future Villanova star and NBA player Jalen Brunson.

"Matt had the best three days of his life with Brunson feeding him passes," Rob McQuaid recalled. "Izzo was watching because he was recruiting Brunson and he told Larry Brown, 'You got a good one.'"

After the camp, Matt McQuaid decided to open up his recruitment again.

"The first call I got was from Izzo," Rob McQuaid said. "When Izzo found out I was from Midland, Michigan, he said, 'I knew it was meant to be.'"