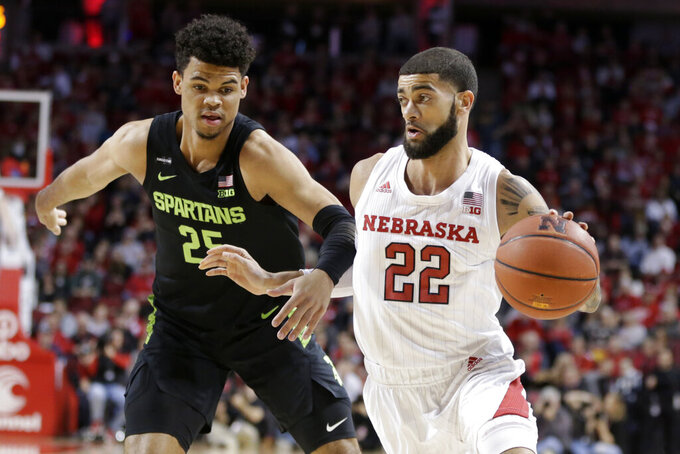 Nebraska's Haanif Cheatham (22) drives to the basket around Michigan State's Malik Hall (25) during the first half of an NCAA college basketball game in Lincoln, Neb., Thursday, Feb. 20, 2020. (AP Photo/Nati Harnik)

The Spartans, who have been struggling for almost a month, had a good shooting night, dominated the boards and got big contributions from reserves Gabe Brown and Kyle Ahrens in the 86-65 win Thursday.

But a season-high 22 turnovers and the inability to put away the Cornhuskers until well after halftime overshadowed the positives in Izzo's mind.

“I can’t be very excited about us even thought it looks like we shot well,” Izzo said. “What we did isn’t going to get us where we need to get.”

Brown had career highs with 17 points and five 3-pointers, and Ahrens had a season-high 14 points in 22 minutes, his most action in the seven games he's been back from an Achilles' and ankle injury. The Spartans were 13 of 27 on 3s and shot 52 percent for the game.

Cassius Winston led the Spartans (18-9, 10-6 Big Ten) with 23 points, but Izzo was troubled by Winston and Rocket Watts combining for nine turnovers.

“We tried to get ball inside, they did a great job of doubling, and we did a poor job of passing,” Izzo said. “I was so disappointed in the turnovers. Everybody charts those differently. They had 16 points off turnovers. What did they score, 65? I thought it was 60 points off turnovers. That’s what it felt like where I was.”

The Spartans finally busted open the game with a 22-8 run in the middle of the second half. Nebraska (7-19, 2-13) dropped its 11th straight game, the most consecutive losses in the same season in program history.

Xavier Tillman, playing three days after his wife gave birth to the couple's second child, had 10 points and 11 rebounds for the Spartans.

Just when it looked like the Spartans might begin pulling away early in the second half, Nebraska converted three straight turnovers into two fast-break baskets and a free throw to pull within 48-46.

Then the Spartans used an 11-1 spurt to take their first double-digit lead, and they went on to win easily.

“It's kind of hard to find motivation, but we just keep trying,” Nebraska's Yvan Ouedraogo said.

Michigan State: The Spartans have been out of the Top 25 for two weeks and came to Lincoln off losses in four of their previous five games, including a gut-punch defeat at home to Maryland on Saturday. They aren't all the way out of the Big Ten race, but now is the time for them to get some wins to enhance their seeding for the Big Ten and NCAA tournaments. Each of their final four regular-season opponents is ranked this week.

Nebraska: The Huskers, who haven't won since Jan. 7, once again hung with their opponent for a half before wearing down over the final 20 minutes. It's not a question of effort. It's a matter of the Huskers being undermanned and undersized.

Izzo gave Jack Hoiberg his first start, a nod to the walk-on guard playing in Lincoln, with his dad, Fred, on the opposite bench coaching the Huskers. Jack took Watts' spot in the lineup and played the first two minutes. He returned with 2:59 left in the game and finished with four points, two assists and one rebound in five minutes.

Izzo said he decided on the bus ride to the arena that he would start Jack “because it’s the right thing to do.”

“This kid has given me three years. I’m big into memory-making moments. If we would have lost, it still would have been the right thing to do.”

Fred Hoiberg said he appreciated Izzo's gesture. Jack had his mom, two brothers, grandparents, aunts and uncles in his cheering section. “Just a real special moment for all of us,” coach Hoiberg said.

Jack, a stalwart on the Spartans' scout team who typically plays only in blowouts, said it was a strange feeling being on the court in Lincoln.

“I would look down at their bench and think this is my first time ever not rooting for my dad’s teams, which is different,” Jack said. “It was fun. I’m sure it wasn’t as fun for him. It was a cool experience.”

Michigan State hosts Iowa on Tuesday in the only regular-season meeting of the teams.

Nebraska visits Illinois on Monday, the only regular-season game between the teams.