Michigan wins 10th in a row at Garden, beats No. 25 Rutgers 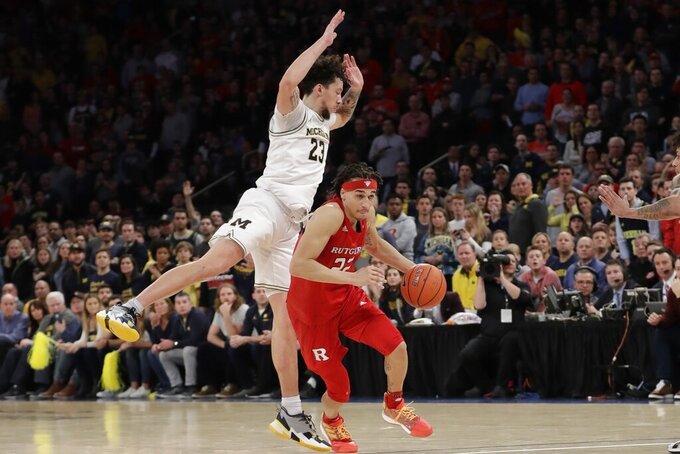 Johns Jr. scored a career-high 20 points and Michigan won its 10th straight in games at the Garden, beating No. 25 Rutgers 69-63 on Saturday.

Including the purple welt that was forming under his right eye while sitting on the dais for the postgame news conference. Bumps and bruises that are becoming regular for Michigan's sophomore big man.

“I guess it’s just normal for me now,” Johns said. “But I'll take it. I’ll give everything to help the team win.”

It also was the Wolverines' first game winning this season when scoring under 70 points. They were previously 0-6.

Mathis had a steal and a fast break layup that put the Scarlet Knights up 38-37 with 17:39 to go. Teske's layup a couple minutes later put the Wolverines ahead, and his 3 with just under 12 minutes left made it 51-42.

Michigan built its lead to 16 points before Rutgers rallied, closing to 65-63 with 19.2 seconds to go when Geo Baker hit a 3 for his only basket of the game.

Mathis had 17 points and eight rebounds to lead Rutgers.

“Every game poses different challenges. You probably had one of the best big guys and point guards in this game. We’ll have different challenges against No. 15 Maryland, two days prep time and get ready to go,” Rutgers coach Steve Pikiell said. “Tomorrow everyone will be enjoying the Super Bowl and we won’t.”

Michigan: The Wolverines have struggled as of late, despite rising to as high as No. 4 in the AP poll after a 7-0 start. Before defeating Nebraska this week, they had lost four in a row and five of the last six. Two wins in a row could get a once-promising season back on track.

Michigan point guard Zavier Simpson returned after serving a one-game suspension for an unspecified violation of team rules, missing Michigan’s win at Nebraska on Tuesday night. That was the first game Simpson had missed in his Michigan career, snapping a streak of 135 in a row. The senior averages 12.8 points and 8.3 assists per game and a team-high 33.7 minutes per game. He had nine points and 10 assists in his return.

After climbing into the rankings, the Scarlet Knights will likely fall out after going 1-1 this week.

Michigan is 22-9 overall in the current Garden, and hasn't lost in the building since falling to Duke in 2008. It wasn’t just Rutgers vs. Michigan in basketball. The two schools had a wrestling match at the Garden prior to the basketball game in the B1G Super Saturday. Michigan won on the mat.

Rutgers: At No. 15 Maryland on Tuesday.