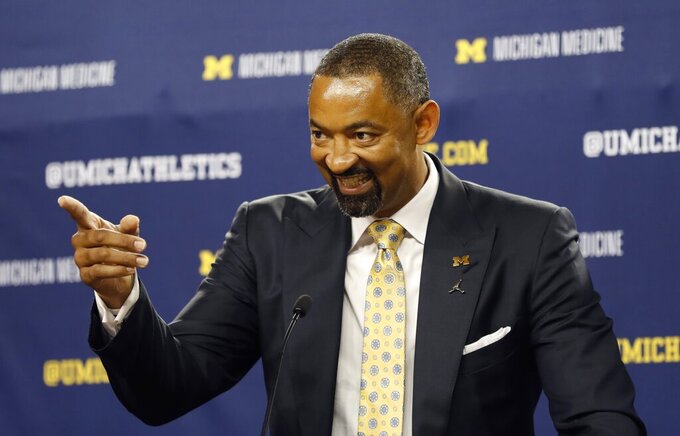 Juwan Howard smiles during his introduction as Michigan's new men's basketball coach, Thursday, May 30, 2019 in Ann Arbor, Mich. The former member of the Fab Five has a five-year contract that will pay him $2 million in his first year. The former Miami Heat assistant coach replaces John Beilein, who left to coach the Cleveland Cavaliers. (AP Photo/Carlos Osorio)

Michigan had many options to replace longtime coach John Beilein.

The Wolverines could have gone with a big-name hire, an up-and-coming young coach or a veteran assistant.

Instead, athletic director Warde Manuel raised at least a few eyebrows in Ann Arbor and beyond by turning to Juwan Howard to run one of the nation's top programs.

Howard played in the NBA and is a Michigan alum, but has no previous head coaching experience.

"I'm going to gamble with people who love this place the way he does," Manuel said at Howard's introductory news conference Thursday.

Michigan's hiring of Howard follows a recent trend of colleges turning to former NBA players to run their programs.

The common thread besides being former NBA players: None had any college coaching experience.

"You've got to start somewhere, don't you?" Howard said.

Hiring an NBA player certainly has its upside.

The high-profile name brings attention to the program and excites boosters. The name recognition and NBA experience attracts recruits, nearly all of whom dream of playing at the next level.

They also have a lot to learn, from recruiting to NCAA rules to the differences between the NBA and the college game.

It doesn't always work out.

Chris Mullin went 59-73 in four seasons at St. John's before stepping down at his alma mater after last year. Avery Johnson led Alabama to the NCAA Tournament in 2018, but was fired earlier this year after the Crimson Tide sputtered and were knocked out in the first round of the NIT by Norfolk State.

Mark Price lasted nine games into his third season before being fired by Charlotte.

Sometimes, it is a success.

Tony Bennett, who played three NBA seasons, has turned Virginia into one of the nation's top programs and won a national championship in April. Bobby Hurley had a successful stint at Buffalo and it has continued at Arizona State, where he has led the Sun Devils to the NCAA Tournament in consecutive seasons for the first time since 1980-81.

Fred Hoiberg led Iowa State to four NCAA Tournament appearances before leaving his alma mater to coach the Chicago Bulls. He returned to the college ranks in March, when he was hired by Nebraska.

The rest have kind of been a mixed bag of results.

Danny Manning had two successful seasons at Tulsa, but has found it a bit tougher going in five seasons at Wake Forest.

Damon Stoudamire is 39-58 in three seasons at Pacific after stints as an assistant at Memphis, Arizona and with the NBA's Memphis Grizzlies.

Hardaway has barely gotten his feet under him on the court, but has made huge strides on the recruiting trail, signing one of the nation's top classes this year.

Ewing increased the Hoyas' win total from 15 to 19 games his second season, but dropped out of the NCAA Tournament conversation by fading down the stretch of 2018-19.

Majerle helped the Antelopes make a smooth transition to Division I, but has yet to take them to the NCAA Tournament despite four straight 20-win seasons.

Howard said all the right things at his introductory news conference, even shed tears of joy over being able to return to coach his alma mater.

Only time will tell if the latest NBA player to coach a college program will work out.