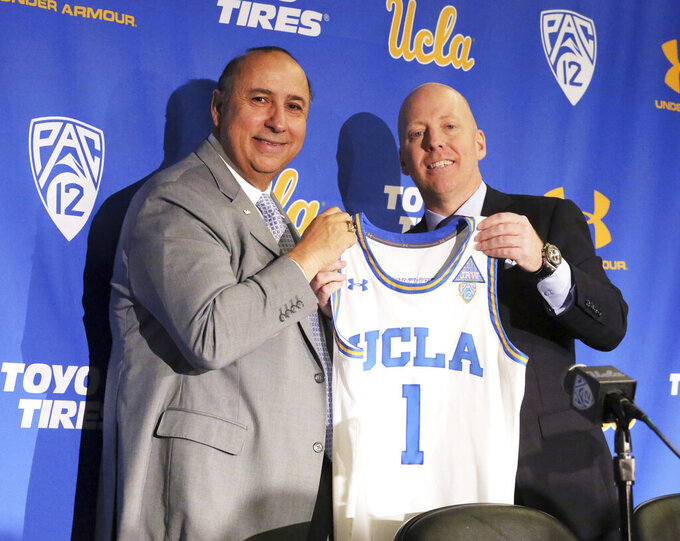 LOS ANGELES (AP) — Mick Cronin lay in bed and watched UCLA basketball games for years, pondering how he would coach the Bruins if he ever got the chance.

He just did, and acknowledged being a bit overwhelmed to be in charge of the House That Wooden Built.

"But trust me, I'm prepared," he told a bevy of former UCLA players and boosters during a news conference Wednesday at Pauley Pavilion.

Athletic director Dan Guerrero presented Cronin with a UCLA jersey with No. 1 and his name on the back.

Cronin turned the jersey from back to front for photographers, saying, "The four letters are more important than my name," which drew applause from the assembled crowd.

Cronin cracked a few jokes, mentioned John Wooden's name early and often, and insisted he didn't get caught up in the school's bumpy coaching search that lasted just over three months.

"I was dealt with nothing but honesty the entire time," he said.

"It was more, let's plant seeds in various places and see what flourishes," said Bob Myers, the Golden State Warriors general manager and former Bruin who was part of the search committee. "This is a job that takes some courage. The expectations here are at the highest level."

Guerrero said Cronin was on the search committee's radar from the start.

"From the moment we met Mick, he conveyed a strong desire to be here," Guerrero said. "He wants to be here to win national championships, something that we all desire."

The Bruins won 10 national championships under Wooden, including seven in a row. They've won one more since the Wooden days, but that was in 1995.

"It's UCLA, I understand the expectations," Cronin said. "You think fans want to win, try being the coach that doesn't sleep. We want to win more."

Myers recalled that during his four-year career the Bruins won the conference title three times and made an Elite Eight appearance.

"We didn't care. Actually, we were trained to not care. In our eyes that was nothing to celebrate," he said. "Fortunately, I was part of the national championship team so I got to see what LA does when we win."

Myers joined several former Bruins for Cronin's introduction, including Jamaal Wilkes and Mike Warren, who both played for Wooden, along with Tracy Murray, Kris Johnson and Sean Farnham. Former Bearcats players Kenyon Martin and Ron Allen were there, too.

Cronin's father, Hep, looked on from a seat beside the divorced coach's 12-year-old daughter, Samantha, and longtime girlfriend Christine.

"We've been coming on vacation to California since she was a child," Cronin said. "This was not a hard sell."

Cronin agreed to a $24.5 million, six-year deal. His contract includes up to $300,000 in team and academic bonuses. It has a reciprocal buyout of $19 million if either side wants out before March 31, 2020. The buyout is reduced in subsequent years.

Cronin didn't waste a minute doing that, calling Wooden "the greatest, most revered college coach of all time."

Cronin can be downright fiery at times.

"He's a very, very passionate guy and that was something we wanted to see in our coach," Guerrero said. "He just blew us away with his vision for what UCLA can be."

Cronin rarely gave an indication that he would leave his hometown of Cincinnati, where he guided the Bearcats to nine straight NCAA Tournament appearances, but only once made it past the second round in 13 years.

"Yesterday was the toughest day of my life professionally, telling a team that you love you're leaving," he said. "I never thought that day would come that I would ever have to have that meeting."

Cronin met briefly with the current roster of Bruins, although he won't have sophomores Kris Wilkes and Jaylen Hands, both of whom plan to hire agents and declare for the NBA draft.

He takes over a team that went 17-16, including 9-9 in the Pac-12, and missed the NCAA Tournament a year after losing in the First Four.

He has yet to finalize his new staff, although he said Darren Savino would join him in Westwood if the associate head coach doesn't get promoted to the Bearcats' top job.

Cronin lingered after his news conference, greeting and chatting up everyone who stuck out a hand. His message resonated with a crowd that has seen attendance drop and interest flat-line in a program that owns a record 11 national championships.

"Get us back to where people say UCLA and they don't write articles saying they're not elite," Cronin said. "UCLA has always been elite."