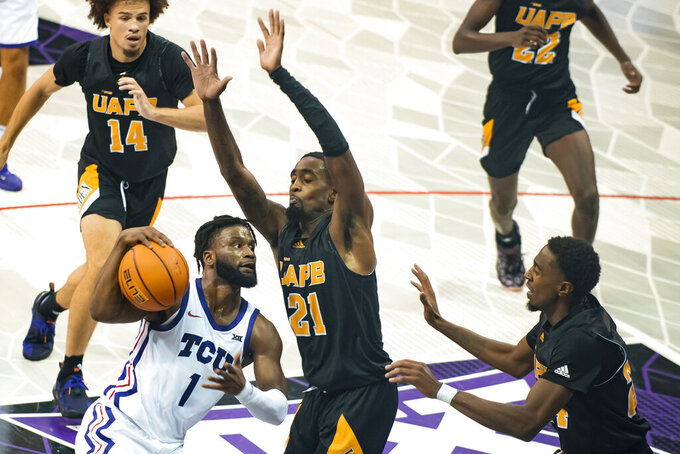 FORT WORTH, Texas (AP) — Mike Miles, Emanuel Miller and No. 14 TCU got an early wake-up call while barely avoiding a season-opening upset.

Miles hit a long 3-pointer with 51 seconds remaining to finally put the Horned Frogs ahead to stay in TCU's 73-72 win over Arkansas-Pine Bluff, a seven-win team last season. Miller sparked a rally right after halftime after the Golden Lions led by 20 points early.

Miles, the preseason Big 12 player of the year, hit from beyond the top of the key for a 71-68 lead. Chuck O'Bannon made two free throws with 19 seconds left, but his miss with 5 seconds remaining gave the Golden Lions one more shot. Trejon Ware's baseline jumper ricocheted off the side of the rim as the buzzer sounded.

Miller had 15 of his 19 points in the second half, and Miles finished with 15 for the Frogs, who were ranked going into a season for only the third time. They returned all five starters and five other scholarship players after winning their first NCAA Tournament game since 1987, when their coach Jamie Dixon was a senior guard for TCU.

“To come out and play like this was just an indicator of our lack of maturity and handling being talked about a little bit," said Dixon, who began his seventh season as coach. "But we did fight down the stretch. We found a way to win, and that was a good sign.”

Shaun Doss had 25 points with four of Arkansas-Pine Bluff's 13 3-pointers. Chris Greene finished with four 3s and 13 points, all in the first 10 minutes of the game, but fouled out with 12 1/2 minutes left.

“I’m proud of our guys. We came in and fought,” second-year coach Solomon Bozeman said. “We had a chance to win it and it just didn’t fall our way.”

The Golden Lions from the Southwestern Athletic Conference, with a completely revamped roster, made 11 3s before halftime. That included four in a row midway through the first half for a 29-9 lead. Greene had the first three, and AC Curry drilled a fast-break 3 with 10:10 left after a turnover by Miller. That was part of a bigger 20-2 run that Doss began with two 3s and a nifty reverse layup.

Miller scored the first nine points of the second half for the Frogs in their 19-4 run to go ahead for the first time since 3-0.

TCU got even at 50 with 13:47 left on Micah Peavy's two free throws after he had a steal and was fouled hard on an attempted dunk. Eddie Lampkin then made a go-ahead layup on a nice pass from Shahada Wells after his steal.

That was only the second lead change of the game. There were six more after that, the last when Miles hit his only 3-pointer.

O'Bannon finished with 11 points, and Peavy had 10.

Arkansas-Pine Bluff: Junior guard Braham Harris and sophomore guard Kylen Milton, who had seven points and 10 rebounds, are the only players back from Bozeman's debut season. Eight transfers and five freshmen make up the rest of the roster. Doss returned to Pine Bluff as a graduate transfer, having spent last season at SIU-Edwardsville after three seasons when he averaged 14 points in 60 games for the Lions.

“We went out and got tough guys, guys that love to be in the gym, great character kids," Bozeman said. "I guess after today you can tell it's paying off.”

Arkansas-Pine Bluff plays its home opener Wednesday. The Lions host Arkansas-based Champion Christian College, the only time they play at home in their first seven games.

TCU plays the second of four consecutive home games to start the season on Friday night when hosting Lamar, which was 2-27 last season.