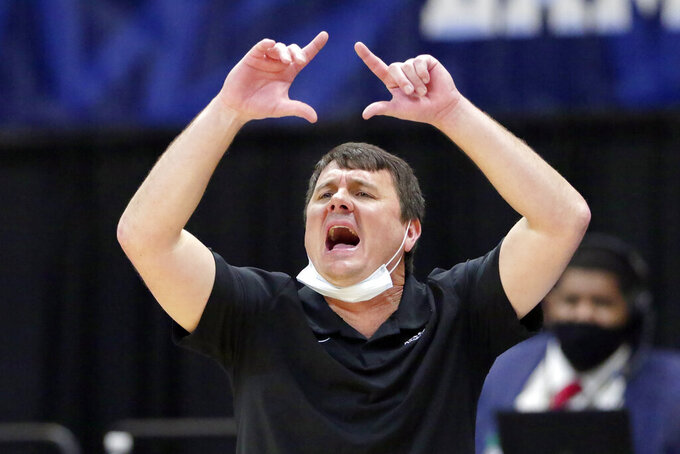 FILE - In this March 12, 2021, file photo, Abilene Christian head coach Joe Golding reacts during the second half of an NCAA college basketball game against Lamar in the semifinals of the Southland Conference tournament in Katy, Texas. Golding has been named the new coach at UTEP after a decade at Abilene Christian that included an upset victory for the Wildcats in the first round of this season's NCAA Tournament. (AP Photo/Michael Wyke, File)

EL PASO, Texas (AP) — Joe Golding was introduced Wednesday as the new head coach at UTEP after a decade at Abilene Christian that included an upset victory over Texas in the first round of this season’s NCAA Tournament.

“That was kind of like icing on the cake. But the cake of Joe Golding is really the remarkable job that he’s done at Abilene Christian University,” UTEP athletic director Jim Senter said when introducing the new coach, adding that Golding’s name kept coming up in the school’s search.

The 45-year-old Golding was 158-144 during his 10 seasons as coach of his alma mater, guiding Abilene Christian’s transition from NCAA Division II to Division I and to the last two NCAA tournaments. The Wildcats were 71-23 overall the past three seasons, including 24-5 this season.

UTEP hasn't been to the NCAA Tournament since 2010, but Golding insisted he doesn't anticipate a long-term process to get the Miners back there.

“I did not come to UTEP to spend 10 years in building this program. This program has already been built," he said. “My job here at UTEP is win in year one.”

Golding replaces Rodney Terry, who left after three seasons to be an assistant at Texas under new Longhorns coach Chris Beard, who left Texas Tech. UTEP was 12-12 this season.

Golding grew up in Midland and West Texas, and said he knows all about the storied history of the program, including the 1966 national championship team and legendary coach Don Haskins. Golding said he “got goosebumps and almost cried” when getting his picture taken Wednesday in front of that championship trophy, and has watched the movie “Glory Road" about 100 times.

During his introduction in the Don Haskins Center, the school's home arena, Golding asked and answered the question about why he was there after building what he had at Abilene Christian.

“Man, look up at the rafters. This place has history, this place has a tradition,” he said. “This place knows how to win and it’s ready to win.”

Golding, who played point guard at ACU from 1994-98, became head coach there in 2011. The Wildcats began competing at the Division I level during the 2013-14 season and five years later made their first NCAA Tournament appearance.