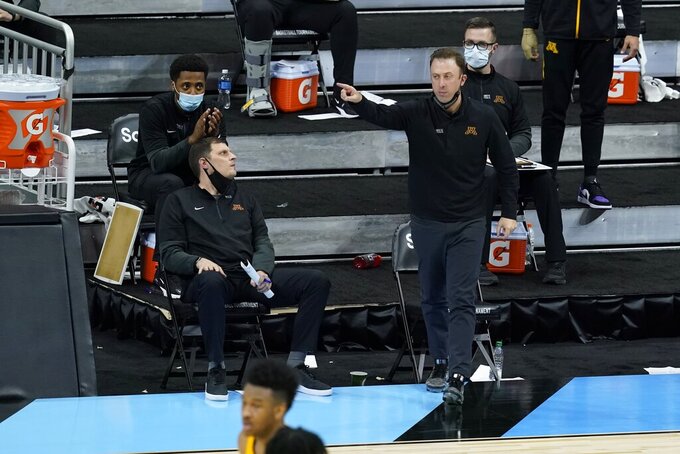 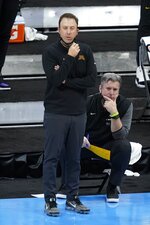 MINNEAPOLIS (AP) — Minnesota fired Richard Pitino on Monday after the coach compiled a 54-96 regular-season record over eight years in the Big Ten and had only three conference finishes higher than 10th place.

The Gophers went 14-15 this season, dropping 11 of their last 14 games. They were 0-10 on the road, one of only three major conference teams in the country without a road win.

Athletic director Mark Coyle was scheduled to address reporters on Tuesday morning. He called Pitino “a tremendous person and coach” in a statement distributed by the university.

“Decisions like this are never easy, but after evaluating this season and the previous eight years of our program under Richard, it is clear to me that new leadership is needed," Coyle said. “We have one of the best practice facilities in the nation, a historic competition venue and a state that produces top-caliber talent. This is an extremely attractive job.”

Pitino wasn't available for comment, but he posted a thank-you message to Minnesota on Twitter on Monday night with a picture of him and his kids at Williams Arena.

“Always wanted to represent Minnesota the right way on a daily basis with class and integrity,” Pitino tweeted. “Fired up for what the future holds!”

According an Albuquerque Journal report, Pitino was among the finalists for the head coach vacancy at New Mexico. If he's hired elsewhere, Minnesota would be off the hook for a $1.7 million buyout, according to the language in his contract that had three years remaining. Payments will stop when Pitino gains “comparable employment,” which is defined in the deal as an NCAA Division I head coach, a head or assistant coach of a professional team, administrator or director of an NCAA Division I program or a commentator for a national broadcasting company.

Pitino’s base salary for 2020-21 was $2 million, below the median in the 14-team conference. Hired at age 30 with one prior year of experience as a head coach at Florida International, Pitino guided the Gophers to an NIT championship in his first season. Only two NCAA Tournament appearances followed, though, in 2017 and 2019.

They were primed to return this year after beating Iowa, Ohio State, Michigan and Purdue — ranked No. 5, No. 9, No. 4 and No. 20, respectively, in the AP poll for March 8 — before injuries to starters Gabe Kalscheur and Liam Robbins accelerated another late-season slide. The Gophers simply didn’t make enough shots to keep up and had to work too hard to get them. In the NCAA Division I rankings as of Friday, they were 13th in 3-point attempts and 334th in 3-point percentage.

Quick-witted and even-tempered, Pitino never pretended to ignore public criticism. After a win over then-No. 6 Maryland in 2016, Pitino quipped he could “start going inside at Starbucks instead of going through the drive-through.” He expressed the same peace after Minnesota lost Thursday in the Big Ten Tournament, anticipating his postseason meeting with Coyle.

“We all have losses. That’s OK. I do have a great relationship with Mark. If he gives me some bad news, that doesn’t mean I’m going to flip a desk or anything,” Pitino said.

The son of longtime college and pro coach Rick Pitino, who was the first to win NCAA championships at two different schools with Kentucky and Louisville, Richard Pitino was picked by previous athletic director Norwood Teague to replace Tubby Smith.

After striking out with Fred Hoiberg, Flip Saunders, Shaka Smart and Brad Stevens, Teague received a strong endorsement of Pitino from Billy Donovan, the current NBA coach who had him on his staff at Florida from 2009-11.

Pitino and his wife and three children became fond of Minnesota despite East Coast roots, but he ultimately failed to forge a strong connection with the state’s high school circuit with Minnesota annually producing high major prospects.

Sure, two of the best players from the 2019 team, Amir Coffey and Daniel Oturu, are both Minnesota natives and now with the NBA’s Los Angeles Clippers. There were too many recruiting misses, though, that left the Gophers with little depth when injuries hit.

One of those whiffs came with the 2017 freshman class, when Pitino and his staff signed Isaiah Washington at point guard from New York and passed over Minnesota native McKinley Wright IV. Wright became the all-time assists leader at Colorado, where he was a three-time All-Pac-12 player. Washington transferred after two seasons with the Gophers.