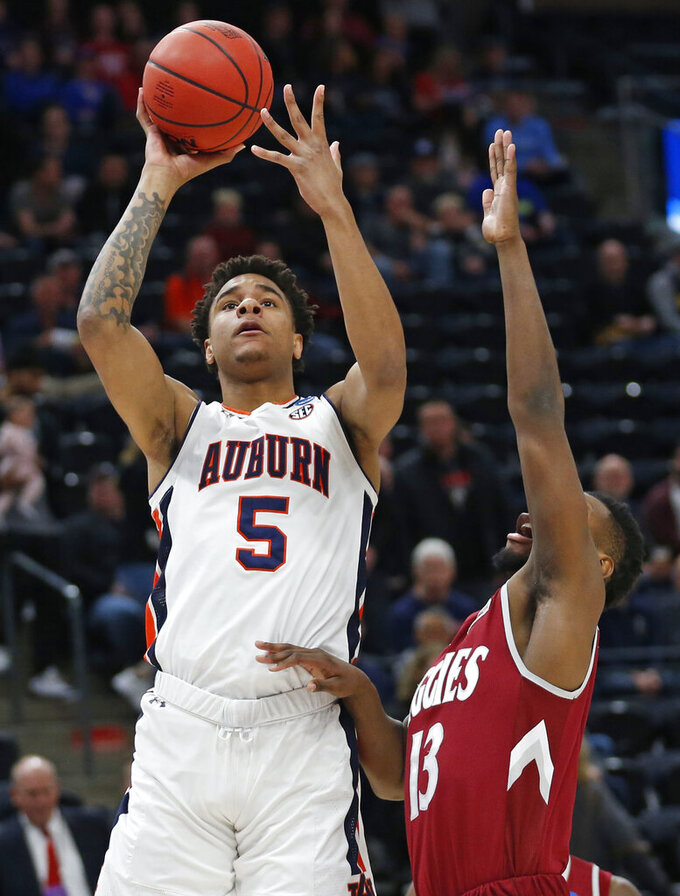 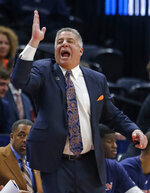 SALT LAKE CITY (AP) — A.J. Harris had an easy layup for the tie. He wanted a win for New Mexico State.

It didn't work out, but boy-oh-boy, what a way for the Aggies to go down swinging Thursday against fifth-seeded Auburn in the NCAA Tournament.

With the clock ticking down, Harris passed on an open layup and kicked out to wide-open teammate Terrell Brown, who was spotted up for the game-winner behind the arc. Brown was fouled as he took the shot, but missed two of three free throws with 1.1 seconds left, and New Mexico State fell 78-77.

It's hard to call the 12th-seeded Aggies losers after their showing in the opening round of the Midwest Region, though.

"I can sit up here and second guess," said New Mexico State coach Chris Jans, "but if he makes the 3, or makes all three free throws, it's an Ali-Frazier moment."

Harris said he knew the Aggies were trailing by two as he took the inbounds pass with 6 seconds left, darted up the left side of the court, sped past J'Von McCormick, and then got a step on Auburn forward Chuma Okeke.

There was nothing but air between the 5-foot-9 guard and the basket as he made his way through the key.

He missed, but took a foul from Bryce Brown, who was late getting out to the arc, and clearly as shocked as anyone to see the ball get kicked back out.

"They have a lot of shot-blockers on their team, so I could see why he would kick it out," Terrell Brown said of his teammate's decision.

With McCormick making the choke sign as Brown toed the line — "I saw in his face, he was pretty scared," McCormick said — the junior guard watched his first free throw clank out. He stepped up again and made the second. Then the third one bounced around the iron before bounding out.

Auburn knocked the rebound out of bounds and New Mexico State's Trevelin Queen had an open look from the wing at the buzzer but shot an air ball.

That huge sigh of relief? It came from Auburn. The Tigers (27-9) led by as many as 13 midway through the second half, and McCormick's three-point play gave Auburn a 73-65 lead with 2:13 left.

It looked like it was time for Auburn to start making plans for Saturday's second round.

Two turnovers, two missed free throws and two Aggies 3-pointers later, the Tigers were fighting for their lives, hoping Brown, a 78-percent free-throw shooter who had more attempts from the line than anyone on his team this season, would miss at least one.

"Until you get in that moment, you don't know how you're going to react," Auburn coach Bruce Pearl said, when asked about the Tigers' near meltdown.

So did New Mexico State.

The Aggies shot 952 3-pointers this season — ninth most in the country. And though the result hurt, chances are, they'd do the same thing again.

"We've got shooters who stay after practice, they work on that shot all the time," Aggies forward Johnny McCants said. "We had open shots the whole game. We just didn't get them to fall."

Auburn had attempted 1,052 3-pointers this season — third most in the country — and kept it going.

All but two of Auburn's six field goals over the final 11 minutes were from 3, and one of those resulted in McCormick's three-point play. The Tigers went 12 for 31 from behind the arc. Jared Harper made all four of his in the second half and led Auburn with 17 points.

Not that the Tigers would trade the SEC Tournament title they won last week. But it is taking its toll. This was Auburn's fifth game in eight days and the Tigers nearly collapsed at the end.

The Tigers will play No. 4 Kansas, an 87-53 winner over Northeastern.