Missouri coach Gates has won over fans, now out to win games 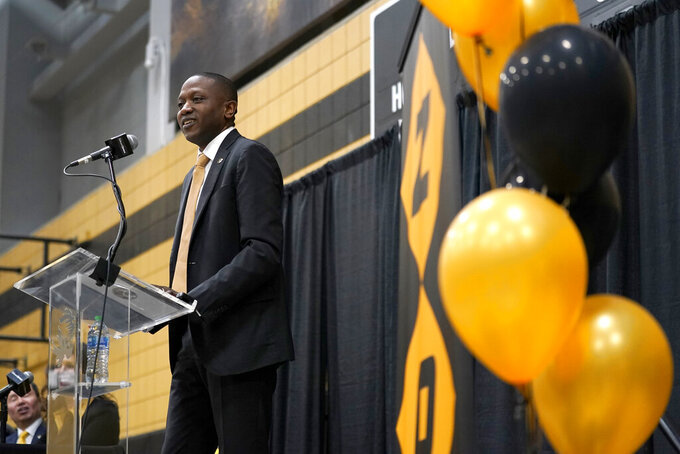 FILE - Dennis Gates is introduced as the new head basketball coach at Missouri on March 22, 2022, in Columbia, Mo. Gates has won over Missouri fans and is quickly winning over recruits, and the next step is to start winning some basketball games. (AP Photo/Jeff Roberson, File)

By almost every account, Dennis Gates won the news conference when he was introduced as the new coach at Missouri, conveying a clear and ambitious vision for a struggling program with unbridled enthusiasm.

He's also been winning on the recruiting trail, quickly improving the Tigers' talent level not only this season but beyond.

The trick for Gates now is to win on the court, and that's something that Missouri has struggled to do for most of the past decade. The rarified air that came with a 30-5 season under Frank Haith seems like a distant memory after his tenure went sideways in a hurry. Kim Anderson and Cuonzo Martin failed to return the Tigers to prominence.

“My expectations is simple, and that’s to get better every day, continue to challenge our staff, but also our student-athletes, and making sure that we’re prepared by April,” Gates said. “When I say April, obviously, the (NCAA) championship game is April 3 in Houston, Texas. And that’s obviously a goal of every team across the country.”

So much for modest expectations.

The Tigers, who went 12-21 last season before Martin was fired, haven't gotten past the first round of the NCAA Tournament since 2010. And they haven't made it to the second weekend since the year before, when they went all the way to the Elite Eight and things seemed to be trending upward.

There have been exceptional players, whether that was Jordan Clarkson or Michael Porter Jr., but not enough of them and certainly not enough on the same team. That's where Gates' focus on recruiting comes in. He instantly saw the need to improve the roster, so he hammered the transfer portal along with the prep ranks, bringing in a whopping nine transfers along with Aidan Shaw, a four-star prospect out of the state of Kansas.

Among the newcomers are Nick Honor, who previously played at Clemson, and a trio who played under Gates at Cleveland State in guards Tre Gomillion and D’Moi Hodge and 7-foot-2 post presence Mabor Majak.

“I always respected the conference, the coaches, and the competition, and it doesn’t just start inside the lines,” Gates said. “It goes into the recruiting. When I was an assistant in the ACC, we recruited against SEC teams. That’s when the games are sort of won, if you can sort of win those recruiting battles well before it begins.”

The Tigers already have three high-level commitments for next spring, and they're actively pursuing four- and five-star prospects for 2024. But for now, the focus has to be on the court, and winning what matters most: games.

“We overanalyze it,” Gates said, “but sometimes that’s where the games are won and lost: with your staff, your recruiting, and putting it all together. And we’re doing a good job."

Kobe Brown, the Tigers' top scorer a year ago, stuck around to help Gates rebuild. So did Ronnie Degray III. But most of the rest of last year's team transferred, giving the Tigers a fresh feeling but also creating a lot of minutes to be filled.

Division I transfers get the attention these days, but Gates' biggest coup may have been persuading the nation's top two junior college players to come to Columbia. Mohamed Diarra is a 6-11 standout from Garden City Community College while Sean East is a 6-3 guard from John A. Logan College.

The 6-foot-8 Shaw, who played prep ball in the Kansas City suburb of Overland Park, just about had his pick of schools coming out of Blue Valley High School. Kansas, Iowa State and Arkansas were among those that offered scholarships. It was a monumental win for Gates when the athletic swingman chose the Tigers over the rest.

Often overlooked when it comes to new coaches are the assistants, and Gates has an experienced associate head coach in Charlton Young. The former Georgia Southern coach helped to develop 13 draft picks while at Florida State.

Missouri opens Nov. 7 against Southern Indiana, the first of seven straight at Mizzou Arena. Then comes a trip to Wichita State and a game against Southeast Missouri before a visit from fifth-ranked Kansas. The Tigers also have the Braggin' Rights game against No. 23 Illinois on Dec. 22 in St. Louis before facing the SEC schedule.

“The storm is coming,” Gates said. “It’s not going to be easy, not for any team. But the team that I believe can keep it all together and get to the end collectively and lean on the tenets or even the mantra at the end will prevail.”