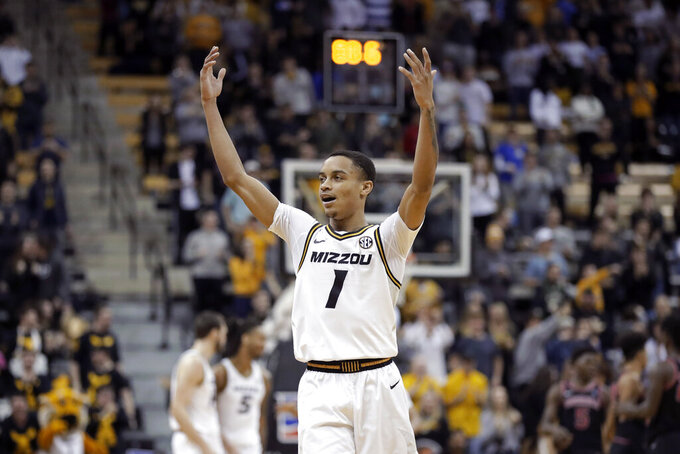 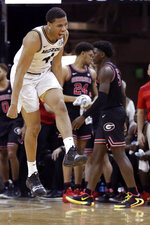 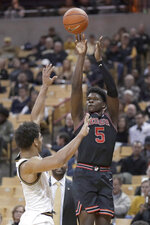 COLUMBIA, Mo. (AP) — Missouri overcame a 20-point deficit in the second half to defeat Georgia 72-69 on Tuesday night in Columbia, ending a four-game losing streak.

The Bulldogs (11-9, 1-6 Southeastern Conference) jumped to an early lead, due largely in part to star freshman Anthony Edwards (18 points per game), who scored 14 in the first half alone to put Georgia ahead 42-30 at halftime.

“I feel like in the first half, we kinda just played and played and let them score, then hope we’d score,” Pinson said. “In the second half, it was more, ‘They’re not going to score, and we’re going to score.’”

Nikko reached a career high with 13 points, 11 of which came in the second half.

“He brought what he always brings: intelligence, leadership as an older guy, battle-tested, a guy that’s committed to a program,” Martin said.

“Momentum is always up for grabs,” Crean said. “And in the second half, Reed Nikko took momentum from us. …Reed Nikko changed the energy of the game for them.”

Edwards played every minute of the game, finishing with 23 points. Georgia’s Tyree Crump and Toumani Camara scored 13 and 12, respectively.

Missouri ran into foul trouble early, finishing the first half with 12. Mitchell Smith and Nikko both finished the game with four.

Martin praised the Tigers’ ability to drive to the rim. The team shot just 28% from field-goal range in its Saturday loss to West Virginia. Against Georgia, that improved to 43%.

The Tigers held leading Georgia rebounder Rayshaun Hammonds to two off the glass. Hammonds had averaged 8.1 rebounds per game prior to facing Missouri.

Missouri freshman forward Kobe Brown said he was hit hard by the news of Kobe Bryant’s death in a helicopter crash on Sunday. Brown’s father, Greg, had met Bryant and named his son after the NBA star. Brown wears No. 24 because of Bryant and called him a role model.

“I was bummed,” Brown said. “It took a toll. I send my regards to all the families that were involved in the crash.”

Missouri guard Mark Smith, who had averaged 11.4 points per game prior to Tuesday, did not play in the second half after an injury in the first. “I thought it was his ankle, but it’s probably his lower back,” Martin said. Mark Smith missed all four of his shot attempts in the first half.

Missouri: After a sleepy start, the team’s late comeback proved enough to break the losing streak and avoid a second straight home loss. Nikko’s offensive production was key, as the team has struggled offensively without forward Jeremiah Tilmon, who hasn’t played since Jan. 4 because of a foot injury.

Georgia: Even with 23 points from Edwards, the Bulldogs’ offense went cold when the Tigers started their comeback. Georgia scored eight points in the last 12 minutes of the game.

Missouri: The Tigers will head to Columbia, South Carolina, to face the Gamecocks on Saturday.

Georgia: The Bulldogs will continue their SEC play against Texas A&M on Saturday at home.