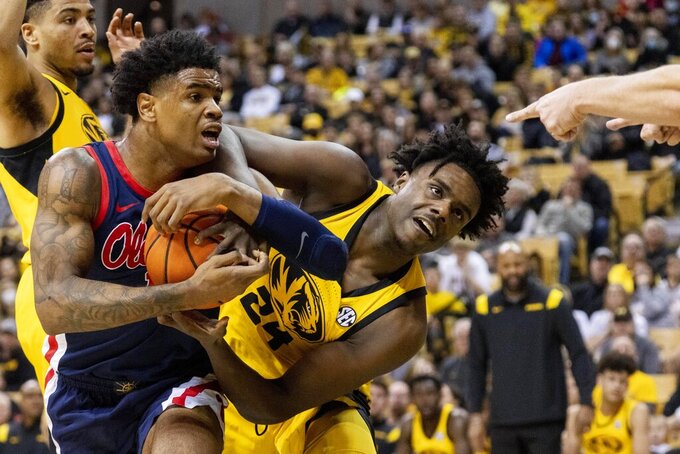 Mississippi's Luis Rodriguez, left, and Kobe Brown, right, look at a referee as a jump ball is called during the first half of an NCAA college basketball game Saturday, Feb. 12, 2022, in Columbia, Mo. (AP Photo/L.G. Patterson) 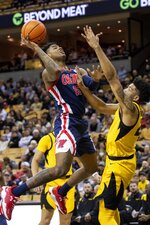 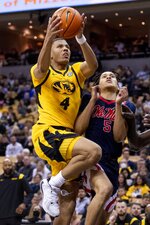 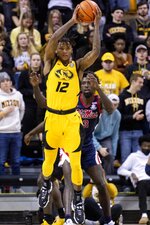 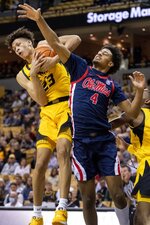 DaJuan Gordon, Kobe Brown and Amari Davis added 13 points apiece for Missouri, which shot 54 (28 of 52) from the field and was 7 of 14 from long range. Gordon made three 3-pointers and Brown had five assists.

Missouri closed the first half on a 15-4 run for a 43-32 lead. Gordon made a pair of 3-pointers, Brown added a 3 and Pickett scored the last six points during the stretch. The Tigers scored the first nine points of the second half to extend the advantage to 20.

Ole Miss pulled within single digits with about five minutes remaining and later used a 12-5 surge to cut the deficit to 69-64 with 1:30 left. But Joiner then missed a jumper and Murrell a 3, and the Tigers made 5 of 6 from the line to seal it.