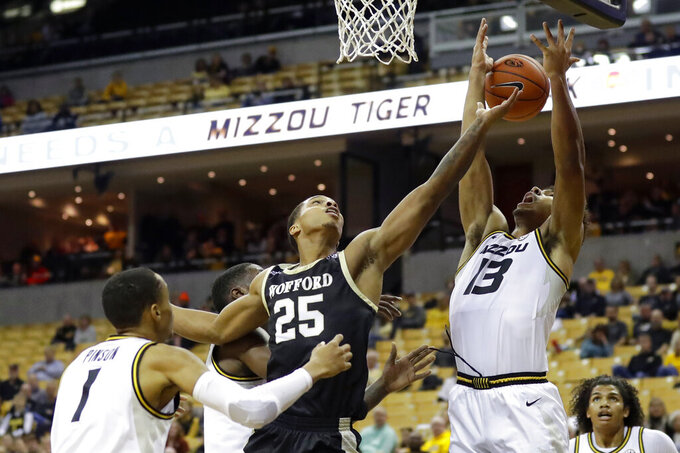 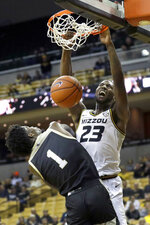 COLUMBIA, Mo. (AP) — In Cuonzo Martin’s third year as Missouri’s coach, the Tigers are adopting the personality of their defensive-minded coach. Missouri held Wofford without a field goal for the final 14½ minutes of a 75-56 victory on Monday.

“We have a team that’s built to defend like that,” Martin said. “I think the biggest key is simply taking pride in what it means to be an elite defensive team, because that’s our goal.”

“Coach says defense is about heart and mental toughness,” said Mark Smith, who led Missouri with 19 points. “Anyone can play hard and do the best they can, and I think it’s just expected on our team.”

Jeremiah Tilmon scored 16 and Xavier Pinson finished with 10 points for the Tigers (3-1).

Tilmon, a junior forward, asserted himself early — he made the first 3-pointer of his career — on his way to seven first-half points. The lead changed hands six times in a back-and-forth first half before Dru Smith dished a nice pass to Parker Braun for a layup and then muscled in for a leaning jumper to help the Tigers take a 36-31 halftime lead.

Pinson helped the Tigers break the game open midway through the second half. It was tied at 45 when he created space with a crossover dribble and hit a jumper. He fed Mark Smith for a 3-pointer. Then Pinson made a steal and swooped in for a dunk. He added two free throws on the next possession to give the Tigers a 54-45 lead with 11:05 left.

After shooting 50% from the field in the first half, Wofford made only 19% after the break. Storm Murphy and Chevez Goodwin each scored 10 for the Terriers.

Martin said he told his players to tightly contest Wofford’s 3-point shooters and not worry about helping if the Terriers drove to the basket. He said Wofford’s players usually drive with the intent to pass, so it’s counterproductive to leave a player open to help defend the rim.

“They pressure you really well,” Wofford coach Jay McAuley said of Missouri’s defense. “Any time you can disrupt timing and disrupt some options, as you could see in the second half, we didn’t handle that too well and got frustrated.”

TWO POINTS ARE BETTER THAN ONE

Martin said he likes to play Smith and Pinson together, especially late in games.

“Both can make free throws, make shots, make decisions,” Martin said. “We need both of them to be elite defensively, and they’re making strides.”

Wofford: The Terriers outrebounded the Tigers 31-23, which was a surprise given Missouri’s size advantage at every position. “To outrebound an SEC team, is a step forward for us,” McAuley said.

Missouri: By playing Wofford, the Tigers got an idea how they might stack up against Butler, a team they play next week in the Hall of Fame Classic in Kansas City. Butler beat Wofford 80-61 on Saturday, the same margin as Missouri’s victory over the Terriers.

Missouri: The Tigers play Morehead State on Wednesday at home.