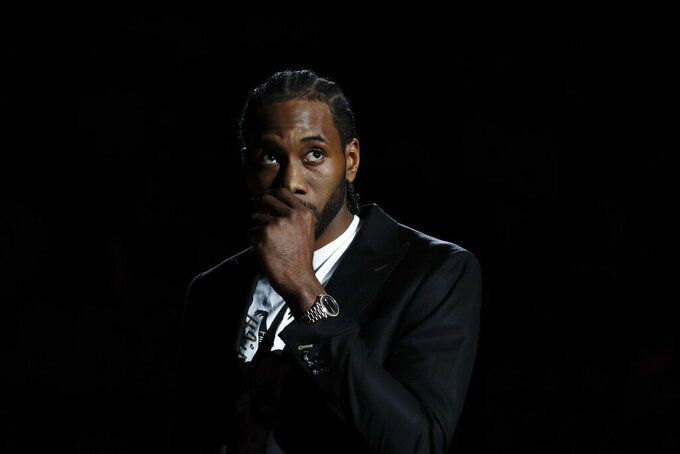 SAN DIEGO (AP) — With Kawhi Leonard watching from one baseline, Matt Mitchell scored 24 of his season-high 28 points in the second half — including three straight 3-pointers — to help rally No. 4 San Diego State to an 80-68 victory against Utah State on Saturday night and remain the nation's only undefeated team.

San Diego State retired Leonard's jersey at halftime and looked to be in trouble, trailing 39-31 after going cold for seven minutes and allowing the Aggies to go on a 14-0 run.

Leonard, who led the Aztecs to their greatest season nine years ago, watched as another Aztec from Riverside, Mitchell, helped save the night. Mitchell spent one season at Riverside’s King High — Leonard’s alma mater — before transferring.

Yanni Wetzell then had a steal and layup, and Mitchell made two free throws to extend the lead to five.

Utah State (17-7, 6-5) ended a two-minute scoring drought on Sam Merrill's 3-pointer. Utah State tied it at 54 on Merrill's jumper, but Mitchell hit two free throws to give SDSU the lead.

Wetzell later hit a 3, and Mitchell hit a jumper to just beat the shot clock, and then drained a 3 for a 66-58 lead.

Malachi Flynn and KJ Feagin scored 13 each and Wetzell had 11 points and 10 rebounds.

Merrill had 16 points and Brock Miller 15 for Utah State.

SDSU led 22-17 when Leonard walked to his seat on one baseline during a timeout with 10:34 to go in the first half. Mitchell hit a jumper to make it 24-17, and the Aztecs then went cold.

Queta Neemias made a hook shot to start the Aggies' run and Miller and Merrill hit 3s to take a 31-24 lead. SDSU finally broke its drought when Feagin hit a 3-pointer.

The Aztecs unveiled Leonard's No. 15 jersey during a halftime ceremony that included former coach Steve Fisher. Fisher called it “the senior night I never got to have with you ... This is your legacy, my friend. Look around this building." Leonard, who played two seasons at SDSU, called it “a dream come true" and thanked Fisher, his former teammates, the student section and his Los Angeles Clippers teammates. The entire Clippers team, including owner Steve Ballmer and coach Doc Rivers, attended the ceremony.

There was a moment of silence for Kobe and Gianna Bryant, and the seven others killed in the helicopter crash last Sunday. The game clock showed 24:24, the shot clock 24 seconds and the scoreboard showed 8.8.

Utah State: The Aggies were the unanimous pick to win the MWC title but have struggled in league play and came into this game in a four-way tie for third place.

San Diego State is at Air Force on Saturday night.