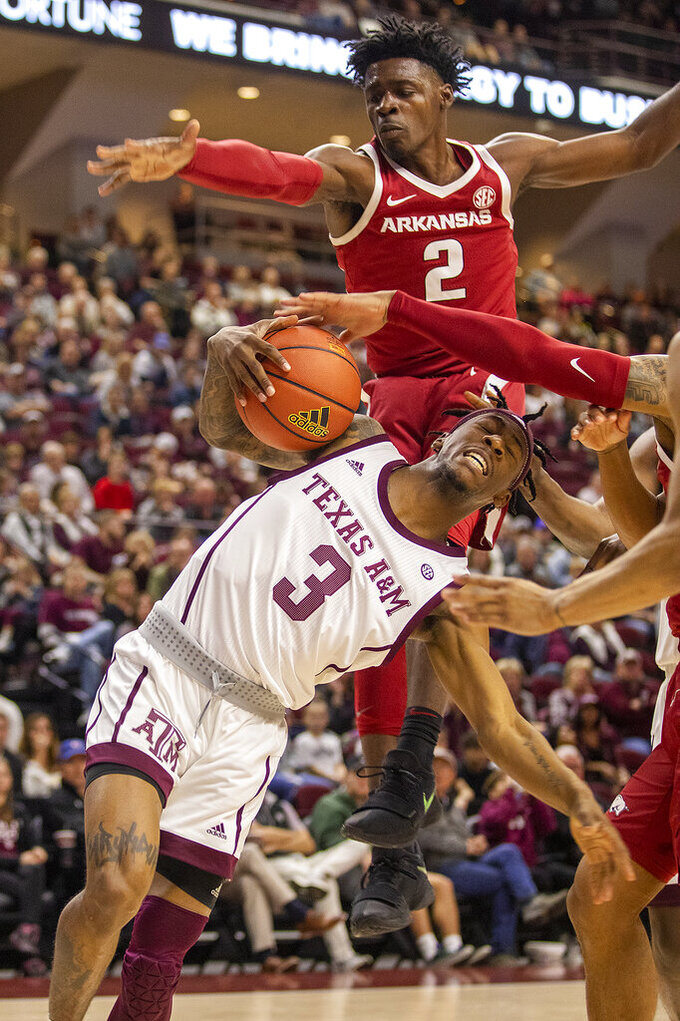 “We closed out our careers at home the right way,” Nebo said. “It was a happy moment for both of us.”

The Aggies (16-14, 10-8 Southeastern) trailed 28-21 with a little more than three minutes remaining until halftime before outscoring the Razorbacks 12-2 headed to the locker room. A&M’s scoring flurry was capped by Nebo’s offensive rebound and dunk as time expired in the first half.

“We haven’t been very good the last four minutes at the end of first halves,” Arkansas first-year coach Eric Musselman said. “Tonight was another one of those nights.”

Emanuel Miller made four free throws and Mitchell made two layups in that span in shoving the Aggies to a surprising halftime lead.

“An amazing boost,” Mitchell said of the Aggies’ outburst to close the first half. “That was the most energy I’ve ever seen from my teammates.”

The Aggies outscored the Razorbacks 44-39 in the second half, despite Mason Jones scoring 30 points for Arkansas (19-12, 7-11). Jones recorded his ninth 30-plus point game of the season, and Isaiah Joe added 22 points for the Razorbacks. The duo combined to make 14 3-pointers.

“We’ve kept figuring out ways to win,” Nebo said of A&M closing out the regular season by winning five of seven games.

Arkansas: The Razorbacks started the season 12-1 under first-year coach Eric Musselman but wound up with a losing record in league play. Still, they won three of their last five games to close out the regular season despite Saturday’s setback, and fans have reason for optimism moving forward under Musselman.

Texas A&M: The Aggies wrapped up a successful regular season under first-year coach Buzz Williams, finishing with a winning record in SEC play for the first time since 2016. When A&M lost to Harvard, Temple, Fairfield and Texas in four straight games in late November and early December, some fans wondered if the Aggies would win a league game. They wound up winning 10, their most since finishing 13-5 in 2016.

Guard Quenton Jackson collected the Aggies’ dunk of the year on a lob pass from Mitchell to shove A&M to a 71-60 lead with 2:13 remaining. Jackson reached back and threw down the slam from the left side, sending the Aggies bench into hysterics.

The Aggies shot more than twice as many free throws (31) as Arkansas (15) and were plus-8 from the foul line.

Arkansas: The Razorbacks are the 11th seed and face 14th-seed Vanderbilt Wednesday night at the SEC tournament in Nashville.

Texas A&M: The seventh-seeded Aggies play No. 10 Missouri in the quarterfinals of the SEC tournament in Nashville on Thursday.