Mizzou leans on experience as it heads into uncharted season 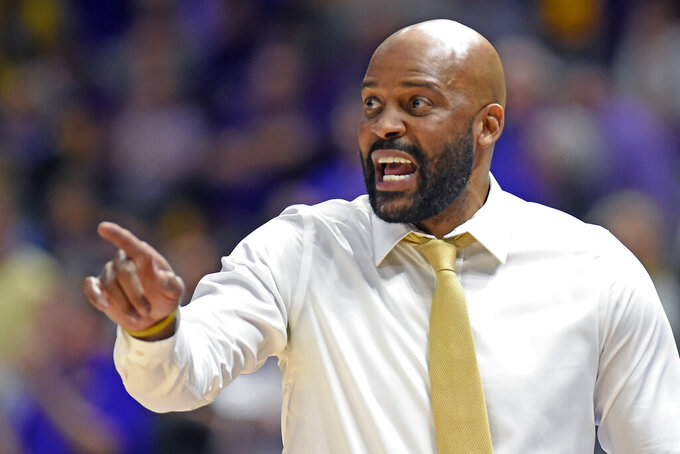 Missouri head coach Cuonzo Martin shouts instructions to his players in the second half of an NCAA college basketball game, Tuesday, Feb. 11, 2020, in Baton Rouge, La. Tigers coach Cuonzo Martin sees only positives in having so many guys back, though, particularly for a season in which everybody must expect the unexpected. (AP Photo/Bill Feig)

COLUMBIA, Mo. (AP) — There are two ways to look at Missouri's basketball program as it heads into the new season.

One way is to look at the Tigers' experience: They have 88.2% of their minutes back, their top eight players when it comes to minutes per game and the most veteran — and arguably deepest — team not only in the SEC but perhaps the country.

The other way: All of that experience netted the Tigers just 15 wins before last season was shut down in the middle of the conference tournament season because of the pandemic.

Coach Cuonzo Martin sees only positives in having so many guys back, though, particularly for this season. The lack of an offseason underscores the value of experience, and depth will be prized given a team could lose multiple players for long stretches if they return a positive coronavirus test.

“I like our experience so far,” said Martin, who went 20-13 in his first season in Columbia but has followed that with back-to-back losing seasons. “I think our guys have worked hard, even through COVID. I think the guys had good summers, even the ones that were at home, just working out, training. I like our team. And experience helps, especially if you learn from it.”

The only starter the Tigers lost was Reed Nikko, who averaged a mere 4.9 points, and seldom-used reserve Tray Jackson is the only other departed player. That means senior guards Mark Smith and Dru Smith, senior forward Jermiah Tilmon — who flirted with the NBA before returning to Columbia — and junior guard Xavier Pinson form the backbone for a team that has been through the college basketball grind.

They aren't the only ones with experience, though. Senior forward Mitchell Smith and junior guard Javon Pickett played important minutes, as did junior guard Torrence Watson, while sophomores Kobe Brown and Parker Braun — who Martin was quick to cite as the Tigers' most improved player — shed the rookie moniker last season.

Then there's the newcomers: freshman Jordan Wilmore is a redshirt candidate, but Drew Buggs could slide into the lineup as a grad transfer from Hawaii and Ed Chang has a couple of years of junior college work on his resume.

The key to the season, though, could be whether Tilmon lives up to expectations. The heralded recruit has struggled with injuries, inconsistency and foul trouble throughout his career. Tilmon appeared in just 17 games and averaged less than 20 minutes last season.

“You know, when I played in college, you knew that guy was a senior because of how he looked and how he talks and how he moves,” Martin said. “And that says a lot about the wisdom and knowledge that is gained over time.”

If nothing else, the Tigers have plenty of wisdom and knowledge on their bench.

Missouri pushed the renewal of the Border War against Kansas and another nonconference game against Utah to next season because of the COVID-19 pandemic. The Tigers also were supposed to play in two tournaments but both were canceled.

As a result, the Tigers reached the mid-point of November with their schedule still in flux. They have just five nonconference games solidified: the opener against Oral Roberts and games against Liberty, Bradley, TCU and Wichita State.

Pinson began last season on the bench but was arguably the Tigers' top player down the stretch, hitting double-figures in scoring in nine of the final 12 games. During one four-game stretch, he set a career high three times.

“X is one of those guys that plays all the time," Martin said. “He's going to find a gym and work.”

The Tigers shot just 29.7% from the perimeter last season, one of the worst marks in major college basketball, and they're hopeful that Buggs can help. He was a dynamic distributor during his time at Hawaii, and his ability to get into the lane, draw defenders and find the open man could create better 3-point opportunities.

"He really gets into the paint and looks for the open guy,” guard Mark Smith said. “I feel like he just has a different confidence to him. He plays with a good pace, and he’s always looking for an open man, so he’s fun to play with.”

It remains to be seen how many fans will be allowed in Mizzou Arena — and everywhere else — and whether it will affect the Tigers' dramatic home-road split. They've gone 21-11 at home the past two years but just 9-22 away from Columbia.