Mobley scores career-high 24 in No. 15 USC's win over Cal 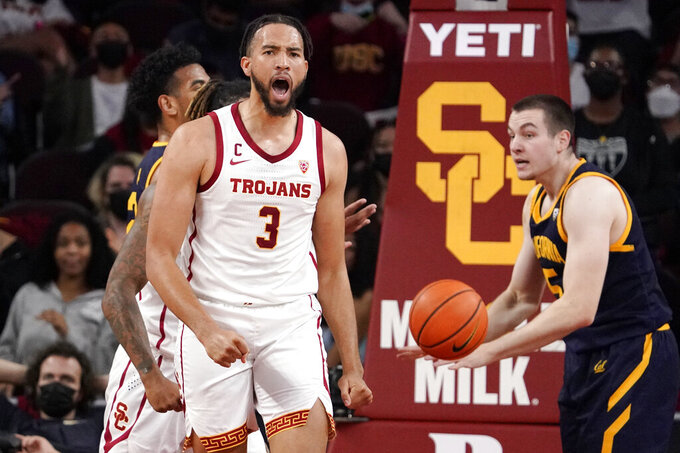 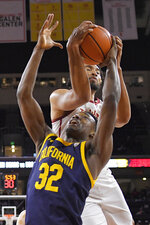 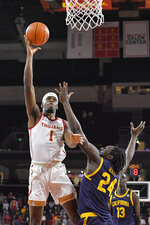 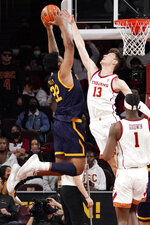 Mobley bounced back after missing three key shots in the final minute during Thursday's loss against Stanford, including a potential game-tying 3-pointer on the final possession.

“It wasn't his fault that we lost Thursday night but for as good a player as he is, that game was tough for him,” USC coach Andy Enfield said. “I thought you saw what kind of person and player he is today. He came out, was aggressive on both ends of the court and played a great basketball game.”

The 6-foot-10 junior, who leads the Pac-12 in rebounding and is sixth in scoring, was 9 of 21 from the field and also grabbed six rebounds. He provided some breathing room with 1:06 remaining when he hit a jumper as the shot clock expired to put the Trojans up 74-69.

“He’s a great player. We have a great belief in him and know what he is capable of,” Ellis said.

It was Mobley's fifth game this season with at least 20 points. His previous career high was 23 against Eastern Kentucky on Dec. 7.

Ellis was 8 of 10 from the field in 37 minutes. The junior guard had six points during a 21-4 run during the first half that allowed the Trojans to take control.

Makale Foreman paced Cal with 13 points while Jordan Shepherd, Jalen Celestine and Andre Kelly scored 12 apiece. Cal was 28 of 56 from the field, becoming the second team to hit 50% or better against USC.

The Golden Bears (9-12, 2-8) have dropped seven straight. They trailed 41-35 at halftime and got within one a couple points during the second half, but were never able to put together any sustained runs.

USC's largest lead in the second half was eight with eight minutes remaining, but Cal was able to rally and get it within a possession at various points during the final five minutes.

“We were very deliberate, got good shots in the first half, spread it around and had a good start,” Cal coach Mark Fox said. “I wish we could have held the lead there at the half. We just couldn't quite do it under the circumstances.

“That was a hard fought, physical game. We are going to need time to recover.”

KEY TO THE GAME

USC committed only four turnovers and snapped a seven-game streak where it had committed at least 10. It is the fewest turnovers by the Trojans since they had three at UCLA in 2019.

“The (14) turnovers hurt us against Stanford. It was the difference in that game. It was a point of emphasis today,” Enfield said.

Cal made eight of its first 10 shots and held USC scoreless for 4 1/2 minutes to jump out to a 20-9 lead eight minutes into the game.

“In big games we're not going to keep being punched first. We have to hit them first, especially at home. We have to figure it out as a team,” Ellis said.

California: The Golden Bears are in the midst of playing five games in a 10-day span from Jan. 27 through Feb. 5. It was also the fifth time in the past seven that they have faced an opponent ranked in the top 15.

USC: The Trojans went 4-1 during their stretch of five games in 10 days. Thursday's loss to Stanford though could result in them dropping a couple places when the updated AP Top 25 poll is released on Monday.