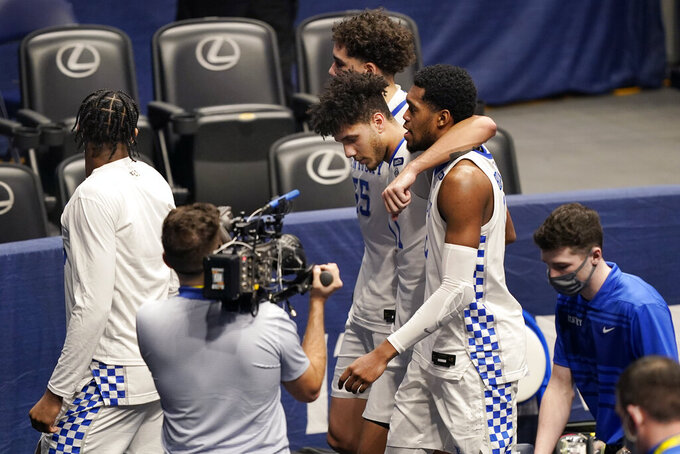 NASHVILLE, Tenn. (AP) — Iverson Molinar scored eight of his 21 points in the final 3:07 to erase a five-point deficit and Mississippi State held off Kentucky 74-73 on Thursday in the second round of the Southeastern Conference tournament.

Mississippi State made just 3 of 14 from 3-point range until Molinar sank 3s on two straight possessions to retake the lead at 72-71 — after leading by as many as 15 earlier in half. He had a 3 roll off on their next possession and Olivier Sarr gave Kentucky a 73-72 lead at 1:18.

Molinar, an 81% free-throw shooter, made two with 7.1 seconds left for a one-point lead. Davion Mintz dribbled it down the court and found a hot-shooting Dontaie Allen on the wing but the shot bounced off the rim.

Mississippi State (15-13) advances to face top-seeded and No. 6 ranked Alabama on Friday. The Bulldogs lost both of the regular-season meetings, by eight and five points.

Kentucky (9-16) will not play in the NCAA Tournament, along with Duke — marking the first time both programs missed it in the same year since 1976.

Mississippi State dominated the inside in the first half, outscoring Kentucky 36-12 in the paint and outrebounding them 29-15. Six-foot-11 senior Abdul Ado scored 12 first-half points, and forward Tolu Smith had nine points and seven rebounds. Ado made all six of his shots as the Bulldogs shot 57.6% while holding Kentucky to 32.4%.

But Allen, a freshman, led Kentucky's second-half comeback with 20 of his 23 points and five of his six 3-pointers.

Allen sank his sixth 3-pointer with 6:22 remaining to give Kentucky its first lead of the game at 65-64, capping a 12-2 run. And a minute later, Mintz made his fourth, following an offensive rebound, to make it 71-66.

Kentucky made seven of its first 11 3-pointers of the second half.

Mintz had 16 points and eight assists and Sarr added 14 points for Kentucky. Terrence Clarke, a top-10 national recruit in the 2020 class, played in his first game sine Dec. 26 due to an injury and scored two points in 10 minutes.

Allen scored a career-high 23 points with seven 3-pointers in the only regular-season meeting between the teams — a 78-73 double-overtime victory for Kentucky on Jan. 2. Kentucky coach John Calipari was ejected after being issued consecutive technical fouls with 9:04 left in regulation