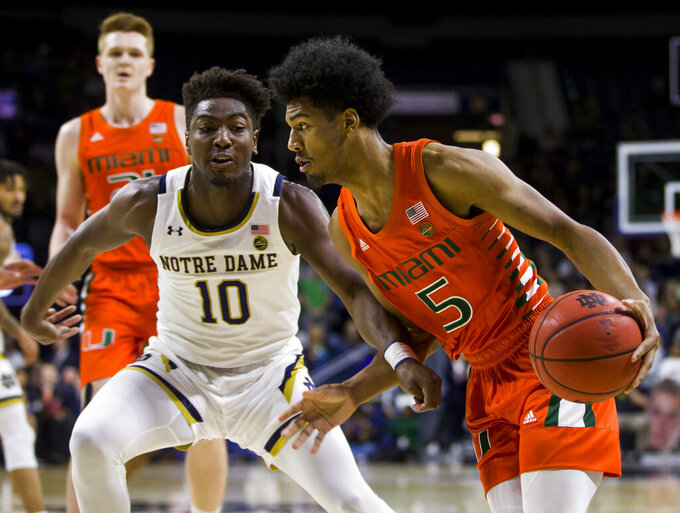 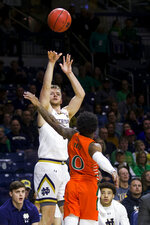 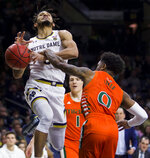 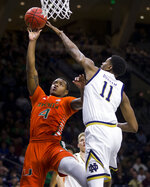 The sophomore point guard had 15 points 10 assists for his second career double-double as the hot-shooting Irish rolled to an 87-71 victory Sunday over Miami.

“It’s all thanks to my teammates,” Hubb said. “They handled the shots, especially when Mooney and the other guys are running in transition. They just make it easier to get a double-double.”

Dane Goodwin chipped in 14 points off the bench.

DJ Vasiljevic, Isaiah Wong and Harlond Beverly each scored 12 points for the Hurricanes (14-13, 6-11), who saw their three-game win streak snapped.

The Irish converted 14 of 31 from 3-point range and finished with 21 assists on 32 field goals and committed just seven turnovers.

Those numbers were even gaudier during the first half as Notre Dame built a 48-29 lead by the break on 10-of-18 shooting outside the arc and 13 assists against no turnovers.

“Nobody plays like us,” Irish coach Mike Brey said, referring to his team’s nation-leading assist-to-turnover ratio of 1.72 entering the night. “Our assist-to-turnover has always been very good, (but) these numbers are off-the-chart kind of stuff. When you have 13 assists, no turnovers … and everybody can pass it. Our big guys are good with the ball.”

The Hurricanes’ switching defense was somewhat effective early, but was no answer in the long haul.

“That’s why they get so many assists,” Miami coach Jim Larranaga said of Notre Dame not settling for shots off the bounce.

“They’re a catch-and-shoot team,” Larranaga said. “Guys like Prentiss Hubb and T.J. Gibbs in particular not only make those 3s, but they make them from like NBA range, which stretches your defense out, which provides them the opportunity to post a Mooney or Juwan Durham inside. They’re completely isolated one-on-one, and those guys are good offensive players, too, so they score around the basket at a very high level.”

Miami: Barring an automatic NCAA Tournament berth by winning the ACC Tourney, the Hurricanes are scrambling for even an NIT bid. They don’t have to finish over .500 by rule, but achieving that optic would help as they head into their final three regular-season games — all against teams above them in the standings.

Notre Dame: The Irish continued to make a late push toward NCAA Tournament at-large consideration. If they can win their four remaining regular-season games, including No. 8 Florida State at home, they’ll head into the ACC Tourney with 21 victories. Working against them is an 0-5 mark so far against ranked teams and no wins against currently over-.500 ACC clubs.

Hubb sent his former Gonzaga (District of Columbia) High School teammate, Chris Lykes, sprawling backwards to the ground with a vicious crossover move and step-back 3-pointer at just over three minutes left in the game.

Lykes stayed down for several minutes, with Larranaga saying after the game that his junior point guard suffered a turf toe injury to both feet and adding that “he’s going to be day-to-day.”

After the game, Hubb stayed humble over a play that had Irish fans oohing and aahing.

“I don’t think it’s bragging rights,” Hubb said, “because he probably did it to me more times than I did it to him in high school. I really do hope he’s OK.”

Lykes, Miami’s top scorer on the season at 15.5 points going in, was limited to eight on 4-of-11 shooting.

A year ago, Hubb had just two points on 1-of-6 shooting and two assists with six turnovers in his first collegiate matchup with his ex-teammate, while Lykes had 11 points in a 62-47 win.

“I know he wanted to play well,” Brey said of Hubb, “because Chris beat him up, treated him like a young guy last year, but he’s such a winner, and his decisions with the ball today, he was (like 2018 NFL MVP Pat) Mahomes.”

At just over 10 minutes to go, Beverly made a nifty strip-steal and took off for an uncontested dunk, but left it embarrassingly short.

Notre Dame snatached the rebound and snapped off a couple crisp passes in transition for a Mooney dunk in the face of a Hurricane defender.

It was the runaway play of the night, until Hubb’s killer crossover.

Miami: The Hurricanes are off until heading to Georgia Tech on Saturday.

Notre Dame: The Irish visit Boston College on Wednesday, looking to avenge a 73-72 home loss to the Eagles in December.