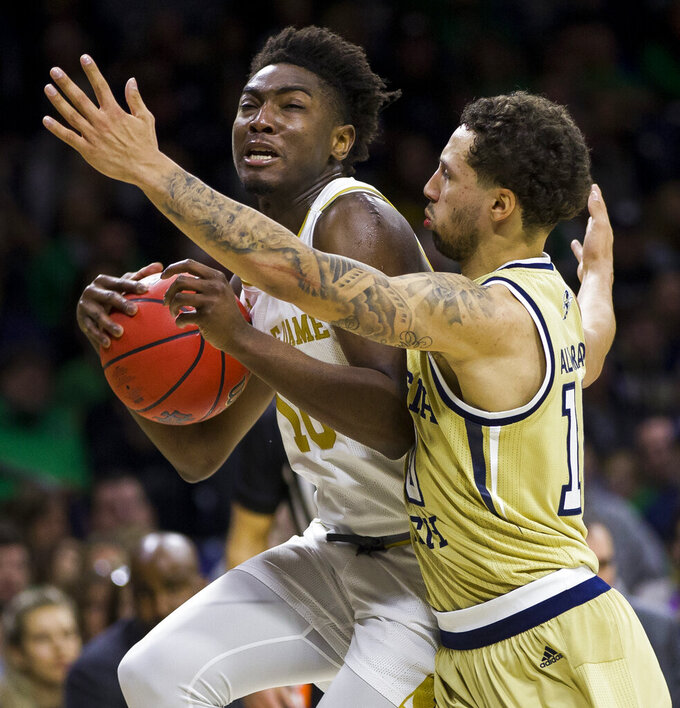 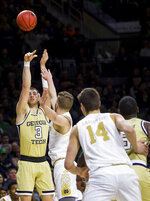 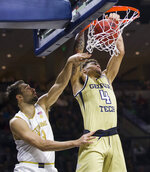 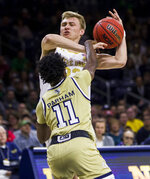 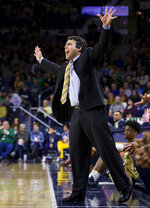 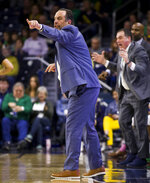 Saturday after the 6-foot-9, 245-pound senior forward's 28 points and 10 rebounds led the Irish to an 80-72 triumph over Georgia Tech, Brey's coaching counterpart Josh Pastner might have been looking for kryptonite.

“I can't wait for him to move on,” Pastner said after the Fighting Irish (13-8, 4-6 Atlantic Coast Conference) won their second straight home contest and completed a regular-season sweep of the Yellow Jackets (10-12, 4-7).

“I thought our offensive efficiency has been good; it hasn't always come out with wins,” Brey said. “The last two we're scoring, we're confident and getting to the foul line. All three of them (Mooney, Gibbs and Pflueger) set the tone for us in a very important game."

Mooney, who passed the 1,000-plateau in the second half while scoring 18 of his points, finished 9-of-18 from the field, including a pair of 3-pointers. He also made 8 of 9 free throws after going 7-for-7 in Notre Dame's 90-80 victory over Wake Forest Wednesday.

“We're a confident group right now, especially in close games,” said Mooney, who now has 1,009 points in his career and 17 double-doubles this season to lead the nation. His 13.4 rebounds per game coming in was the second best.

“He's a beast,” Pflueger said of his teammate who was not on the recent John Wooden Player of the Year list. “He's all about team first."

Jose Alvarado had 25 points, Moses Wright 17 before fouling out and James Banks III 13 points and 10 rebounds for the Yellow Jackets, who were playing without leading scorer Michael Devoe (foot injury) and saw a two-game win streak snapped.

Notre Dame, which beat Georgia Tech 78-74 on Jan. 15, closed the first half on a 10-3 run in the final 3:14 to take a 36-33 lead. There were four lead changes, and the game was tied seven times in the first 20 minutes during which the Irish led by as many as five and trailed by as many as four.

Georgia Tech hit four of its first seven shots of the second half, with Alvarado scoring seven points to tie the game 44-44 with 15:38 to play. A Mooney 3-pointer, off an assist from Prentiss Hubb, with 11:43 to go pushed him past 1,000 points in his career for a 53-48 Irish lead.

George Tech called a timeout, but the 3-pointers kept falling for the Irish as Goodwin’s trey helped the Irish out to a 58-50 lead with 10:03 to play. The Irish lead was still eight, 61-53, with eight minutes remaining.

Georgia Tech: The Yellow Jackets, who were on a modest two-game winning streak following an 82-54 non-league victory over Morehouse, entered the contest 3-2 on the road in the ACC. But playing without Devoe (16.2 points per game) took away an offensive weapon that the Irish didn't have to worry about.

“You can't leave points off the board because (the Irish) will make you pay because of their offensive skill set,” Pastner said after calling Notre Dame perhaps the best offensive team in the ACC. “We did a great job with 20 offensive boards, a good job in the red zone (paint, 44-18). The bottom line is they hit some tough 2s and they made nine 3s. We didn't make enough 3s (4 for 18). Not having Mike Devoe hurts us because it takes away a shooter.”

Notre Dame: The Irish had lost five ACC games by five points or less before winning 90-80 over Wake Forest Wednesday night for their first league victory at home. Saturday's game was the middle of three straight at home. Brey likes the way his team is playing.

“Offensively I think we're feeling pretty good about ourselves,” Brey said. “I feel the last two games we've been harder to guard. If we can score 75 or 80 you're going to have a chance to win every game.”

Former All-American and NBA standout Kelly Tripucka, who played for Notre Dame's Digger Phelps from 1977-81 when the Irish went 92-26 and made their only Final Four appearance, was inducted into the Purcell Pavilion Ring of Honor at halftime. Tripucka, who scored 1,719 and averaged 15.3 points in his Irish career before averaging 17.2 points in the NBA, visited with the Irish Friday and had some words of advice for Mooney, who was making just 61% of his free throws coming into Saturday's game.

“I got on Mooney a little bit about his free throw shooting,” Tripucka said. “He's got too good of a touch. I asked him, ‘are you a good free-throw shooter?' He said no. I said, that's not going to cut it.”

Mooney made his first eight free throws before missing his ninth Saturday.

“It's about being confident with your touch,” Mooney said about his “lecture.” “Good for him.”