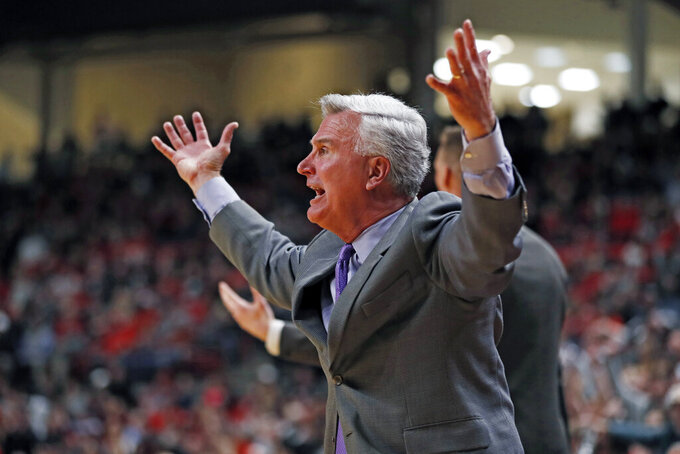 LUBBOCK, Texas (AP) — Davide Moretti flinched as a pass the Texas Tech guard wasn't expecting glanced off his back and bounced toward Kansas State's Cartier Diarra.

When Diarra tried to get too fancy with the ensuing breakaway dunk and clanged a windmill attempt off the rim, Moretti made the last-place Wildcats pay at the other end.

Moretti scored 18 points, including a 3-pointer after Diarra's ill-fated miss when he could have tied the score midway through the second half, and the Red Raiders beat the Wildcats 69-62 on Wednesday night.

“There’s a lot of plays in the game that were momentum killers,” Kansas State coach Bruce Weber said. "Moretti ... he’s the closer. That dude always comes up with big shots.

“And he’s such a good teammate. He lets those other guys go, but when it comes time to close, that dude is there and makes the right plays.”

Freshman Jahmi'us Ramsey had 17 points to help the Red Raiders (17-9, 8-5 Big 12) keep sole possession of third place in the conference, a game ahead of No. 17 West Virginia.

Kyler Edwards scored 14 points as Texas Tech bounced back from a loss to Oklahoma State that ended a three-game winning streak and knocked them out of the Top 25 after just one week back in the poll.

“I think we understood what was at stake,” Texas Tech coach Chris Beard said. “Didn’t play our best game but I thought when it mattered most we kind of dug in and we had some separation.”

Xavier Sneed had 15 points for the Wildcats (9-17, 2-11), whose six-game losing streak is their longest since 2005, a season after tying Texas Tech for the Big 12 regular-season championship. Sneed left late in the game with cramps.

“I thought that was one of X's best games of the year overall,” Weber said. “He played to exhaustion.”

Moretti finished 4 of 10 from long range and tied Edwards and Ramsey for the team lead with four assists. Edwards, who had a career-high 24 points in a win at Kansas State in January, was 5 of 9 from the field.

Moretti's 3 for a 47-42 lead after Diarra's missed dunk came not long after he had both of his steals in the game.

“It was a big-time moment,” the junior from Italy said. “I thought that was the crucial moment of the game, and I think we responded pretty good after that play.”

Before Ciarra's ill-advised play, the junior guard and Weber had a heated exchange going into a timeout. Ciarra clapped emphatically toward Weber after shouting at him, and Weber slammed a stool onto the court.

Ciarra went back in the game but was benched almost immediately after the missed dunk and didn't return. Weber downplayed the exchange after the game.

“Great passion, great energy on the bench, trying to play hard, trying to get them to play at a high level,” Weber said.

Kansas State: Diarra's missed dunk came right after his nifty reverse layup had pulled the Wildcats within two. It was a symbolic moment for a team virtually assured of a losing record after three straight 20-win seasons under Weber. Kansas State is headed for its worst record in 20 years.

Texas Tech: The Red Raiders have been difficult to figure out coming off the best season in school history, which ended with a loss to Virginia in overtime in the national championship game. They'll be favored in the next three games before finishing the regular season against the Big 12's two best teams: top-ranked Baylor on the road and No. 3 Kansas at home.

Antonio Gordon hit a pair of 3s just 10 seconds apart as the Wildcats trimmed a 13-point deficit with 1:37 remaining to five with 38 seconds to go. But Kansas State couldn't get any closer. Gordon had 14 points and a game-high eight rebounds.