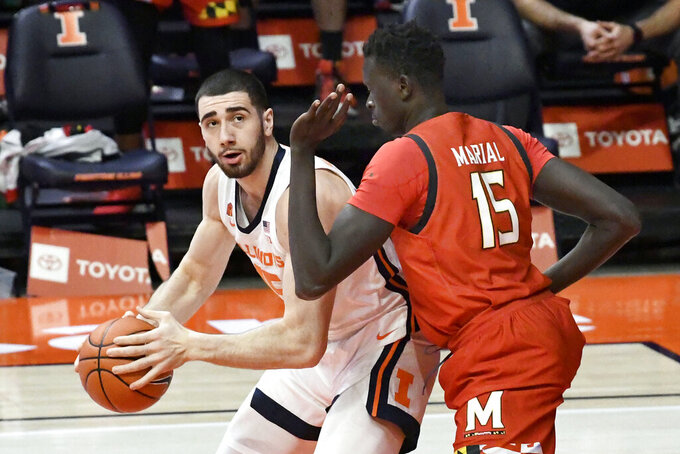 Illinois forward Giorgi Bezhanishvili (15) looks to pass as he is pressured by Maryland center Chol Marial (15) in the first half of an NCAA college basketball game, Sunday, Jan. 10, 2021, in Champaign, Ill. (AP Photo/Holly Hart)

The game was fast-paced and close throughout. Hakim Hart hit a 3-pointer with 4:08 left to give the Terrapins a 62-61 lead, which Maryland didn’t relinquish.

“They’re a great basketball team, a team I think could a Final Four team,” Maryland coach Mark Turgeon said of Illinois. “This league ... I’ve never seen anything like it. It’s absolutely relentless.”

Ayo Dosunmu scored 23 points for Illinois (9-4, 5-2 Big Ten) and Kofi Cockburn added 21 points and 10 rebounds. Dosunmu missed a long 3-pointer at the buzzer that would have tied it.

“I thought it was going in,” Dosunmu said. “Honestly, it felt good but it hit the back of the rim.”

Maryland played without point guard Eric Ayala (14 points per game) due to a groin injury.

Illinois jumped to a 14-7 lead, fueled by five quick points for Dosunmu, six by Cockburn and a long 3-pointer by Adam Miller. Maryland stuck around and tied it at 16 midway through the first half.

Illinois guard Trent Frazier took a blow to his left shoulder late in the first half and left in obvious pain. He returned in the second half but was held scoreless.

Cockburn had 16 points at the break.

Scott buried a 3 at the buzzer to pull the Terrapins within 34-32 at the half.

“It was frustrating,” Illinois coach Brad Underwood said. “We didn’t get the ball to Kofi enough in the second half. I have to give Maryland all the credit. They were physically tough, they smacked us and hit us.”

Underwood was clearly upset at his team’s less-than stellar shooting, Illinois shot 41% on 25 of 61 shots.

“We were sloppy and not sharp,” Underwood said. “I’ll take the blame on this one. We were just as bad in practice the last two days as we were in the game.”

Coming off a 89-67 loss to No. 5 Iowa, Turgeon was thrilled at his team’s effort on the road against another ranked team.

“We had a really tough film session after the Iowa game. The players responded,” Turgeon said. “They believed they were going to win. We changed a lot of things in our philosophy, and I think it helped us. We had a lot of guys who were unbelievably courageous tonight, played with great guts, had to play a lot of minutes.”

Morsell attributed the win to confidence. “It was big for sure. You know how hard it is to get wins in the Big 10, especially on the road. We locked in, did what we had to do, got it done. We believed. Believing is the biggest thing.

“Even though we lost to Iowa the other day, we try to focus on the next game, get better."

Expect Illinois to drop in the rankings but remain in the Top 25.

Illinois: Travels to Nebraska on Wednesday.