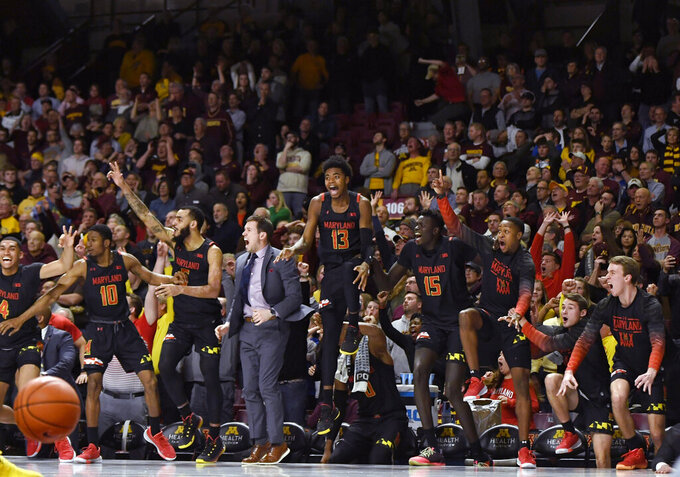 Maryland players on the bench celebrate the go-ahead 3-pointer by Darryl Morsell, not seen, against Minnesota during the second half of an NCAA college basketball game Wednesday, Feb. 26, 2020, in Minneapolis. Maryland won 74-73. (AP Photo/Hannah Foslien) 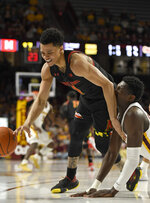 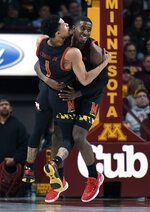 MINNEAPOLIS (AP) — Down by double digits for most of the game and trailing by eight points near the two-minute mark, Maryland could've chalked up an off night at Minnesota to the rigor of Big Ten road play and still returned home in first place.

Darryl Morsell and his teammates refused to concede.

Morsell drained the go-ahead 3-pointer with 1.9 seconds left for No. 9 Maryland on Wednesday night, capping a furious comeback for a 74-73 victory with a 10-1 run over the final 2:06.

“Foul troubles, everything, I didn't know if we were ever going to get over the hump,” coach Mark Turgeon said. “But we've got a team of fighters.”

Jalen Smith had 16 points and 12 rebounds, including a soaring rebound and slam with 14.5 seconds remaining that pulled the Terrapins within 73-71. Gabe Kalscheur short-armed the front end of a one-and-one free throw with 12 seconds to go for the Gophers, who missed three foul shots in the final 39 seconds. Then the Terrapins hustled the ball up to find Morsell, who had 13 points and nine rebounds, for the winner from NBA range from the top of the key.

“When it left my hand, honestly, I thought it was going to hit off the backboard and go in," Morsell said. "It looked good. I knew I wasn't going to miss short.”

Aaron Wiggins scored 16 points and Anthony Cowan Jr. had 10 points, nine assists and six rebounds for Maryland (23-5, 13-4), which maintained a two-game lead for first place in the Big Ten with three games to go. This was the the third comeback victory from 15-plus points by the Terrapins this season, and the 17-point deficit overcome marked their largest of the last 10 years, according to ESPN research.

“This game already told us what we knew about each other. Everybody's tough,” Smith said. “We play with a lot of grit. Even if we're down, we're always going to fight back.”

Daniel Oturu had 28 points and 11 rebounds and Marcus Carr added 19 points and seven assists for Minnesota (13-14, 7-10), which saw its NCAA Tournament hope all but disappear with a third straight excruciating home defeat.

“Different levels of devastation. It's been very, very difficult. We could have won all three of them. So I feel for our guys. They're playing hard," said coach Richard Pitino, who declined to make players available to reporters. "I've just got to get them back and get them positive again.”

The Terrapins missed seven of eight shots in the closing stretch, until Smith's dunk. Missing 12 of their first 13 tries from 3-point range, they trailed by as many as 17 points in the first half and still by 16 points with 15:55 to go on Kalscheur's 3-pointer that made it 54-38.

The Gophers, who faltered late in their last two home contests against Iowa and Indiana by, let another opponent climb back in the game with a shooting dropoff and some unforced turnovers. Wiggins intercepted a cross-court pass by Carr and went the other way for a one-handed slam, bringing Maryland within 66-62. That was the closest the Terrapins had been since 6-4.

Oturu made two free throws to push the lead back to 72-64 with 2:06 left, but Wiggins answered with a 3-pointer. Kalscheur fouled Cowan, who made two foul shots to bring Maryland within 72-69 with 45 seconds to go, and a backcourt turnover by Minnesota under heavy pressure gave the Terrapins the chance to tie.

Smith's 3-pointer clanged off the rim, and Kalscheur grabbed the rebound. He made one of two free throws and blocked Cowan's shot on the other end with 29 seconds left, seemingly putting the Gophers in safe mode.

Entering the game with the worst field-goal percentage in Big Ten play — and second-worst from 3-point range — the Gophers made six of their first seven shots from behind the arc. Isaiah Ihnen, a lanky freshman from Germany who has worked his way into significant playing time lately, made his first three 3-point attempts. The last one put Minnesota up 21-8. He missed his next four.

Carr found Jarvis Omersa on a fast break for an alley-oop that ignited the crowd, gave Minnesota a 23-12 lead and put Carr in a tie with Arrriel McDonald (1993-94) for the program's all-time single-season assist mark. Carr made the record his own a little later, with 182.

The Terrapins, meanwhile, were out of sorts. Turgeon was whistled for a technical less than four minutes in for arguing Smith's second foul. Cowan was teed up, too, after he made a layup, crash-landed against the stanchion under the basket and kicked in frustration at a cameraman after his feet were tangled in the cord.

Cowan, the senior point guard, started his 127th consecutive game to set the all-time program record. He passed Keith Booth, who played from 1993-97.

Maryland: Cowan had his second consecutive quiet game, going just 2 for 15 from the floor to fall to 3 for 19 over his last two contests. Wiggins came through again off the bench. He had 20 points on 7-for-15 shooting at Ohio State on Sunday.

Minnesota: After being outscored 11-0 over the final 5 1/2 minutes in a 58-55 loss to Iowa, blowing a 10-point first-half lead in a 68-56 loss to Indiana and now this, the Gophers have not only spoiled their season but put the future of Pitino in question. They've made the NCAA Tournament twice in his first six seasons.

“I’m very very confident in what we’re doing here. I think our guys are really good kids and getting better," Pitino said. "We can’t worry about that. We’ve got to move on to the next one.”

Maryland: Hosts No. 24 Michigan State on Saturday night. Maryland is 15-0 at home. The last time the team went undefeated at home was the 2001-02 season, when the Terps won the national championship.