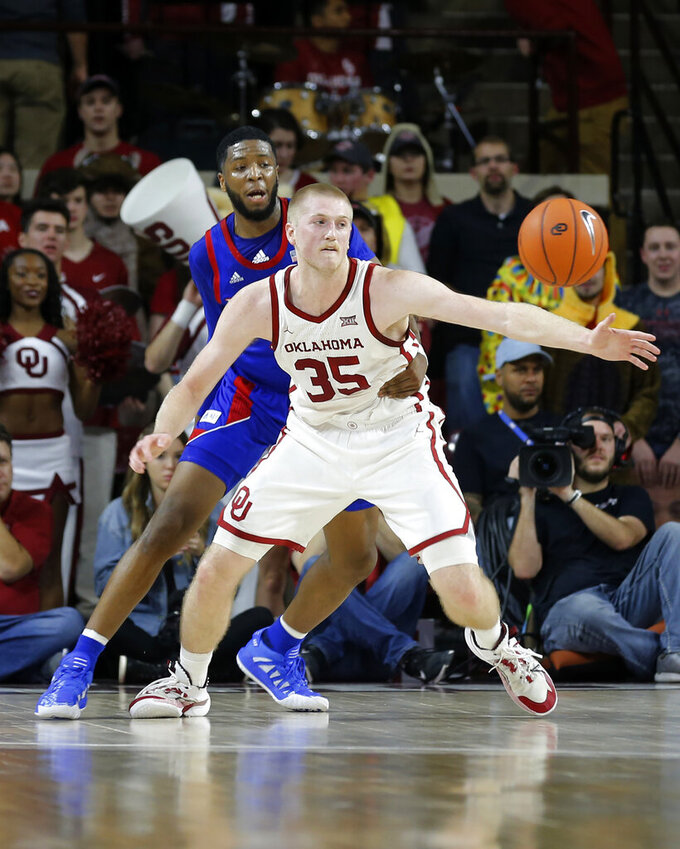 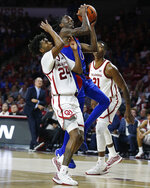 The graduate transfer scored 20 points in his first start for Kansas and helped the sixth-ranked Jayhawks beat Oklahoma 66-52 on Tuesday night.

Moss stepped in for leading scorer Devon Dotson, who sat out with a hip injury, and made 6 of 11 3-pointers. Moss was well prepared to move into the starting five — he had started every game he played in the previous two seasons at Iowa.

“We learned in shootaround that Devon wasn’t going to play," Moss said. "Devon is a big part of our offense. So we knew that all the guards would have to step up. We did that tonight. I felt like I got some momentum going hitting some early shots and just felt comfortable tonight.”

Udoka Azubuike had 16 points and 14 rebounds and Marcus Garrett added 15 points for the Jayhawks (13-3, 3-1 Big 12), who bounced back from a loss to Baylor last Saturday.

It wasn't pretty, but Kansas coach Bill Self was fine with that. His Jayhawks overcame a sluggish first half to shoot 50% from the field after the break.

“We scored 66 points and it felt like we were on fire tonight," Self said. “That’s how hard it is to score in this league. It could be a first one to 60 and I know that’s not very exciting to everyone. That is the type of grind-out game that the NCAA Tournament games typically are.”

“I thought we did a great job defending OU’s scorers on the perimeter,” Self said. “That was probably the biggest thing for us.”

Oklahoma struggled to deal with Azubuike, a 7-foot, 255-pound center.

“We knew we had a mismatch with them inside," Azubuike said. “They have a bunch of guys who like to shoot the ball. So we had to move our feet and get out on them. Our bigs are what make us go.”

The Sooners had won home games against the Jayhawks the previous two years, and it looked like they might get another one. Kansas led 28-27 at the break after a back-and-forth first half.

Kansas controlled the early part of the second half, but a 3-pointer by Doolittle cut Kansas' lead to 49-45. Garrett answered with a 3-pointer, and then Azubuike dunked to put Kansas in control for good.

Oklahoma coach Lon Kruger and the Sooners couldn't find any answers in their second straight loss.

“There are no shortcuts to making the improvements we need to make," he said. “I like a lot of the looks we had, but we obviously need even better looks. I thought we went through a stretch in the second half where they simply rebounded the ball better than us. We were looking, searching through a list of things.”

Kansas: The Jayhawks were solid without their scoring leader. Dotson averages 18 points per game, but the No. 2 scorer heading into the game was Azubuike with 12.6.

Oklahoma: The Sooners became too dependent on the 3-point shot, taking nearly half their shots from beyond the arc. They couldn't find scoring elsewhere when outside shots weren't falling, going 11 for 33 inside the 3-point line. Oklahoma could have used a win against a highly ranked team.

Top Daug returned as an Oklahoma mascot on Tuesday after being retired for 15 years. The mascot is most associated with Oklahoma’s run of success under coach Billy Tubbs starting in the mid-1980s. Top Daug was retired in 2004 and was brought back once, for a men’s game in 2008 as a part of a 1988 Final Four reunion.

Oklahoma had just five turnovers, and no Sooner player had more than one.