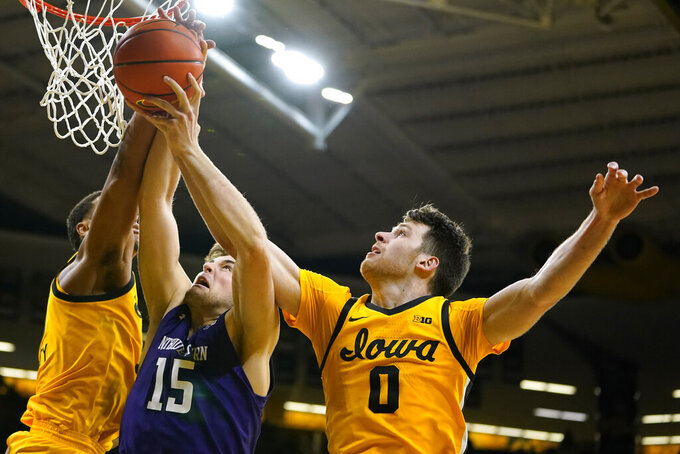 Bohannon, the Big Ten's all-time leader in 3-pointers and the Hawkeyes' career leader in assists, has played six seasons at Iowa and has already gone through a couple of Senior Nights.

This was, for sure, his last one, and the emotions hit him as he left the court for the final time in the No. 24 Hawkeyes' 82-61 win over Northwestern on Monday.

Bohannon, who came out of the game with three minutes to play, kneeled down and kissed the center-court Iowa logo.

“I really wasn't that emotional before the game,” he said. “After the game, man, everything hit me. I kind of had flashes of all of the memories I had here. It all kind of flowed together at that point.”

Bohannon scored 18 points, sophomore Keegan Murray had 26 points and 18 rebounds, and the Hawkeyes (21-8, 11-7 Big Ten) won for the seventh time in their last eight games.

“A lot of people were saying to me that I had a great career,” Bohannon said. “I was like, ‘There’s still a lot left here.' We have a lot of games to be played, a lot of memories still to be made. I came back to try to get this team to places no one thought we could be.”

Bohannon has hit big shots throughout his career, and Northwestern coach Chris Collins has seen a few of them.

“I don't even know how many years Bohannon has played,” Collins joked. “It's been a lot of them.”

Bohannon said this game was a perfect script for the end, and Iowa coach Fran McCaffery agreed.

“Every Senior Night, you want it to go well,” McCaffery said. “And it doesn't always go well. But you want your guys to play well. You want everyone to be happy.”

Murray had his eighth double-double of the season. He came into the game ranked fourth nationally in scoring at 23.2 points per game.

“Keegan is really special,” Collins said. “I don't know what kind of player you put on him.”

Murray nearly outscored Northwestern (13-15, 6-13) in the first half. He had 13 points, while the Wildcats scored just 17 on 22% shooting. Northwestern missed 14 of its first 17 shots while posting its lowest first-half point total of the season.

Collins said “a flu bug” had been going through his team, and that affected the Wildcats.

“We played like a very tired team tonight,” he said. “Our energy wasn't there, and that's not a good recipe for playing Iowa.”

Connor McCaffery, another senior, had a season-high 17 points for the Hawkeyes.

Northwestern guard Boo Buie was one of the players especially affected by illness.

Buie, who averages 14.7 points, played just six minutes in the first half, eventually heading to the locker room. He did not score.

“I admire that he went out there and tried,” Collins said.

A MOMENT FOR A MANAGER

Iowa senior manager Jack Devlin got to take a half-court shot during the final media timeout. Devlin missed the first, but made the second and was immediately mobbed by his teammates.

Devlin is part of the university's REACH (Realizing Educational and Career Hopes) program for students ages 18 to 25 years old with intellectual, cognitive, and learning disabilities. He has been a manager with the Hawkeyes since 2018.

“I knew as soon as that thing went in, the players were going to go nuts,” Fran McCaffery said. “It's just a great feeling for all of us, for someone so special to us.”

Iowa forward Patrick McCaffery did not play because of a hip injury.

McCaffery has started 26 games this season and is tied for second on the team in scoring at 10.7 points per game. He is fourth on the team with 99 rebounds.

Iowa has won seven straight and nine of 10 against the Wildcats. The Hawkeyes lead the series 122-60.

Iowa moved into sole possession of fifth place in the Big Ten, a half-game behind Ohio State heading into the final two games of the regular season. The Hawkeyes also clinched a winning record in conference play.

Northwestern lost for the fifth time in its last six games.

The Hawkeyes moved up one spot in the AP poll earlier in the day, and have a chance to keep climbing with road games this week against Michigan and Illinois.

Iowa: At Michigan on Thursday.