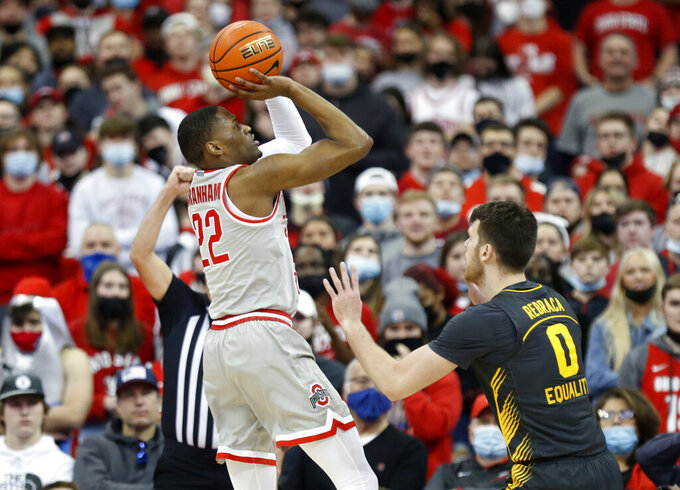 “I don’t think the strategy was all that complicated,” Iowa coach Fran McCaffery said. “We made them take tough shots and of course we rebounded. Our rebounding numbers were a big part.”

Murray scored 20 points in the first half. He didn’t make his first basket of the second half until there was 7:07 remaining.

“I think the thing that’s impressive about him is he does it in a variety of ways,” McCaffery said. “He just plays the game with a tremendous amount of confidence, which really is impactful to his teammates.”

Malaki Branham led Ohio State with 22 points and E.J. Liddell added 15. The Buckeyes were just 2 of 11 from 3-point range.

While Keegan Murray paced the Iowa offense in the first half, his brother Kris Murray did so in the second half.

Kris Murray led Iowa with 11 points in the second half, shooting 50% from the field in that span.

Iowa reached at least 40 rebounds for the third time in six games. It trailed 21-10 midway through the first half but pulled away with a 39-38 halftime lead thanks to six offensive rebounds in the final 2:31.

The Hawkeyes held Ohio State to just three field goals over the final 13:16, grabbing 12 boards to the Buckeyes’ six to maintain the edge on the glass.

“It’s something we talked about a lot. We always want to get downhill,” McCaffery said. “If we miss, we got to get the weak side rebounds and we did that.”

Iowa: The Hawkeyes grabbed 20 offensive rebounds and capitalized with 18 second-chance points. Iowa outrebounded Ohio State 40-31 to help it bounce back from a loss to Michigan on Thursday.

Ohio State: The Buckeyes lost their first game at home this season. They became the final team in the Big Ten to lose on their home floor after getting off to their best start at home since the 2014-15 season.

“We’ll live to fight another day,” Holtmann said. “We’ve got a really difficult stretch coming up. Hopefully we can coach and play better the next time out. That’s our challenge.”