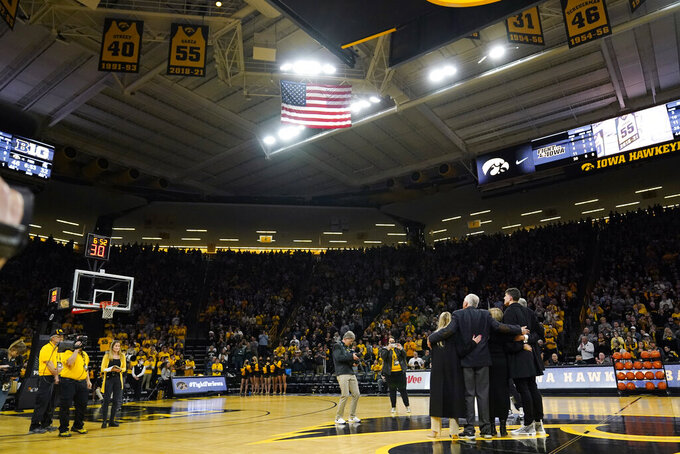 IOWA CITY, Iowa (AP) — The present made sure to acknowledge the past.

So, when Murray scored on a layup while being fouled, he made sure to look over to Garza and give a subtle flex of the muscles the way Garza did.

“I kind of wanted to resemble him a little bit,” Murray said, smiling.

Keegan Murray had another big performance, scoring 28 points as the 25th-ranked Hawkeyes defeated the struggling Spartans 86-60.

Murray, who entered fourth nationally in scoring at 23.4 points per game, was 10 of 15 from the field. It was his 19th game of 20 or more points this season.

“He was unbelievable,” Michigan State coach Tom Izzo said. “He was as good as anybody I've seen in this league in a while.”

Iowa opened the game by making six of its first seven shots. The Hawkeyes led by 15 points in the first half and went into halftime up 46-32, then extended it to 32 in the second half. The Spartans only led for the first 21 seconds.

“We knew the fight we were going into,” Keegan Murray said. “We wanted to be the more physical team. I felt like we did that.”

Iowa outrebounded the Spartans 44-43 and held them to 29.7% shooting in the second half.

“When you play Michigan State, it's not easy to outrebound them," Iowa coach Fran McCaffery said. “You've got to match their intensity, their physicality. And we did that.”

Kris Murray and Jordan Bohannon each had 11 points as the Hawkeyes continued their February run. Iowa lost three of its last four games to end January, but is 5-1 since.

“I think it's been our physicality,” Kris Murray said. “We've been the more physical team. Our intensity the last couple of games has been really good. We've thrown the first punch each time.”

The Hawkeyes missed nine of their first 10 shots in the second half, but maintained their double-digit lead by making their first seven free throws. Bohannon then hit back-to-back 3-pointers and Iowa led 61-44 with 12:57 to play.

“Keegan is a special talent, and he does it in a special way,” Izzo said. “They've got a star. He is a star.”

Garza had his No. 55 jersey retired in a halftime ceremony.

“That number, obviously, means a lot to me and my family,” Garza said before the ceremony. “I put everything I had into that jersey for four years. To see that go up in the rafters is something I’ll never forget.”

The jerseys of former Hawkeyes Murray Wier, Roy Marble and Chuck Darling were retired during a pregame ceremony.

Izzo said the Spartans' current struggles could lead to some lineup changes.

“Sure, there's always a concern with mental toughness,” Izzo said. “There will be some things that change.”

What those changes will be, though, Izzo wouldn't say.

“No insult, but it's none of your business until you see it,” he said.

The Hawkeyes moved into a sixth-place tie with the Spartans in the Big Ten. This was the only meeting between the teams during the regular season.

The Hawkeyes, who were one point ahead of the Spartans in this week’s poll, made a good case to stay in the rankings.

Michigan State fell out of the poll this week after getting as high as No. 10 in the rankings in 12 appearances this season.

Iowa: At Nebraska on Friday.