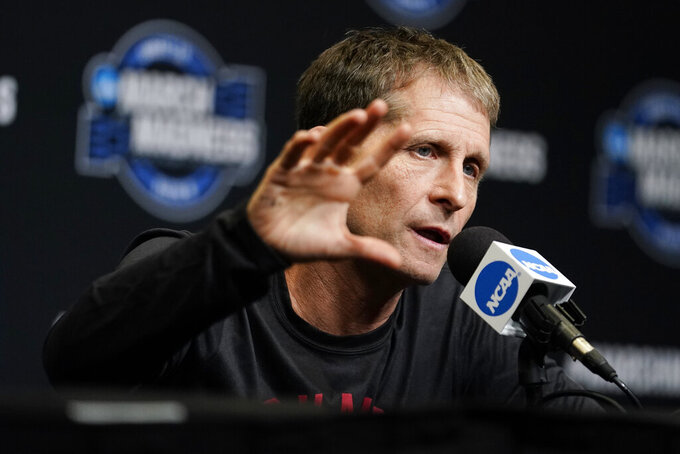 Across the country now, the Razorbacks ventured out Wednesday to see the iconic sights of San Francisco — a cable car ride on the agenda, of course.

“It also helps me from overloading them," Musselman acknowledged between Sweet 16 preparations. "If we’re touring the city, it’s one less film session, one less putting pressure on the guys, and so I think it’s healthy for us to be able to do stuff like that.”

There were nights at Nevada several years back when Musselman came home stewing about a 10-point win, wishing it were more. He learned from that and no longer allows himself to be so narrowly focused but rather determined to cherish the triumphs and unique opportunities for bonding and growth wherever his team travels.

Fourth-seeded Arkansas (28-8) took the court Thursday and beat top-seeded No. 1 Gonzaga 74-68 in the Sweet 16 to reach its second straight Elite Eight.

This is fun, familiar territory for the 57-year-old Musselman, a former Golden State Warriors and Sacramento Kings coach. His players had the option to sightsee or rest.

That's why Musselman cherishes the chance for his players to learn about a new place and its history, considering it equally important as game preparation. A couple of hours fewer in the film room, that's just fine.

He still tells twins Caleb and Cody Martin, who played for him at Nevada, how they should have enjoyed themselves more then. Musselman's wife, Danyelle, reminds him of how miserable he used to be even after victories and how that's no way to live.

“Through experience at Nevada, I thought I put way too much pressure on our team the last year,” Musselman recalled. “I look back at it, I regret it. We didn’t celebrate wins. We were ranked in the top 10 for 17 straight weeks. We got to the NCAA Tournament and played Florida, and I thought that was one of the most regrettable years I’ve ever had. ... I wish we would have had more fun. I wish we would have embraced being in the tournament.

“This team has had an incredible year, so we are going to celebrate.”

So for the trip West, Musselman handed out hats representing the various professional teams here — the Warriors, for whom former Razorbacks guard Moses Moody is a rookie first-rounder, along with the 49ers, Giants and Athletics.

Another added bonus of his return to the Bay Area: Musselman's mother, Kris, traveled up from San Diego and will see her son coach Arkansas in person for the first time.

“It will be awesome to be able to coach in front of her,” he said. “That’s a really cool personal thing, although it’s way more about the players and student-athletes and their experience playing in the Sweet 16.”

And everything that comes with it off the floor, too.