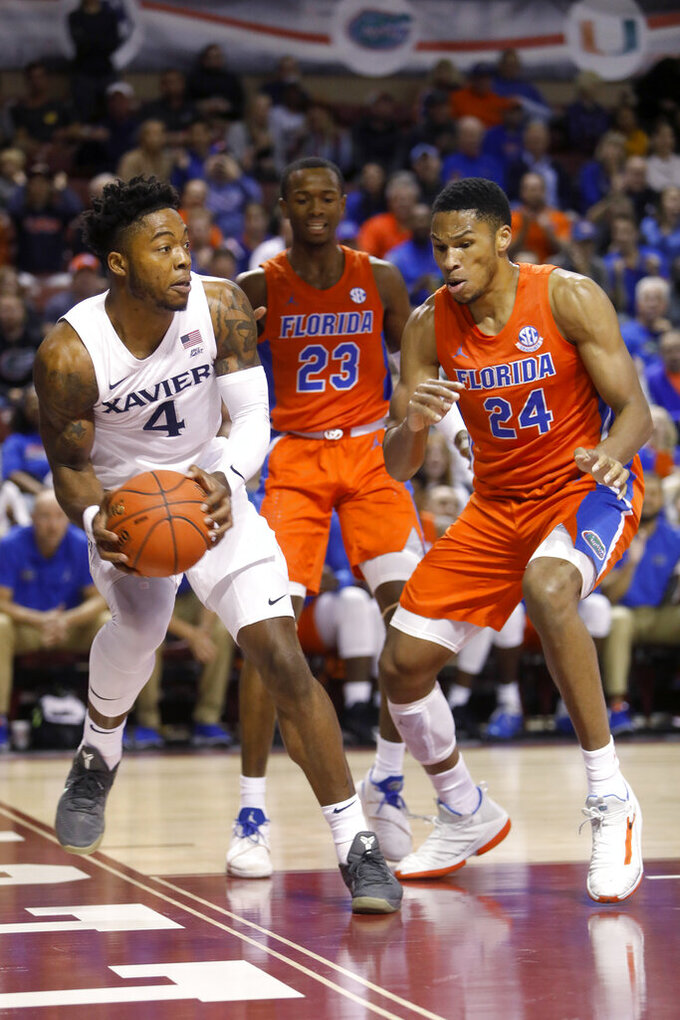 Xavier's Tyrique Jones, at left, looks for a pass against the defense of Florida's Scottie Lewis (23) and Kerry Blackshear Jr., in the first half of an NCAA college basketball game during the finals of the Charleston Classic, Sunday, Nov. 24, 2019, in Charleston, S.C. (AP Photo/Mic Smith) 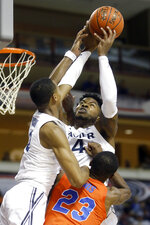 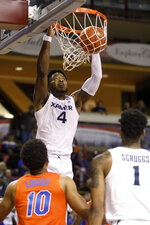 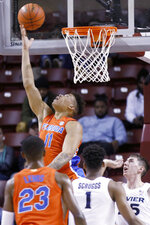 CHARLESTON, S.C. (AP) — Florida’s finally happy to gain attention for who it beat than the teams it’s lost to this season.

Keyontae Johnson and Andrew Nembhard had 15 points each and Florida held off No. 18 Xavier 70-65 in the Charleston Classic championship Sunday night.

“It’s amazing,” Gators coach Mike White said, “to think where we were a week ago and where we are now.”

Last week, Florida was still in the national rankings and suffering its second loss in four games at UConn — it lost to Florida State on Nov. 10 — that led to questions about the team’s apparent free fall from preseason expectations where it started No. 6 in the country.

Johnson, named the tournament MVP, said the players didn’t get down or despondent about the defeats, just focused on turning things around.

“We just came to practice, worked on our roles and getting better from then until now,” he said.

That was apparent in three games here. The Gators needed to hold off a late rally by Saint Joseph’s for a 66-62 victory Thursday in the tournament opener before a second-half surge led to a 20-point win over state rival Miami to send them to the title game.

Florida led by 10 points by halftime and stretched it to 17 points in a run where Nembhard had back-to-back 3s and Noah Locke followed with another from beyond the arc.

But just as Xavier did against UConn for a double-overtime victory Friday night, the Musketeers caught fire. They clawed within 68-65 on Quentin Goodin’s 3-pointer with 1:08 left and had a shot to tie on Paul Scruggs’ clean look from three with 13 seconds to go. But the ball bounced twice on the rim and fell off where Kerry Blackshear Jr. grabbed it for the Gators, got fouled and made both free throws for the final margin.

“I’m glad that buzzer sounded,” White said. “I don’t know if we would’ve survived the OT.”

Florida players jumped around when the game ended and the large group of fans chanted and did the Gator chomp, glad to finally have something to cheer about.

Xavier struggled to make the outside shots it had hit consistently this season, going just 5 of 16 from beyond the arc against the Gators. And as the Musketeers’ shots kept missing, Florida kept swarming as it forced 16 turnovers, Xavier’s second-highest number of miscues in a game this fall.

Blackshear finished with 14 points and 10 rebounds, his second double-double of the tournament. Locke

For Blackshear, the Virginia Tech grad transfer, it was the second straight season he celebrated a tournament title in Charleston after the Hokies captured the event last in 2018.

Scruggs led all scorers with 24 points while Tyrique Jones had 13.

Xavier coach Travis Steele acknowledged the team’s effort at coming back. He was more focused on the first 25 minutes where his normally steady team struggled to catch up to Florida’s players on defense.

“That’s just inexcusable. That’s not who we are,” he said. “We can’t be that way moving forward.”

Florida: The Gators look ready to re-enter the national college basketball conversation. They used a dominant second half in Friday’s semifinal to defeat state rival Miami 78-58 and proved their mettle against Xavier.

Xavier: The Musketeers and deep, gritty and talented. Their double-overtime win against UConn here Friday night showed all the characteristics that should carry it a long way in the Big East and beyond.

Mike White said he never discussed Florida’s high expectations with his players during the offseason. He decided Tuesday to talk about what had gone wrong early and how things needed to improve. Florida’s players took it to heart in three games in Charleston, White said.

The Musketeers have made a habit of getting out of tight jams this season. They needed overtime to defeat Missouri before hold off Missouri State by three points. It took double OT for a 75-74 win over UConn that got them to the championship game. Florida’s Nembhard stayed up watching the whole contest, which ended near 1 a.m. “I was more nervous there and was about this,” he said, smiling.