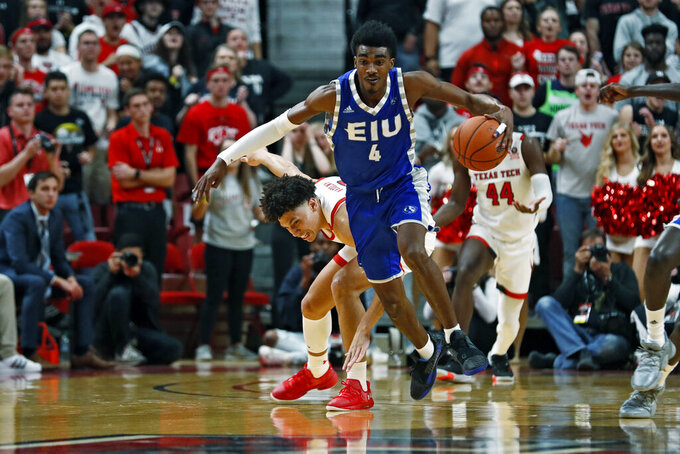 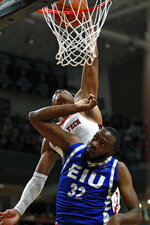 LUBBOCK, Texas (AP) — Another graduate transfer and some freshmen helped get No. 13 Texas Tech off to a solid start in the new season, seven months after the Red Raiders played in the national championship game.

"Everyone's playing together in our offense so that helped me score," Holyfield said. "The way we work all together ... on offense is easy for us to get easy basket sometimes."

Davide Moretti, the only returning starter from last season's team that lost in overtime to Virginia in the title game, had 13 points. Terrence Shannon Jr, another freshman, had 11 points.

"I was impressed with the guys' preparation this week. Dialed in ... to have the emotion there at the start of the game, great crowd," coach Chris Beard said. "First Division I game for a lot of guys, then put on top of that the two banners and the videos and all of this and it's hard to do. But I thought there was a calmness to us early. It was really impressive."

George Dixon had 15 points and 10 rebounds to lead Eastern Illinois, a team from the Ohio Valley Conference that was 14-18 last season.

Texas Tech led throughout, jumping out to a 9-2 run in the first 3 minutes before a sold out crowd. It was 46-31 at halftime on way to Tech's 48th consecutive non-conference home victory.

The Red Raiders claimed a share of the Big 12 title last season and won 31 games before that loss to Virginia. Four of their top five scorers from that squad are gone, including 2018-19 grad transfers Matt Mooney and Tariq Owens, along with hometown guard and Big 12 player of the year Jarrett Culver leaving after only two seasons for early entry into the NBA draft.

Holyfield, a 6-foot-8 forward, played against the Red Raiders in the first round of the tournament in Dallas two years ago. He redshirted last year at Stephen F. Austin because of injuries.

Ramsey, coming off a Class 6A state title at Dallas-area power Duncanville last season, is among seven freshmen.

"Pressure's a blessing. Pressure is why you play at this level. It's why you coach at this level and why you support a team at this level," Beard said. "I think these freshmen understand they have an opportunity. There's no pressure on this team. Three returners, 10 new players. We're a work in progress. We have our own expectations internally that's so much more than what anybody could put on us. I just keep talking to these guys about opportunity versus pressure and I thought they did a good job tonight embracing it."

Eastern Illinois: The challenge was tough for the Panthers but the sometimes slim margin showed how they're among the oldest teams in the NCAA.

Beard said freshman forward Tyreek Smith will miss at least a couple of weeks with an injury he suffered in practice. Smith played at Trinity Christian in Louisiana, where he averaged 17.9 points, 12.3 rebounds and three blocks as a senior.

Beard promised a Texas Tech couple that he would attend their upcoming summer wedding if the students showed up for the season opener. He quickly lost the bet as the student attendance accounted for 4,866 of the sellout crowd of 15,098.

Eastern Illinois is on the road to play another major college team, Friday night at Wisconsin.

Texas Tech, which plays four of its first five games at its home arena, is there Saturday to play Bethune-Cookman.