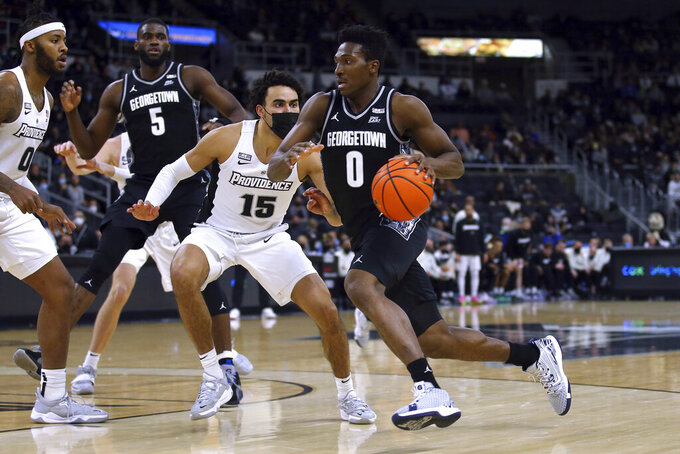 Georgetown's Aminu Mohammed (0) drives to the basket as Providence's Justin Minaya (15) defends during the second half of an NCAA college basketball game Thursday, Jan. 20, 2022, in Providence, R.I. (AP Photo/Stew Milne)

Aminu Mohammed is one of the Big East's top individual talents. He just so happens to play for the team at the bottom of the conference.

No matter. Mohammed has put himself on track to be selected in the NBA draft if he decides to be a one-and-done. The versatile Mohammad appears in several mock drafts based on the combination of his current productivity at Georgetown and his high ceiling.

The 6-foot-5, 210-pound guard leads the Big East with six double-doubles after being named the conference's preseason freshman of the year.

Mohammed moved to the United States from Nigeria when he was 14. His hometown is Temple Hills, Maryland, but he prepped at Greenwood Laboratory School in Springfield, Missouri. He was the state's two-time Gatorade Player of the Year and, according to the 247 Sports composite rankings, a five-star recruit and the No. 24 player nationally last year.

Mohammed fits the description of a “power guard,” a player who's comfortable working in the post or shooting from the perimeter and has the ability to defend guards or forwards.

His breakout came in December in the Hoyas' 79-75 win over traditional rival Syracuse. Mohammed put his full game on display with 23 points, 13 rebounds, five assists and two blocks.

“Hey, look, Aminu Mohammed, forget freshman of the year. He's MVP of the Big East, in my opinion," Georgetown coach Patrick Ewing said moments after the game. "He is only going to get better. He's a hard worker, he's respectful, he works hard and he's the first one there (in the gym) and last one to leave.”

The win over Syracuse came 10 days before a COVID-19 outbreak in the Georgetown program caused four games to be called off, and the Hoyas are on a seven-game losing streak.

Mohammed continues to intrigue scouts because of his strength, toughness and raw ability. He's been a consistent scorer because of his ability to get to the rim, and he's a relentless rebounder and defender.

JULIAN CHAMPAGNIE, ST. JOHN'S: The 6-8, 215-pound junior forward, who joins Mohammed as one of the few Big East draft prospects this year, is having trouble getting his shot to fall lately. He's a combined 12 for 45 (27%) in his last three games.

G JUSTIN MOORE, VILLANOVA: The 6-4, 210-pound junior guard has nine straight games with at least 13 points and has only been held under double figures in three games. He matched his season high with four 3s against DePaul on Tuesday.