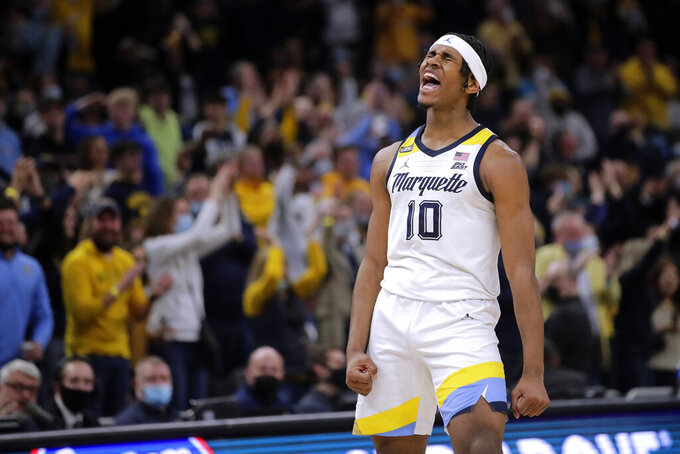 Marquette's Justin Lewis reacts during the second half of the team's NCAA college basketball game against Villanova on Wednesday, Feb. 2, 2022, in Milwaukee. (AP Photo/Aaron Gash) 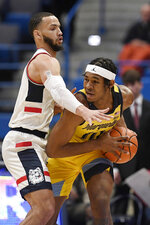 Marquette's surprise rise in the Big East coincides with the ascent of Justin Lewis.

The redshirt freshman has more than doubled his scoring average from last season and ranks among the Big East leaders in several statistical categories. He has gone from under the radar to potential NBA draft pick if he decides to turn pro this year.

“Justin Lewis is a guy that really intrigues me,” Field of 68 Media Network founder Rob Dauster said. “He’s a strong, physical, 6-foot-7 wing that has a 7-foot-2 wingspan and has really flourished playing in Shaka Smart’s open style this season. He’s got all the hallmarks of being a guy that can follow in the mold of Marquette legends like Jae Crowder or Wesley Matthews.”

Marquette, picked ninth in the 11-team Big East in the preseason, sits fourth in the standings and, at No. 18, has its highest AP Top 25 ranking in two years. Lewis led the Golden Eagles to a two-game season sweep of conference power Villanova and to wins in eight of its last 10 games.

“I've evolved a lot,” Lewis said on the Big East Digital Network’s Shootaround. “I would say last year was a learning lesson. I learned a lot from older guys in front of me. ... I trust my work, and that's what you see out here.”

Dauster indicated another year of seasoning in college could serve Lewis well.

“If he leaves, I think he’d get drafted in the second round," Dauster said. "If he comes back, I think he’s one of the guys that I’ll peg as having a real shot to leap up into the lottery next year.”

WEAKNESSES: Perimeter shot is getting better but still needs work; has more turnovers than assists.

G JUSTIN MOORE, VILLANOVA: The 6-4, 210-pound junior guard, who missed Saturday's game against UConn with a left ankle injury, came back to score 16 points in a win over St. John's on Tuesday. He struggled with his shot in his previous two games, combining to go 5 for 21 overall and 2 for 12 on 3s.

JULIAN CHAMPAGNIE, ST. JOHN’S: The 6-8, 215-pound junior forward broke out of a mini slump with six 3s and 27 points against Georgetown last week. He followed that with 21 points and eight rebounds against Butler but was just 4 of 15 with 12 points against Villanova on Tuesday.

AMINU MOHAMMED, GEORGETOWN: The 6-5, 210-pounder led the struggling Hoyas with 18 points on 7-of-11 shooting and had four rebounds, three steals and two assists against Providence. The Big East's preseason freshman of the year is tied for the league lead with six double-doubles.