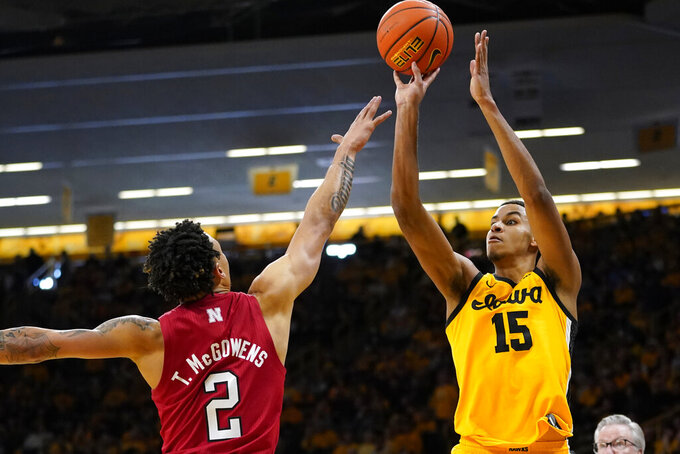 Keegan Murray has a chance to do something no Iowa player has accomplished in over two decades.

The 6-foot-8 sophomore forward is scoring 23.3 points per game to rank third among all Division I players, behind only Bryant’s Peter Kiss and Detroit Mercy’s Antoine Davis. The variety of different ways he can score is even more impressive than the numbers themselves.

That’s why very few players figure to get drafted ahead of Murray once he decides to turn pro.

Murray’s ability to score in just about any situation makes him so appealing.

“He’s the most versatile player in our league,” Nebraska coach Fred Hoiberg said.

Hoiberg made that comment after Murray scored 37 points in a 98-75 victory over Nebraska. That followed Murray’s 30-point performance in a 110-87 triumph at Maryland, making him the first Iowa player to score at least 30 points in consecutive Big Ten games since Matt Gatens in 2012.

“If I miss a shot, I feel like the next one’s going to go in,” Murray said. “I’m not hesitant at all to shoot the basketball. I try to get to my spots, try and get inside the paint as much as I can, look for open jump shots along the 3-point line.”

STRENGTHS: A great scorer who can get his points in many different ways, whether he is around the basket or beyond the 3-point arc.

WEAKNESSES: His defense isn't quite up to the level of his offense at this point.

DRAFT PROJECTION: He should get selected among the first 10 or 15 picks.

G JOHNNY DAVIS, WISCONSIN: Davis, a likely lottery pick, scored No. 15 Wisconsin’s final 13 points as the Badgers rallied for a 74-69 victory at Indiana on Tuesday. The 6-5 sophomore finished the game with 30 points and 12 rebounds.

G JADEN IVEY, PURDUE: Ivey is a potential top-five pick and likely will be the first Big Ten player selected if he chooses to enter the draft. The 6-4 sophomore is averaging 17.4 points, 5 rebounds and 3.1 assists heading into the fifth-ranked Boilermakers’ Wednesday night game with Northwestern.

F E.J. LIDDELL, OHIO STATE: Liddell has scored at least 16 points in six straight games as he makes his case for first-round consideration. The 6-7 junior averages 19.9 points, 7.6 rebounds and 2.9 assists per game.