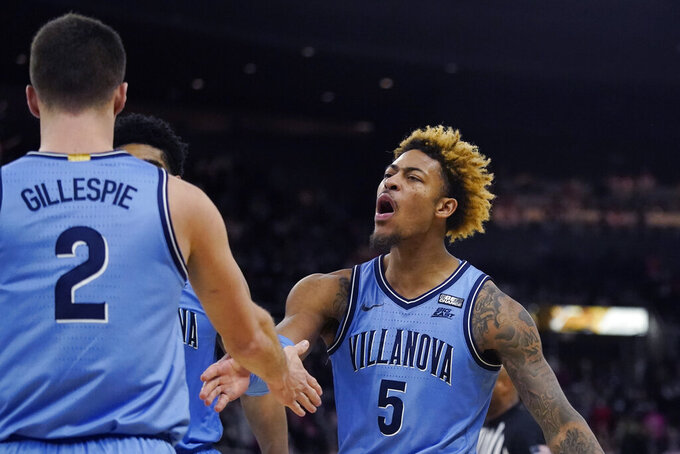 Villanova's Justin Moore has been one of the most dependable and productive guards in the Big East over three seasons and has developed in a program that produces guards capable of making smooth transitions to the pros.

“I think the pedigree of Villanova alums developing into good, solid NBA role players is probably the best thing that he has going for his right now,” Field of 68 Media Network founder Rob Dauster said in an email.

Moore has battled some injuries this season and missed the Feb. 5 game against Connecticut with a bad ankle. Since then, he has averaged 16.4 points per game. In 83 career games, including 68 starts, he has averaged 13.1.

“The way that Jay Wright wants to play is really similar to that of NBA teams,” Dauster said. “They switch into mismatches defensively, they don’t run a ton of set plays and, instead, their offense is very much built on ball-screens and creating/attacking closeouts. Moore, as you might expect, is really good at these things. Smart player, good decision-maker, high-level shooter off the catch and off the bounce.”

Moore has a scorer's mentality and is effective at the rim and in the mid-range. His 3-point shot has been a bit off in recent games but that hasn't stopped him from letting it fly.

“The difference between him and some of the other wings that Villanova has produced in recent seasons is the physical tools,” Dauster said. “Mikal Bridges is 6-6 with a 7-0 wingspan and can essentially play the point at times if needed. Justin Moore is 6-foor-4 without the benefit of Condor arms. Donte DiVincenzo is a freak athlete. He posted the highest max vertical at the combine in 2018. Justin Moore is not that level of athlete.”

That doesn't mean Moore will be overlooked if he decides to leave college after his junior season. Dauster compared Moore with former Villanova star Phil Booth, who since going undrafted in 2019 has played in the G League and overseas.

“I think he’s going to get his chance to prove himself, whether it’s just an invite to an event like Portsmouth or a G-League/two-way contract whenever he opts to leave,” Dauster said of Moore, “but at this point I think he’s closer to being Phil Booth than he is to being a guy that gets drafted.”

WEAKNESSES: Slightly undersized for his position at next level, average athleticism, can be streaky shooter.

DRAFT PROJECTION: Free agent if he opts to leave school after this season.

JULIAN CHAMPAGNIE, ST. JOHN’S: The 6-8, 215-pound junior forward is the top Big East draft prospect. He has elevated his game after a midseason lull and leads the league with 19.2 points per game. He scored 31 against Butler last Friday after scoring 27 the game before against Xavier.

JUSTIN LEWIS, MARQUETTE: The 6-7, 245-pound redshirt freshman disappeared in crunch time in an 83-82 loss to Creighton on Sunday. He's scored in double figures in 13 straight games and is tied for second in the Big East at 16.6 per game.

AMINU MOHAMMED, GEORGETOWN: The 6-5, 210-pound freshman is still the best thing going for a Hoyas team that's 0-15 in conference play. He's averaging 13.8 points and 8.1 rebounds for the season but has struggled with his shot the last two games, going a combined 4 of 22 for 21 points against Marquette and Villanova.