NC State aims to avoid bubble, return to NCAAs in 2020 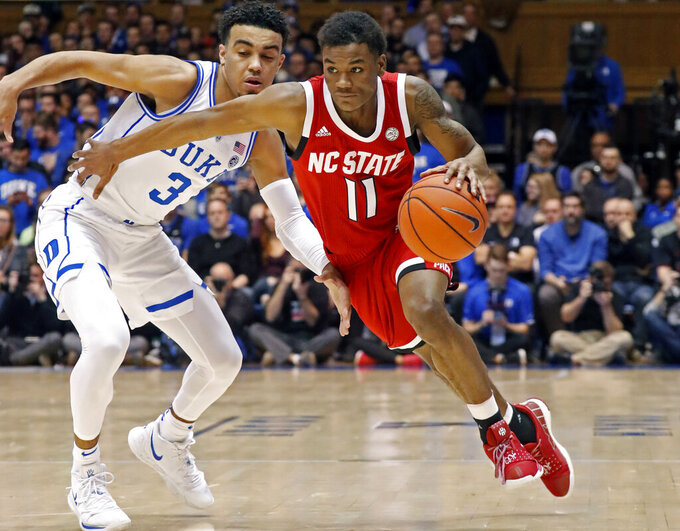 FILE - In this Feb. 16, 2019, file photo, North Carolina State's Markell Johnson (11) drives against Duke's Tre Jones (3) during the first half of an NCAA college basketball game, in Durham, N.C. Johnson is the top returning scorer for the Wolfpack and is a preseason all-Atlantic Coast Conference second-team pick. (AP Photo/Chris Seward, File) 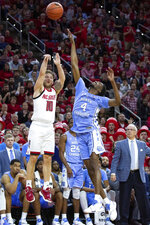 RALEIGH, N.C. (AP) — The motivation for North Carolina State is clear this season: don't be on the wrong side of the bubble come NCAA Tournament time.

The drive to return there for the second time in three seasons under Kevin Keatts will lean on a deep perimeter led by preseason all-Atlantic Coast Conference pick Markell Johnson. That group offers versatility and the potential to play more of Keatts' pressure style than at the start of his tenure, which could help them claim some marquee wins lacking from a resume that landed them in the NIT last year.

"That was one big thing we heard a lot this summer," junior guard Braxton Beverly said of the tournament snub.

The Wolfpack lost leading scorer and rebounder Torin Dorn (14 points, 7.2 rebounds), but the next six scorers return to a team picked to finish sixth in the 15-team ACC.

It starts with Johnson, a 6-foot-1 senior point guard and preseason all-ACC second-team pick who averaged 12.6 points and 4.2 assists. He's shown the ability to take over games for stretches, though Keatts has also had to work to extract a start-to-finish edge from him, too.

"Not a lot of teams have a 24-win season and not make the tournament," said Pat Andree, a graduate transfer from Lehigh. "Yeah, it was definitely a point of conversation with the guys coming in. Everybody's pretty hungry to make it this year."

There is uncertainty about N.C. State's front line.

Top returning big man D.J. Funderburk (8.8 points, 4.2 rebounds) is suspended indefinitely for a violation of team policy, and Keatts has said there is no timetable for his return. N.C. State will have 6-11 redshirt freshman Manny Bates to help protect the rim, though he missed last season following shoulder surgery.

North Carolina State needs Beverly's outside shot to be more on target.

Beverly has proven he can hit big 3s, most notably with his buzzer-beater against Clemson in January. But Beverly's 3-point percentage dipped from his freshman to sophomore years (38.5% to 34.7, including struggles in losses to Virginia Tech (0 for 9), Georgia Tech (0 for 7) and eventual national champion Virginia (0 for 5) in the ACC Tournament.

North Carolina State will start the season with the program facing four serious NCAA charges amid the federal corruption investigation into college basketball. The NCAA has suspended filing deadlines in the case and it's unclear when it could reach resolution.

No one from the current staff or roster are accused of wrongdoing, and Keatts is keeping the team's focus on the court.

North Carolina State was criticized for a soft nonconference schedule that did it no favors on Selection Sunday. There are at least some better games to help the Wolfpack this time around along with the ACC's move to a 20-game league slate, starting with the Nov. 5 opener against Georgia Tech at home.

The Wolfpack plays No. 14 Memphis and its touted freshmen in Brooklyn (Nov. 28), hosts Wisconsin in the ACC/Big Ten Challenge (Dec. 4), visits a UNC Greensboro team that won 29 games last year (Dec. 15) and then travels to No. 24 Auburn (Dec. 19) in a rematch of the game won by the Wolfpack last year against a team that wound up in the Final Four.