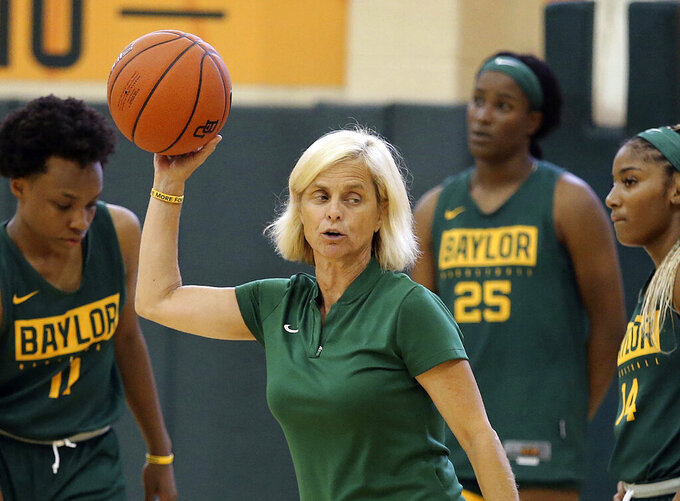 FILE - In this Sept. 30, 2019, file photo, Baylor women's coach Kim Mulkey, center, talks with players during the NCAA college basketball team's practice in Waco, Texas. The NCAA Division I Council on Wednesday, June 17, 2020, approved a plan to allow college basketball players to start working with their coaches for the first time since the pandemic wiped out March Madness. The summer access period for men's and women's players will begin July 20. (Jerry Larson/Waco Tribune-Herald via AP, File)

The NCAA Division I Council on Wednesday approved a plan to allow college basketball players to start working with their coaches for the first time since the pandemic wiped out March Madness.

The summer access period for men's and women's players will begin July 20. The NCAA basketball tournaments were cancelled days before the fields were scheduled to be selected because of the coronavirus outbreak.

The NCAA also announced the expected approval by the council of an extended preseason model for football teams that was finalized by that sport's oversight committee last week.

And the council introduced a legislative proposal to create a path for schools to transition straight from Division III to Division I, paving the way for D-III football powerhouse St. Thomas (Minn.) to make that jump as soon as next year.

In basketball matters, required activities for both men's and women's teams can begin July 20 and last up to eight weeks until Sept. 15 or the first day of classes, whichever comes first. Those activities include weight training, conditioning and skills instruction with coaches supervising for up to eight hours per week. Skills instruction can not exceed four hours per week and no days off are required.

The original proposal from the basketball oversight committee's asked for an 18-day period from July 1-19 when basketball players could add “enhanced in-person nonphysical activities" to the already permissible voluntary weight training and conditioning at team facilities. Those enhanced activities included team and individual meetings requested by the athletes and film study.

The council instead extended the current rule, allowing voluntary activities and up to eight hours per week of virtual activities through July 19.

The council deferred a decision on a proposal to restart off-campus basketball recruiting and altering the calendar.

“The Council worked to balance the desire to get student-athletes training again with the need to repopulate our campuses and athletics facilities gradually and safely, within all campus, local and state mandates,” said council chairwoman Grace Calhoun, who is the athletic director at Penn.

The council needed more time to consider the recruiting recommendations and will vote on the recruiting calendar in a few weeks. It will also consider adding more activities for basketball players during the July 1-19 period.

In men's basketball, the recruiting proposal called for tournaments and scouting events usually held in April, June and July to be held in August, with coaches permitted to attend. Off-campus and in-person recruiting for coaches would begin in September.

As for the current players, on Sept. 15 or the first day of classes, whichever comes first, team can transition to out-of-season workouts, similar to summer access but two days off per week are required.