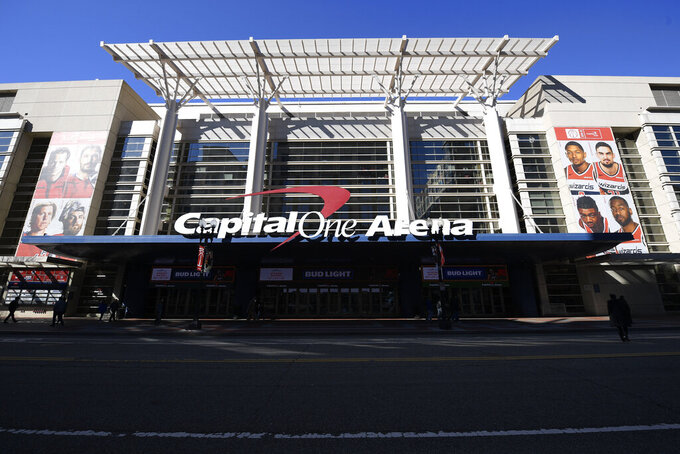 The exterior view of Capital One Arena is seen, Saturday, March 16, 2019, in Washington. As NCAA prepares to stage its first basketball championships since the Supreme Court allowed legal sports betting in any state that wants it, the organization remains opposed to gambling on its events. But it’s not denying reality, either. This year, at least one and likely two women’s games will be played in Mississippi, where people have been betting on college sports since last summer, and men’s games will be played in Washington at Capital One Arena, which could have a full-service onsite sports book this time next year. Future NCAA Tournament games are scheduled for Wells Fargo Center, an 11-mile drive from the sports book at Harrah’s Philadelphia. (AP Photo/Nick Wass)(AP Photo/Nick Wass)

WASHINGTON (AP) — As the NCAA prepares for its first basketball championships since the Supreme Court allowed legal sports betting to expand, the body governing college sports remains opposed to gambling on its events. But it's not denying reality, either.

The NCAA had a longtime ban on bringing championships to places where sports wagers were legal. That was suspended last year in the wake of the Supreme Court decision to end an effective monopoly for Nevada. Three women's tournament games will be played this weekend in Mississippi, where people have been betting on college sports since last summer, and men's Sweet 16 and Elite Eight games will be played next week in Washington at Capital One Arena, which could have a full-service onsite sportsbook by this time next year.

Future NCAA Tournament games are scheduled in Philadelphia, Pittsburgh and Providence, Rhode Island, near casinos taking sports bets, while two thirds of predetermined sites for the men's tournament this year and next year are in states that have considered bills to legalize wagers.

The NCAA is still trying to figure how to acknowledge the spread of legal bets. It could ask for a ban on all gambling-related advertisements during its events, or even demand that any onsite sportsbooks developed be temporarily closed. But it won't be moving future events out of states or arenas where gambling is legal, because gambling-free zones are likely to become fewer and fewer.

"We anticipate that probably by 2020 or 2021 there will be potentially 30 states that are allowing sports wagering," said Joni Comstock, the NCAA's senior vice president for championships. "We're going to have to work in the environment that we have."

The NCAA's board of governors will be considering new gambling policies at its next several meetings, Comstock said. In the meantime, it will seek guidance from conferences that have been less squeamish about the proximity of gambling to their events. This year, the Pac-12 and the West Coast Conference held their men's and women's tournaments in Las Vegas.

Although legal sports betting is spreading quickly, some states are restricting wagers on amateur events. In five states, bets can be placed on college sports without any restrictions: Mississippi, Nevada, New Mexico, Pennsylvania and West Virginia. Delaware and Rhode Island don't allow bets on in-state college teams. Neither does New Jersey, although that state has a provision allowing bets on multi-site collegiate tournaments as long as some games are played outside New Jersey.

The District of Columbia has also authorized sports betting, although the law has yet to take effect and it says nothing about college sports. The decision on whether to allow those bets will be up to city regulators. In part because Washington has no casinos, the law authorizes sportsbooks at stadiums and arenas, including Capital One Arena, home to the Wizards and Capitals. Ted Leonsis, who owns both teams, has enthusiastically supported legal gambling and this month bought out a popular sports bar in the arena. The space could be transformed into a sportsbook.

Comstock said the NCAA is repeating its warnings to players and coaches about rules against any association with gambling, no matter the venue. There are obvious concerns about players who are compensated only with athletic scholarships being tempted to shave points or throw games. The gambling industry argues those questions are nothing new and that legal, regulated gambling makes scandals less likely.

"Of all the athletes who would potentially be compromised, it would be athletes who are not getting paid, so when you operate in a nebulous world where there is not transparency and you don't have the ability to see when anomalies and erratic behavior is occurring through a legal, regulated sports betting system, you don't have the ability to combat what may be happening," said Sara Slane, senior vice president of public affairs at the American Gaming Association.

The AGA points to the history of Las Vegas regulators closely monitoring suspicious bets and the lack of any scandal associated with college events played there.

"There's a long track record where the industry, the gaming industry, has worked in partnership with a lot of the leagues including the NCAA when they suspected something was happening, alerting them of possible corruption," Slane said.

As much as the NCAA officially distances itself from gambling, interest from bettors is a major reason for the NCAA Tournament's popularity — and that translates into revenue for the organization.

Operators of newly opened sportsbooks are excited about the business they'll bring in from their first March Madness. At the Beau Rivage casino in Biloxi, Mississippi, fans will be able to bet on the Mississippi State and Mississippi men's teams and the top-seeded Mississippi State women — who are slated to host first- and second-round games. The sportsbook didn't offer bets on regular-season women's games.

"Absolutely, it's a positive," Will Hall, manager of the Beau Rivage sportsbook, said about having local teams in the tournament. "I'll tell you what else is going to be a big draw is the LSU men's team. They're extremely popular down here."

Hall said he doesn't think March Madness will be as big a deal for Mississippi casinos as college football and the NFL — at least not this year.

"It's so popular now in Vegas that people plan for it a year in advance," he said. "I think next year with our exposure and stuff that we'll get this year, it'll be over the top."