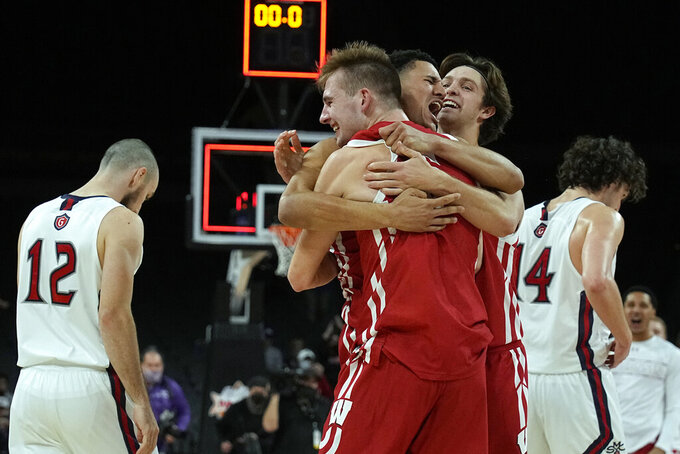 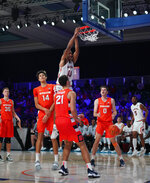 Instead, the Bears rolled through the Battle 4 Atlantis. They were among a group of teams — including Maui Invitational champion Wisconsin and No. 5 Duke in its takedown of No. 1 Gonzaga — that thrived over Thanksgiving week after retooling in the offseason.

It's quite a starting point if each continues an upward trajectory, too.

“It’s kind of like dating,” Drew said of two-time transfer James Akinjo as his new point guard. “You just start dating somebody, you’ve got to figure things out. When you’re married a couple of years, you know what your wife likes and doesn’t like. We’ll continue to go through that process.”

The Bears' departed starters include a first-team Associated Press All-American in Jared Butler, a third-team All-American and No. 9 overall NBA draft pick in Davion Mitchell and their second-leading scorer in MaCio Teague.

Drew turned to Akinjo, who had prior stops at Georgetown and Arizona. Talented freshman forwards Kendall Brown and Jeremy Sochan arrived. Returnees like L.J. Cryer and Matthew Mayer stepped into bigger roles. And Baylor (7-0) keeps winning big, the last against Michigan State in the Atlantis title game with Akinjo as MVP.

“Nobody cared who scored, they all played pretty hard defensively," Spartans coach Tom Izzo said. “It was nice to watch. Unfortunately I had to watch them from a negative side.”

At the relocated Maui Invitational in Las Vegas, Wisconsin beat Texas A&M, No. 12 Houston and Saint Mary's with its youngest team in decades. The Badgers (5-1) lost six seniors and have two returning starters and 12 underclassmen. The average age of their opening-night starting lineup was 19.8 years, down from 22.6 last year.

The driving force was sophomore Johnny Davis, who averaged 23.7 points and 6.7 rebounds over three games to become the Maui MVP. Davis averaged 7.0 points as a freshman reserve but is playing roughly 32 minutes a game in a starring role.

“I’m learning just like everybody else is watching this group mature and grow in front of us,” Wisconsin coach Greg Gard said after the win against the Cougars.

Then there were the Blue Devils (7-0), who beat Gonzaga in Las Vegas on Friday in a late-March-caliber game. Duke missed the NCAA Tournament for the first time since 1995 last season, but reloaded with a top-flight recruiting class, a veteran boost from Marquette transfer Theo John and a surge from veteran co-captain Wendell Moore Jr.

That group could have a claim to No. 1 in Monday's AP Top 25 in Hall of Famer Mike Krzyzewski's final season.

“Since the offseason, every day we've been trying to come in and be consistent and practice well,” star freshman Paolo Banchero said. “One thing is no bad practices. ... So when you just stack days like that, coming in every day and be consistent, in big games like this you're going to be able to pull out wins and battle it out.”

The Gonzaga-Duke battle came three days after the Zags offered a reminder of their upside by dominating No. 2 UCLA in Las Vegas. The performance included shooting 56% with No. 1 national recruit Chet Holmgren among four players with at least a dozen points.

“That's the beauty of our system: Anybody can step up on any given night,” coach Mark Few said. “And this team is so unselfish.”

There was also a wild opening-round game of the Battle 4 Atlantis between No. 19 Auburn and No. 22 UConn, with the Huskies claiming a 115-109 double-overtime win that had the feel of a second-weekend NCAA Tournament matchup.

Holmgren and Banchero have attracted the most attention among top freshmen, but Auburn's Jabari Smith his having his own strong start.

The 6-foot-10 McDonald's All-American stood out as an Atlantis all-tournament pick, balancing his outside shooting with stretches of back-to-the-basket work. He averaged 19.3 points against UConn, Loyola Chicago and Syracuse, including going 15 for 26 (58%) in the last two.

Izzo's Spartans grinded through a tough win against UConn in the Atlantis semifinals, but faded against Baylor's second-half surge to cap a tournament performance that had Izzo promising “a few changes."

His concerns: 51 turnovers in three games and getting tougher mentally.

“We're going to do some different things,” Izzo said, “because it's easy to get better physically. ... Mentally it's a little harder.”