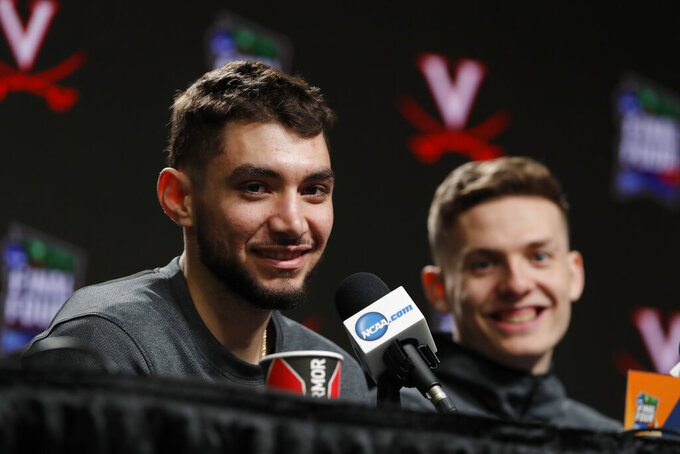 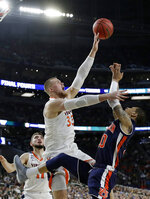 MINNEAPOLIS (AP) — The Latest on the championship game of the NCAA Tournament between Virginia and Texas Tech (all times local):

Texas Tech guard Matt Mooney is encouraging all those fans back in Lubbock to take whatever happens in the national title game against Virginia on Monday night in stride.

That's after riots ensued after a semifinal win over Michigan State.

"Don't burn down Lubbock before we get back," Mooney said, suppressing a smile before heading out for a final practice. "I know it was crazy out there. Just be safe."

The city of Lubbock said in a statement that hundreds of fans gathered near campus and "engaged in extremely dangerous, and disappointing, behavior that included vandalizing property."

Texas Tech coach Chris Beard wasn't particularly pleased with it, either, saying that "I just hate the actions of a few have put Lubbock in that life."

Either Texas Tech was indulging in some gamesmanship the day before the national championship game against Virginia or the Red Raiders have some real concerns about the availability of a key player.

Coach Chris Beard declined to give an update on the status of forward Tariq Owens, who rolled an ankle during the victory against Michigan State in the Final Four. Owens left the game in the second half, but did return to play some more.

Owens said after the game a new tape job allowed him to go back in and that he would be fine for the championship game against Virginia on Monday.

The St. John's transfer who led the team in blocked shots at 2.5 per game was not made available to the media with the rest of the team on Sunday. So for now, his status is TBD.

Ty Jerome knows he double-dribbled in the closing seconds of Virginia's stunning Final Four victory against Auburn — even though the officials did not call it. The Cavaliers' junior guard also said he was fouled by Auburn's Bryce Brown as he was trying to retrieve the ball on that heavily scrutinized sequence.

"I knew they weren't going all double-dribble after they let that one go," Jerome told reporters. "It's hard to be a ref. They miss a lot. So you've got to play on."

Play on Virginia and Auburn did and the Cavaliers won on three free throws from Kyle Guy with less than a second left.

Virginia has reached the national championship game with two straight wild tournament escapes. Yet to listen to the Cavaliers, that first game against Gardner-Webb might have been just as critical.

The Cavaliers had spent the past year answering questions about that unprecedented UMBC loss, the first time a 16-seed had taken down a No. 1 in tournament history. Then they found themselves down double figures in the first half against Gardner-Webb in the South Region, a moment that threatened to somehow repeat the improbable.

To listen to Virginia players and coaches, getting through that moment was a huge help.

Center Jack Salt said the win "definitely took some pressure off our shoulders" and helped with confidence. Associate head coach Jason Williford added: "I think we had to get through that moment, it was a huge moment for the program."

No matter what happens in the title game between Virginia and Texas Tech, the ACC already will walk away from this NCAA Tournament with significant bragging rights.

The conference is 14-6 through 66 games in the tournament, the most wins of any of the 32 conferences in March Madness. Virginia winning the title would give the ACC at least two more wins than any other league.

The Big Ten is 13-8 after Michigan State lost to Texas Tech on Saturday night. The Red Raiders with five wins are carrying the Big 12 at 8-5, with a chance for one more victory. The SEC finished the tournament 12-7.

Of course, the Big Ten won the conference battle this year in another, important respect: the money. The league has earned at least $35.5 million with its showing this year, based on the payout system the NCAA uses to distribute money from the massive television deal for March Madness. The ACC made at least $33.8 million and the SEC with its highest share ever generated at least $32.1 million.

The last game of the long grind of the NCAA Tournament is finally here: Texas Tech, Virginia, a championship on the line.

It's setting up as a clinic on defense. Fans are buying into that billing, too — gamblers drove down the over/under on the game from 121 to 117½ rather quickly after the Cavaliers and Red Raiders won in the Final Four.

The teams have another round of practice on Sunday before the game on Monday night. Players and coaches are also meeting with reporters for the last time before the confetti falls in Minneapolis.