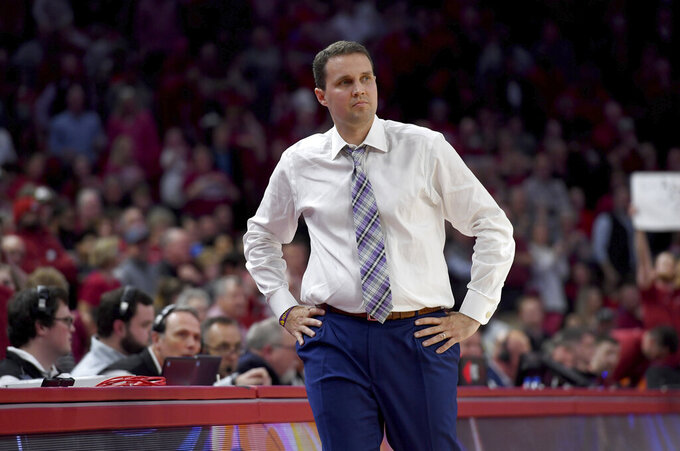 FILE - In this March 4, 2020, file photo, LSU coach Will Wade watches the team play Arkansas during an NCAA college basketball game in Fayetteville, Ark. NCAA enforcement officials say Wade is suspected of offering or providing “impermissible benefits” to 11 prospective recruits or people associated with them. The allegation is detailed in documents made public Wednesday, Aug. 26, by LSU. (AP Photo/Michael Woods, File)

The allegation is detailed in documents made public Wednesday by LSU.

The documents include NCAA vice president of enforcement Jonathan Duncan’s request on July 15 that a probe into Wade's recruiting tactics be referred to the NCAA’s Independent Accountability Resolution Process.

That process, which is set up to handle complicated infractions cases, has been known to take six or more months to play out, making it likely that Wade will remain LSU’s coach through the 2020-21 season — unless the coach chooses to step down, or new and explosive evidence surfaces before or during the upcoming season.

In Wade’s case, NCAA enforcement officials allege that the LSU coach and his attorneys have engaged in uncooperative behavior that has “delayed resolution dramatically.”

NCAA officials also contend that even LSU athletics officials have struggled to get Wade to cooperate in a forthcoming and timely manner.

NCAA officials say because of delays caused by Wade, they have been able to interview just 16 of 75 people believed to have knowledge of or involvement in violations in the case.

LSU senior associate Athletic Director Robert Munson said Wednesday that LSU cannot comment on a pending case beyond documents it has made available. The documents were posted online by LSU after The Advocate of Baton Rouge initially obtained them in a public-records request.

Those documents include a written response from LSU that states LSU also was frustrated by the pace at which the case was moving, “but believed at every juncture that coach Wade and his counsel were acting in good faith.”

LSU’s written response to the NCAA includes details about Wade’s lawyer being diagnosed with cancer, requiring treatment that included multiple surgeries and chemotherapy, which made it difficult for him to comply with investigators’ requests as quickly as he would have liked.

The Wade investigation grew out of a Yahoo report quoting FBI wiretaps in which the LSU coach discussed a recruiting offer in a phone call with Christian Dawkins, one of several men who was convicted in 2018 of funneling improper cash benefits to families of recruits in exchange for player commitments to certain colleges.

After initially refusing to meet with LSU administrators about that report, Wade was suspended for LSU’s final regular-season game of 2019, along with the SEC and NCAA tournaments that season.

Wade was reinstated after agreeing to meet with LSU in April 2019, but he also agreed to a new contract in which he forfeited certain performance bonuses and agreed to new language allowing LSU to fire him with cause should the school receive an NCAA notice of allegations for major violations, classified as a “Level 1” or “Level 2” violation.

In this case, such notice would not come until after the normally lengthy Independent Accountability Resolution Process has played out.