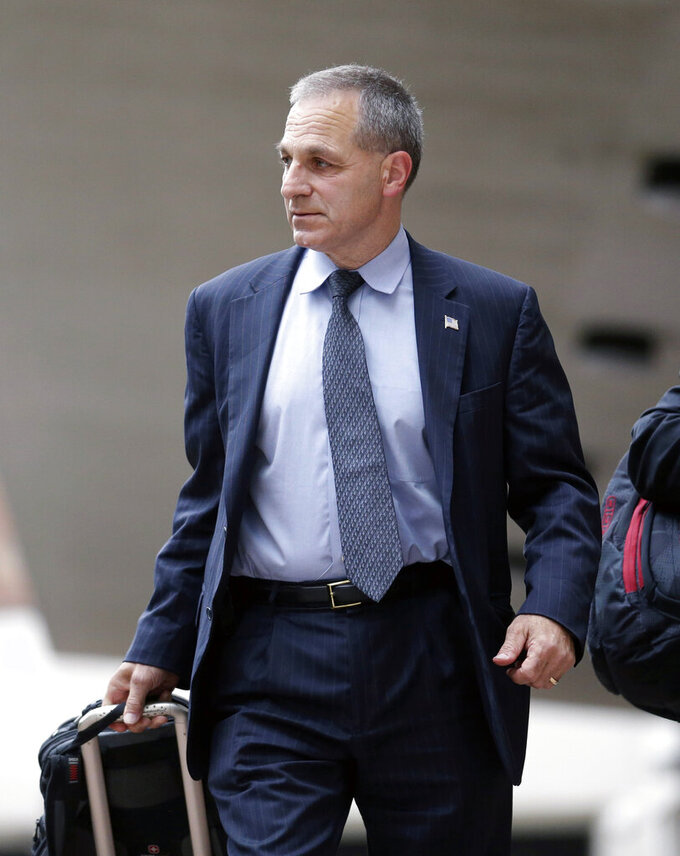 FILE - In this July 2, 2013, file photo, former FBI Director Louis Freeh leaves Federal Court in New Orleans. The NCAA unveiled a new arm of rules enforcement made up of independent investigators, advocates and decision-makers to handle what it calls complex cases involving serious infractions. The Independent Accountability Resolution Process will be comprised of four groups, including the Complex Case Unit, which will conduct investigations and provide representation for schools and individuals accused of violations. Among those chosen for the CCU were former FBI Director Louis Freeh. (AP Photo/Gerald Herbert, File)

The NCAA introduced Thursday a new arm of rules enforcement made up of independent investigators, advocates and decision-makers to handle complex cases involving serious infractions.

Creating a new process for dealing with some high-profile infractions cases was one of several recommendations made last year by the Rice Commission on college basketball. The commission, created in response to an FBI investigation into college basketball recruiting, concluded the NCAA's existing investigation and enforcement structure was rife with potential and perceived conflicts of interest.

The current investigative process relies on schools self-reporting and self-investigating. The committee on infractions, which determines whether schools should be penalized and how, is made up of high-ranking administrators from NCAA member schools and conferences.

The Independent Accountability Resolution Process will be comprised of four groups, including the Complex Case Unit, which will conduct investigations and provide representation for schools and individuals accused of violations. Among those chosen for the CCU were former FBI Director Louis Freeh, who investigated the role of Penn State officials in the Jerry Sandusky child sexual-abuse scandal, and attorney Tom Mars, who has recently helped several high-profile football players gain immediate eligibility from the NCAA after transferring.

The Independent Resolution Panel will conduct hearings, decide whether violations occurred and hand down penalties. The panel has 15 members that will work in groups of five on cases referred to the Independent Accountability Resolution Process.

"The folks that were identified that will serve in these different capacities ... will all be individuals who have no direct affiliation with any NCAA member schools," Naima Stevenson Starks, the NCAA's vice president of hearing operations, told the AP.

"Although this is not a legal process, we do have individuals that have legal backgrounds. Arbitrators, particularly for those individuals that will be the adjudicators in this process," she said. "We've got a few folks that are former student-athletes so they will have some perspective on athletics and that experience at a college campus, but no one who was closely linked in time with a direct affiliation with college athletics.

"We do have a few individuals who may have had some direct involvement either at the national office or in the membership, but it would have been a good amount of time since that experience was relevant."

Members of the Resolution Panel will serve yet to be determined terms, likely ranging from 2-4 years. Stevenson Starks said the goal is to have some experienced members on the panel to complement new members.

Stevenson Starks said a request for proposal was used to solicit firms and investigative entities that had an interest in joining the Complex Case Unit. A search firm was used to identify candidates to serve on the Resolution Panel.

"There will be orientation to appropriately position all the various folks that will be involved with the Independent Accountability Resolution Process to try to get them up to speed," Stevenson Starks said. "On the one hand the independence was of the utmost importance, but it also leads into the need for some additional ramp up since these folks will have not been familiar with the operation of college athletics and the rules adopted by the membership."

All potential infractions cases still will be initiated by schools or NCAA enforcement. There are three ways to request a case be moved to IARP.

"A school that is involved in an in infractions matter in the existing structure could request to have their case removed to the independent structure. The vice president of enforcement can make that request as well. And the last entity that can refer a case is the (Division I) committee on infractions," Stevenson Starks said.

A five-member Infractions Referral Committee will determine whether cases will be moved out of the traditional enforcement process.