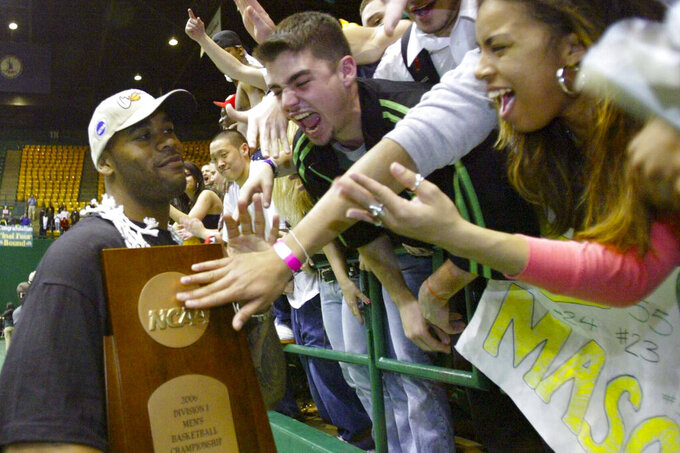 FILE - In this March 26, 2006, file photo, George Mason's Jai Lewis carries the NCAA Regional championship trophy as he greets fans at their home arena, the Patriot Center, in Fairfax, Va. Earlier in the day, George Mason advanced to the NCAA men's Final four in Indianapolis after defeating Connecticut in Washington. (John McDonnell/The Washington Post via AP) 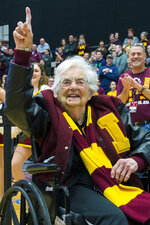 If not for those magical eight days seven years ago, Florida Gulf Coast might still be that upstart school trying to create an identity in the Sunshine State, never mind nationally.

The high-flying Eagles and their showstopping offense earned their place in NCAA Tournament lore when, as a No. 15 seed in the South Region, they upset Georgetown and San Diego State in Philadelphia to reach the 2013 Sweet 16. Their run ended when, emotionally drained, they lost their regional semifinal to Florida.

No team seeded so low has gone so far. They remain the biggest party crashers in tournament history, not just because of their seeding but also because they were in only their second season of Division I eligibility.

"It helped everybody's career with what they wanted to do next in life,” said Brett Comer, the point guard who fed lobs to guys like Chase Fieler and Eric McKnight for an array of electrifying dunks that introduced the team and then-16-year-old school in Fort Myers to an enraptured audience coast to coast.

Three days after the last of Dunk City's 148 dunks that season, coach Andy Enfield was hired at Southern California and his salary went from $157,000 a year to well over $1 million.

Sherwood Brown — the team's leading scorer and Atlantic Sun player of the year — was invited to seven NBA tryouts before beginning his pro career overseas. Without Dunk City, NBA teams probably wouldn't have taken notice of the player who showed up at FGCU as a walk-on.

Comer was in the NBA G League before a knee injury ended his career. He's now director of player development at Dayton after two years as a graduate assistant. He said he's convinced name recognition helped him get hired by Flyers coach Anthony Grant.

Michael Fly, who just finished his second season as head coach after succeeding Joe Dooley, was one of Enfield's assistants in 2013. He and current assistant Joey Cantens are the last links to the original Dunk City. Since 2014, the Eagles have won or shared six Atlantic Sun regular-season or tournament championships and made two NCAA appearances.

“I'm not a head coach and we don't win as many championships as we have here without that (2013) team," Fly said. "It's changed a lot of our lives for the positive.”

The Dunk City Effect, as it's called, accounted for a 35% increase in freshman applications following the NCAA run and boosted enrollment to about 15,000.

The surprise NCAA run opened with the Eagles taking down Georgetown 78-68, a game highlighted by a Comer-to-Fielder lob dunk that took the steam out of the Hoyas' comeback bid in the last 2 minutes and inspired a rap song.

FGCU then beat seventh-seeded San Diego State 81-71, and reporters and network morning shows began invading the Fort Myers campus to see what Dunk City was all about. It was a major distraction for the upstart Eagles in the days before their Sweet 16 game against Florida.

“I think we ran out of gas,” Comer said. “We weren't used to the amount of media coverage we had. We were going to do as much media stuff as we could to promote the school, promote the brand, which is good for everybody. When it got to the game, it wore us down."

The Eagles got out to a double-digit lead against the third-seeded Gators. But Florida made adjustments and won 62-50.

Seven years later, Dunk City branding is all over campus.

“It's made the follow-up acts extremely difficult and pressure-filled,” Fly said. "We had years when Coach Dooley was here where we would have 20-plus wins and lose in the conference championship game. Casual fans in Fort Myers would say to me, ‘We hope you can get back to where you were before.’”

Coach Kevin Mackey and his band of unknowns made it to the Sweet 16 as a No. 14 seed, beating Bobby Knight-coached and Steve Alford-led Indiana and then St. Joseph's.

Next up was Navy and David Robinson, the 7-foot star who was that year's No. 1 pick in the NBA draft. Robinson banked in a shot with 5 seconds left to give the Midshipmen a 71-70 win. The Vikings didn't return to the tournament until 2009.

Coach Mack McCarthy liked to talk barbecue as much as basketball, maybe more, and the moment never seemed too big for a loose and confident team that was a 14 seed and started two walk-ons.

The Mocs started with a flurry, taking control early in a first-round win over Georgia. They beat Illinois by double digits after getting the vibe the Illini were taking them lightly. The fun ended in the Sweet 16 with a 71-65 loss to Providence.

The Tigers were ranked as high as No. 2, but a midseason slump left them in sixth place in the Big 12 at the end of the regular season. They went to the tournament as a No. 12 seed.

Mizzou opened with double-digit wins over Miami and Ohio State, and Kareem Rush's 3-pointer started a second-half comeback that carried the Tigers past UCLA. They finally lost in the Elite Eight, 81-75 to Oklahoma.

No one saw a Final Four run coming after George Mason lost in the Colonial Athletic Association semifinals. In fact, when the 22-win Patriots were announced as No. 11 seed, college basketball analyst Billy Packer declared Jim Larranaga's team didn't even belong in the tournament.

George Mason beat Michigan State, North Carolina and Wichita State before taking down No. 1 seed Connecticut and its roster full of NBA talent 86-84 in overtime. They lost 73-58 to eventual national champion Florida in the semifinals.

One of the lasting memories of the tournament was the Ramblers' telegenic and now-100-year-old team chaplain, Sister Jean Dolores-Schmidt. What they did on the court was pretty memorable, too.

Their run to the Final Four as an 11 seed never seemed short of drama. There was Donte Ingram making a 3-pointer with three-tenths of a second left to beat Miami. They got past Tennessee thanks to Clayton Custer's jumper with 3.6 seconds to play. Marques Townes' 3 with 7 seconds left held off Nevada's comeback bid in the regional semifinals. All that made a 16-point win over Kansas State in the Elite Eight look easy.

The Ramblers' 14-game win streak finally ended when Michigan erased a 10-point deficit in the second half to beat them 69-57.