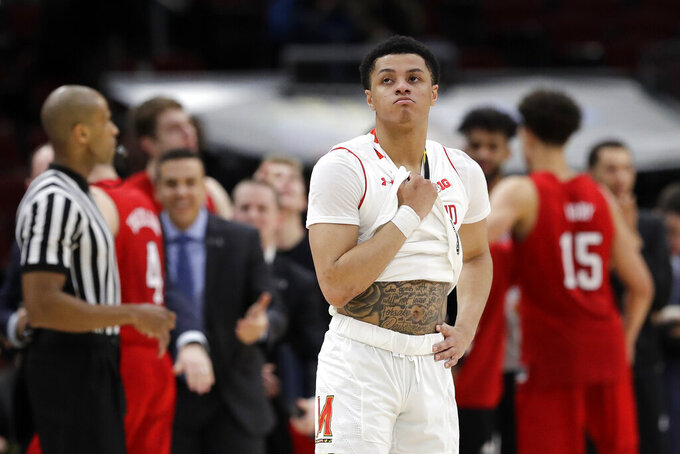 Maryland's Anthony Cowan Jr. reacts during the second half of an NCAA college basketball game against the Nebraska in the second round of the Big Ten Conference tournament, Thursday, March 14, 2019, in Chicago. The Nebraska won 69-61. (AP Photo/Nam Y. Huh)

CHICAGO (AP) — Once James Palmer Jr. pulled on his crisp red Nebraska jersey, it was mostly smooth sailing for the Cornhuskers.

Palmer scored 24 points after a late wardrobe change, and Nebraska shut down No. 21 Maryland 69-61 on Thursday for the first big surprise of the Big Ten Tournament.

Using a seven-man rotation because of injuries and backup guard Nana Akenten's suspension, the Cornhuskers harassed the Terrapins into 36 percent (18 for 50) shooting and 11 turnovers. Glynn Watson Jr. added 19 points, and Isaiah Roby finished with 15.

"We believe in each other. That's the main thing," Watson said.

Palmer went 8 for 13 from the field after he matched a career high with 34 points in Wednesday's tournament-opening victory over Rutgers. He played 40 minutes for the second straight day after realizing right before tip-off that he wasn't wearing his game jersey.

"Oh man. I was shocked because I've never done that before," Palmer said. "First time for everything. Lucky for me our manager Pat (Norris) got it to me in time."

Nebraska (18-15) earned a second win in the Big Ten tourney for the first time since 2016 and will face fourth-seeded Wisconsin on Friday afternoon. The Cornhuskers lost 62-51 to the Badgers on Jan. 29 in their only meeting of the season.

"A lot of teams would just say, we've got seven guys, there's no way, and they'd quit," coach Tim Miles said. "Not just say I quit, but they just wouldn't do those things. So I think that is probably that mentality is the thing I'm most proud of."

Maryland (22-10) swept Nebraska during the regular season, including a 60-45 win in Lincoln on Feb. 6. But the Terrapins — one of the youngest teams in the country — struggled offensively in their third loss in their last four games.

Bruno Fernando, who entered with averages of 14 points and 10.5 rebounds, was held to three points and eight boards. Anthony Cowan Jr. scored 17 of his 18 points in the second half, and Darryl Morsell finished with 14.

"I knew they were gonna double team me the whole time," Fernando said. "I just think they did a really good job of that and we got stagnant. I think we could have moved a lot more."

Coach Mark Turgeon was whistled for a technical foul with 8:25 left after no foul was called as Morsell drove up the court on a fast break. Watson then made two foul shots and Roby converted a three-point play, extending Nebraska's lead to 51-37 with 8:12 left.

"We've overcome a lot. We'll overcome this," Turgeon said. "We just didn't play well today. We'll get ourselves ready to go and hopefully play better in the NCAA Tournament."

Nebraska's Tanner Borchardt had nine rebounds as the Cornhuskers matched Maryland on the glass at 33 apiece. The Terrapins entered with one of the best rebounding margins in the nation at plus-8.8 per game.

Nebraska: A third game in three days is one tough order for the Cornhuskers, but they feel a lot better about themselves than they did a week ago. They have won three in a row since a stretch of 11 losses in 13 games.

Maryland: The Terrapins showed some fight in the second half, but they had to chase the Cornhuskers after a shaky start. They had just 20 points in the first half on 29 percent shooting.

Nebraska struggled offensively in its January loss to Wisconsin, shooting 28.3 percent from the field. The Badgers have won three in a row.

Maryland waits to see where it's going in the NCAA Tournament.