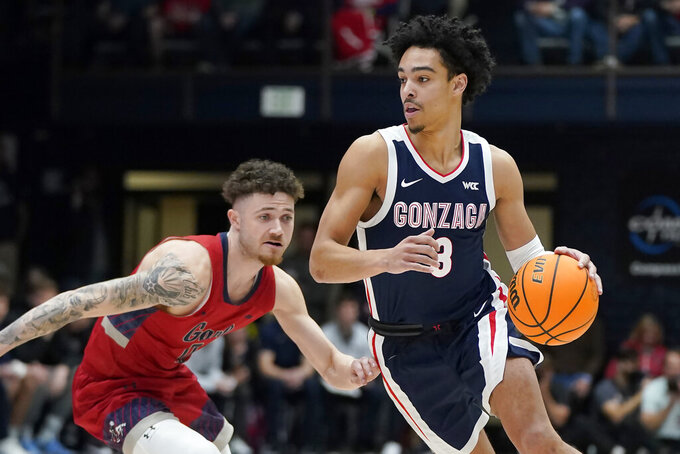 Gonzaga has two of college basketball's best big men and a roster loaded with talented players.

More often than not, Andrew Nembhard is the best player on the court.

A heady distributor who can also score, Nembhard is the orchestrator of top-ranked Gonzaga's highly efficient offense with a possible future in the NBA.

“He's been huge for us,” Gonzaga coach Mark Few said.

A five-star recruit out of Aurora, Ontario, Nembhard spent his first two seasons at Florida, averaging 9.5 points and 5.5 assists per game. The 6-foot-5 guard opted to transfer to Gonzaga and had an immediate impact.

Now a senior, he's taken on an even bigger role this season, averaging 11.7 points, 5.7 assists and 3.2 rebounds while still spearheading the top of the defense.

Nembhard has a high basketball IQ, often seeing plays before they develop, and seems to have a knack for rising to the challenge against bigger opponents. He had 24 points against UCLA, 16 against Texas Tech and 19 against Saint Mary's in the West Coast Conference title game.

With Nembhard at the helm, Gonzaga (26-3) led the nation in scoring and is the No. 1 overall seed in the NCAA Tournament for the second straight year. The Zags open the tournament against Georgia State on Thursday in Portland, Oregon.

“I love making plays for this team,” Nembhard said.

WEAKNESSES: Sometimes is too unselfish, shoots more of a push shot than a pure jump shot, could be a better rebounder.

Other prospects around the NCAA Tournament:

TyTy Washington, Kentucky. One of the top recruits in the 2021 class, the Wildcats' point guard has steadily climbed up NBA draft boards with a superb freshman season. The 6-3 guard has averaged 12.8 points, 3.9 assists and 3.5 rebounds.

Justin Lewis, Marquette. The 6-7 wing was not considered a top-100 recruit out of high school, but has had a superb sophomore season, averaging 17.1 points and 7.9 rebounds while leading the Golden Eagles to the NCAA Tournament.

James Akinjo, Baylor. The Arizona transfer has been the Bears' backcourt leader and go-to player, putting them in position to possibly repeat as national champions. The 6-1 senior has averaged 13.4 points and 5.6 assists this season.