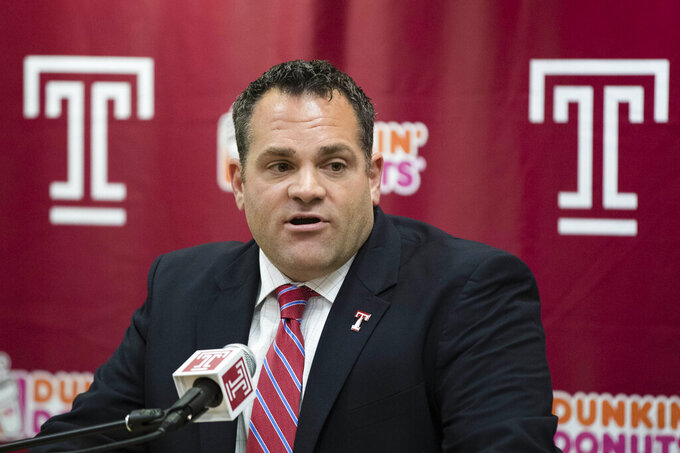 BOSTON (AP) — New Boston College athletic director Patrick Kraft hired two football coaches in his last three years at his old job, and it's fine with him if he doesn't have to do it again any time soon.

The former Temple AD, who was hired last week to take over in Chestnut Hill, inherits former Ohio State assistant Jeff Hafley, who was brought on by BC AD Martin Jarmond before he left to take over at UCLA.

“He is definitely a great hire,” Kraft said in a Zoom call with reporters — and many BC coaches, including Hafley. “I’ve had to make my share of hires in football. I am really excited to get together with Jeff and his staff. ... I believe in where Jeff's mind is, where he's going, what he wants to do, how hard he wants to work. I couldn't be more excited."

Kraft, 43, was a football player at Indiana who took over the Temple athletic department in 2015. After Matt Rhule left for Baylor, Kraft brought in Geoff Collins, and then hired Rod Carey when Collins left for Georgia Tech.

Hafley replaced Steve Addazio, who also came to BC from Temple but couldn’t break the Eagles out of the middle of the Atlantic Coast Conference. With Hafley, Kraft hopes that BC can compete for ACC titles like it last did in 2007 and ’08; the men's basketball team hasn't reached the NCAA Tournament since 2009.

“We will be champions, and we will not allow excuses to get in our way,” Kraft said. “Do I think we can compete in the ACC? There’s no doubt. ... I wouldn’t be here with you if I didn’t think there was an incredible opportunity to go win championships and compete at the highest level.”

That's what he's going to have to do to make an impact at BC, which has struggled to gain attention in a town focused on pro sports teams that have won 12 championships since 2001. (The BC hockey team has won four NCAA titles in that time under coach Jerry York.)

“It’s title town,” Kraft said, noting that Temple also had to compete with pro teams for attention in Philadelphia. “I also look at it as a positive: You all know sports.”

The Rev. William Leahy, Boston College’s president, praised Kraft’s efforts to improve the academic performance of Temple athletes. The school was fourth among FBS schools with an Academic Performance Rate of 993; the graduation rate of 90% was the best in school history.

Kraft is also a member of the NCAA Football Oversight and Football Competition committees.

“We wanted an individual who understood who we were,” Leahy said. “Pat Kraft certainly values expressions of academic excellence, believes in religious commitment and also says that athletics is important to the life of a university.”