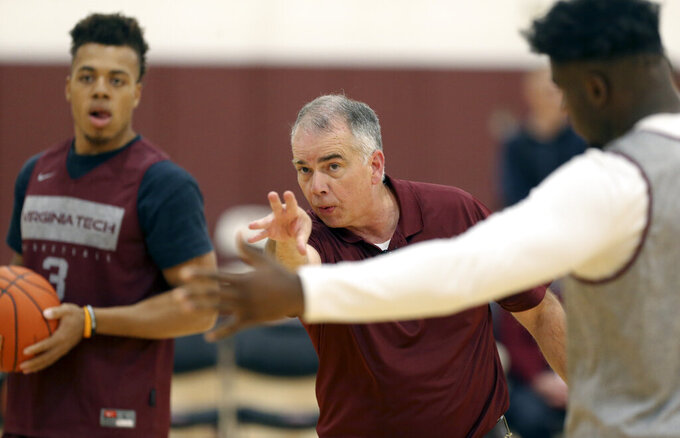 When he left Wofford after 30 years to take over the program that made him love basketball, Young persuaded what will be his small returning nucleus not to leave Blacksburg, Virginia, but he will still be hard-pressed to continue the success Buzz Williams brought to the school known more for football.

But Young persuaded point guard Wabissa Bede to leave the transfer portal and remain with the Hokies, and he convinced highly regarded guard Landers Nolley II, who redshirted last season, that Virginia Tech is still the place to be after Nolley, too, dabbled in the transfer portal.

Young still claims to be thrilled with his surroundings.

"I've said it before: I'm coaching basketball at Virginia Tech, and I'm the happiest guy on earth. Whatever lies ahead, bring it on," Young said.

The Hokies went to a program-record three straight NCAA Tournaments under Williams, who resigned after last season to take a job at Texas A&M, but Young inherits a program that looks more like the depleted one that Williams inherited than one still on the rise.

The departures of Blackshear, an effective inside scorer, and Clarke, the team's most athletic player, leave voids in points, rebounds and experience, but persuading Bede, who averaged 3.8 points and 2.3 assists, to stay was a big win for Young. The decision came after several meetings, Bede said.

Nolley, meanwhile, is a highly touted Williams recruit who sat out last season.

"He's got a very high basketball IQ. I've been impressed with that. He's as good as advertised," Young said.

Williams had great success transforming the Hokies into an upper-tier ACC program that fell 75-73 to Duke in the Sweet 16 last year, but his departure came in an offseason when the Hokies were going to lose their core, transfers or not. Young and the program are now where Williams was when he arrived at Tech — having to build from the ground up over the next several years.

The 6-foot-4 guard played in 21 games and scored 31 points as a freshman, but he will miss at least the start of the season. He announced on Instagram that he had suffered a season-ending injury during the offseason. He would be one of just five players on the roster with playing experience.

"I don't think there's any chance we could have him back before January, but if he's back in January, and he's healthy and we get the go ahead from our training staff, and I think Jonathan Kabongo could help us win basketball games, then he'll play," Young said.

The 6-5, 230-pound forward will go from averaging 13 minutes and scoring 97 points all season to a major role for the Hokies. He has shown flashes of inside toughness and playing bigger than his body, and he made 58% of his shots over two years, but he never has had to do it on an extended basis.

The Hokies averaged better than nine 3-pointers a game last season and shot 39.4% from beyond the arc but almost all of that long-distance marksmanship has moved on, giving Young a clean canvass with which to work installing his preferred style of play.

The Hokies open their 20-game Atlantic Coast Conference slate at Clemson on Nov. 5 and don't play another top-tier program until they face top-ranked Michigan State in the Maui Invitational on Nov. 25. They will also face No. 4 Duke twice, No. 9 North Carolina at Cassell Coliseum and No. 11 Virginia twice.