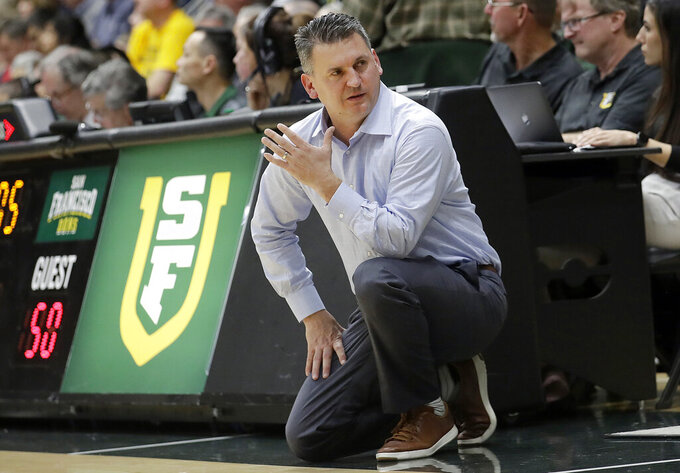 PULLMAN, Wash. (AP) — Kyle Smith has gotten right to work as the new head coach at Washington State. He's already held a couple of practices with his Cougars since being hired last week and is working to keep veteran players from leaving.

"All hands on deck," Smith said at his introductory news conference Monday. "Let's get better here."

The Cougars haven't had a winning season since 2012, and coach Ernie Kent was fired after going 58-98 over the past five seasons.

But Smith brings a winning pedigree to Pullman. He comes to Washington State after a successful three-year run at San Francisco during which he went 63-40 and became the first head coach in school history to win at least 20 games in each of his first three seasons.

Before landing the job at San Francisco, Smith went 102-81 in six seasons at Columbia, capping his run in New York by leading the Lions to the CIT title in 2016. He also has strong West Coast ties with his time as an assistant at Saint Mary's for nearly a decade.

Since arriving in Pullman, he's held practices for the returning players. He's also reached out to C.J. Elleby, one of the team's top players, who has declared for the NBA draft, and Jeff Pollard, who is seeking a transfer.

Elleby, who averaged better than 14 points per game last year, has shown up at the practices, Smith said.

"He is welcome back," Smith said.

As for Pollard: "You are welcome here brother," Smith said. "You are a Coug."

The 49-year-old Smith is highly regarded for his extensive use of analytics. "We stat everything we do," Smith said. "It makes you hard to beat."

While the Cougars have languished near the bottom of the conference in the past decade, Smith said that doesn't have to be the case. He said Washington State has adequate facilities to compete with other Pac-12 schools.

Forward Marvin Cannon said Smith has already made an impact. "He's a great coach, very knowledgeable about the game," Cannon said. "He's got a lot of energy."

Smith is excited to be part of the Pac-12 and could name the best coaches among the 18 who preceded him at Washington State, including George Raveling, Kelvin Sampson and Tony Bennett.

"I am humbled and honored to have a chance," Smith said.

He did not promise an immediate fix to the basketball program.

"There will be some rough patches," he said.

Washington State President Kirk Schulz said Smith will be given time to build the program. He was given a six-year contract worth $1.4 million annually.

Smith declined to identify who will be his assistant coaches, although he said he has commitments from two of them.