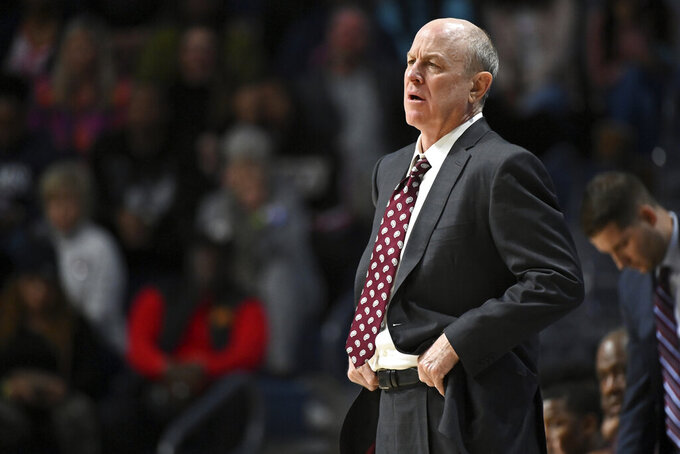 Mississippi State faces a taller task than usual to maintain its recent success under Ben Howland.

Four starters are gone from last year’s 20-11 squad (11-7 Southeastern Conference), including leading scorer/rebounder Reggie Perry, the Associated Press co-SEC player of the year. The group took with it 79% of the Bulldogs’ 73.4 points per game, offensive firepower that helped the Bulldogs earned a top-four seed in the conference tournament before the coronavirus pandemic canceled it.

Center Abdul Ado and two others who started at least eight games last season are back. MSU will lean on their experience and leadership until three transfers and six freshmen familiarize themselves with each other in one of Howland’s biggest roster turnovers since taking over the program.

“We have a team that’s very young,” the sixth-year coach said this week. “We’re going to play a lot of kids haven’t played Division I basketball before, so it’s going to be a real baptism.”

More will be expected offensively from the 6-foot-11 Adu, who averaged 6.7 rebounds and 5.7 points per game with 58 blocks while starting all 31 contests. Howland is encouraged by the senior’s effort to become more aggressive on offense, though it might be asking a lot for him to immediately be the type of post scorer that Perry (17.4 points) or Robert Woodard II (11.4) were for the Bulldogs.

Sophomore guards D.J. Stewart (8.5 points) and Iverson Molinar (5.9) appear ready to provide more, especially from the perimeter. State has also added transfers Javian Davis, Jalen Johnson and Tolu Smith, all of whom have shown potential to score in bunches.

Howland’s eight-man rotation — for now — might include some of the young newcomers, which says something about their transition and his expectations.

“I’ve had teams that were really young,” Howland said of his patience. “The thing is, they’re going to have so much more room in terms of a ceiling for growth because they’re so young. We’ve got to understand that and give them time to do that.

“This thing’s a process. But the bottom line is, we want to go in every game and expect to win.”

Some other things to watch as Mississippi State seeks its fourth consecutive 20-win season:

MSU landed the state’s top three prospects in 6-9 forward Derek Fountain, Keondre Montgomery and Cameron Matthews, both 6-7. Guard Deivon Smith, from Georgia, is considered the nation’s No. 69 prospect by ESPN.com. Guard Andersson Garcia is from the same high school (Hamilton Heights Christian Academy in Chattanooga, Tennessee) that produced Ado, while Reggie Morris averaged 14.7 points and 2.9 assists a season after leading Grandview (Missouri) High to the second of consecutive state titles.

Though Howland is emphasizing defense like most coaches, he’s also working to develop players’ confidence in their shooting. Besides drills and gadgets to improve their mechanics, he has installed about 20 plays with variations to involve everyone against different defenses.

“We spend an inordinate amount of time on shooting because at the end of the day, you’ve got to put the ball in the basket,” said Howland, whose team ranked second in the SEC in shooting (nearly 47%) last season. “There’s so much to put in.”

Howland said he will miss four home games the Bulldogs would normally use to get comfortable. Instead, the Bulldogs will open Nov. 25 against Clemson in Melbourne, Florida, at the Space Coast Challenge (formerly the Cancun Challenge, which was cancelled for this year). The two-day event will be played without spectators per coronavirus protocols. The field includes two-time Atlantic Sun champion Liberty and Big Ten member Purdue. Their non-conference schedule includes Dayton, Utah State and Iowa State in the SEC/Big 12 Challenge. SEC play begins Dec. 30 at Georgia.