New-look Virginia back to work after winning NCAA title 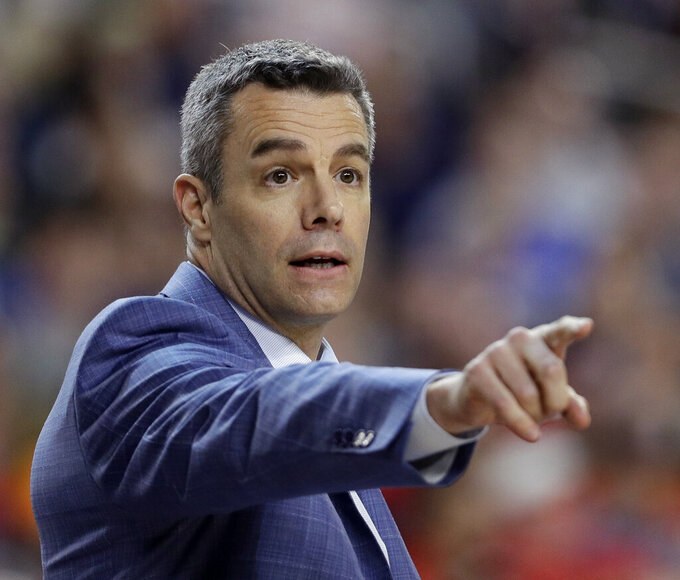 FILE - In this Monday, April 8, 2019 file photo, Virginia head coach Tony Bennett directs his team during the first half against Texas Tech in the championship game of the Final Four NCAA college basketball tournament in Minneapolis. Tony Bennett’s first offseason as a national champion coach has come with benefits on the recruiting trail. His first season at Virginia after winning the title, however, will bring challenges. (AP Photo/David J. Phillip, File)

Tony Bennett's first offseason as a national champion coach has come with benefits on the recruiting trail. His first season at Virginia after winning the title, however, will bring challenges.

Recruiting was already well underway before the Cavaliers won it all, but Bennett said Wednesday the result "certainly can't hurt and I think it has helped. It validates a lot of good stuff that's happened in the past."

Virginia opened its summer practice period on Tuesday, and Bennett said he's not sure just yet who will be ready to contribute.

"Everyone will have ample opportunity, the newcomers, so to speak," he said. "To say who, you just don't know. ... There are some opportunities out there. So it's the returners and we can go down the list of the guys we brought in, but I think they're excited about the opportunity.

"There's always a learning curve any time you go from whether it's high school to college or junior college to college or coming from a redshirt to being eligible. ... Going up a level and playing in the ACC, for any of these guys, there's the challenge of the physicality and the level of talent and the speed."

"We thought we needed to add some experience and a quality player on the perimeter and when he was mentioned and we did our homework and watched film and all those kinds of things," he said. "His personality came out as a young man of character and we always start there. He seemed wanting to challenge himself at a very high level."

The Cavaliers were delighted that Mamadi Diakite decided to come back for his senior year after testing the professional waters. And they added senior transfer Sam Hauser, who averaged 14.9 points and 7.2 rebounds last season at Marquette. Hauser will be eligible to practice with the team, but won't be able to play until 2020-21.

Bennett's offseason included numerous speaking engagements, recruiting, talking to NBA scouts about his players and some time to decompress.

He also checked an item off his bucket list when, with his father, longtime college coach Dick Bennett, he played Augusta National Golf Club, home of The Masters. That, he said, "was amazing."

"I'm grateful for the busy-ness of it," he said of the offseason. "It means something good happened."