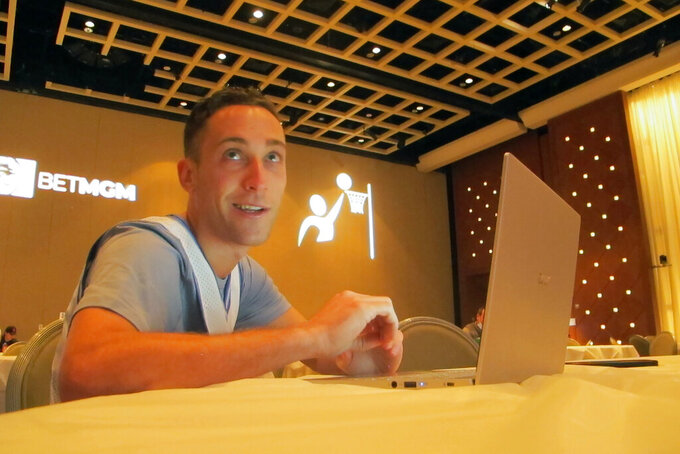 ATLANTIC CITY, N.J. (AP) — BetMGM took less than $100 worth of bets last year on New Jersey college basketball games that weren’t supposed to be wagered on. Now, it will pay a $25,000 fine.

State law prohibits betting on New Jersey college teams, as well as on any collegiate game played in New Jersey — even if they feature teams from other states. That same law is preventing fans of Jersey City-based Saint Peter's University from betting legally on their Cinderella team's Sweet 16 game Friday.

New Jersey voters had a chance to change this law last November, but overwhelmingly defeated a referendum that would have allowed such bets. The original ban stemmed concerns from some lawmakers about maintaining the integrity of college athletics.

If New Jersey fans want to bet legally on the Saint Peter's game, they will have to travel out of state to do it, with New York and Pennsylvania being close options.

In documents made public last week, New Jersey gambling regulators imposed the fine on BetMGM, which is allied with the Borgata casino, over bets placed on a tournament game and on a Rutgers University game.

The state Division of Gaming Enforcement said BetMGM accepted two bets on March 10, 2021 on a Metro Atlantic Athletic Conference tournament game between Niagara University and Marist College that was to be played in Atlantic City the next day.

The division fined BetMGM, but noted that the company blamed its technology partner, Entain PLC, for initiating the series of errors that led to the bets being improperly offered. BetMGM told the enforcement division that Entain normally initiates the creation of betting markets, a process that includes checking where the game is to be played, but Entain failed to flag the game as being played in New Jersey.

Neither BetMGM nor Entain responded to requests for comment Tuesday and Wednesday, but BetMGM entered into a settlement agreement with the state under which they will pay the $25,000 fine.

The enforcement division also said Entain's trading operations division failed to catch the error, even though it was required to manually verify the location of the game by looking at a spreadsheet of events and where they are to be played. The division also said the two companies employ an automated venue checking system, but added it was not used in this instance because a copy of the program was not functioning at the time.

A member of BetMGM's trading team noticed the error 40 minutes after the bets were offered, voided them and returned the money to the patrons who placed them.

Ten days later, the BetMGM and Borgata web sites offered a pre-made parlay, or multi-game bet combination, involving a Rutgers basketball game. It was available for eight hours before BetMGM noticed the error and took it down; only two people took the bet, for a total of $30.

The enforcement division said an Entain employee working in Australia created the parlay, but failed to recognize Rutgers as a New Jersey team and thus ineligible for betting.